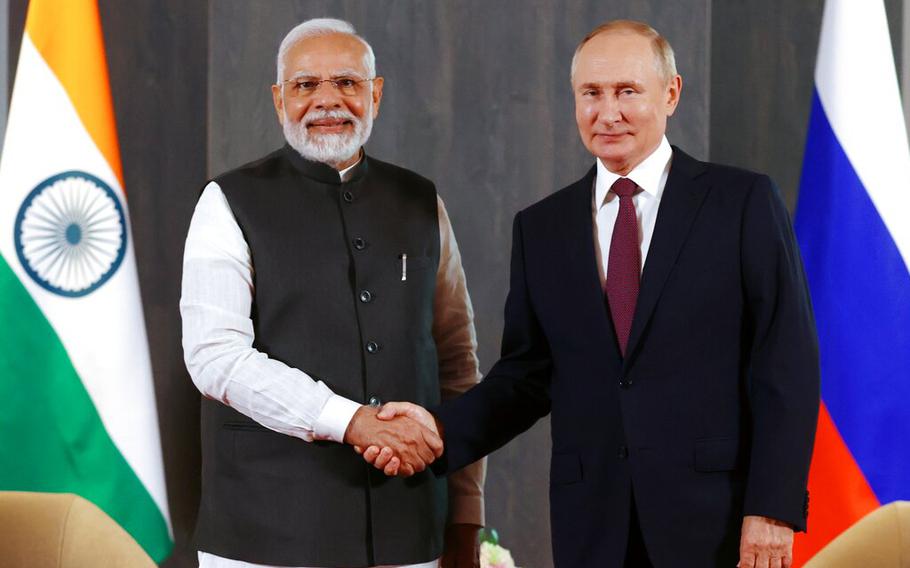 Bluntly challenged by Indian Prime Minister Nerandra Modi over the war in Ukraine, Russian President Vladimir Putin on Friday said that Russia would strive to stop the conflict "as soon as possible" but then blamed Ukraine for refusing to negotiate, though Putin ordered the invasion and his troops are still occupying a large swath of Ukrainian territory.

Putin's remarks came during an appearance with Modi, in Samarkand, Uzbekistan, where they are attending a meeting of the Shanghai Cooperation Organization.

In a stunning public rebuke, Modi told Putin: "Today's era is not an era of war, and I have spoken to you on the phone about this."

Modi's remark, as the two leaders sat in front of journalists and cameras, came a day after Putin acknowledged he had heard "concerns and questions" about the war from Chinese President Xi Jinping.

Responding to Modi, Putin said: "I know your position on the conflict in Ukraine, about your concerns that you constantly express. We will do our best to stop this as soon as possible. Only, unfortunately, the opposing side, the leadership of Ukraine, announced its abandonment of the negotiation process, declared that it wants to achieve its goals by military means, as they say, 'on the battlefield.' Nevertheless, we will always keep you informed of what is happening there."

Russia has been hit hard by Western sanctions over the war and has been relying on continued trade with India and China, including sales of oil and natural gas, as a financial lifeline.

The questions and criticism from Xi and Modi are just the latest pressure on the Russian president.

In recent days, Russia has suffered steep military setbacks in recent days as a Ukrainian counteroffensive pushed Russian occupying troops out of the northeastern Kharkiv region. Ukraine is push forward with that offensive and has called on allies to supply additional weapons in hopes of tipping the war decisively in its favor.

Putin launched the full-scale invasion of Ukraine in February, and his troops initially tried to seize Kyiv, the capital, with the intent of toppling the government of President Volodymyr Zelensky. That failed, as Ukrainian forces pushed the Russians into a messy retreat.

Russia has suffered tens of thousands of casualties and the war increasingly looks unwinnable. Many analysts say that despite Ukraine's recent gains, the fighting could go on for months if not years.

Russia and India for years have enjoyed a close bilateral cooperation but, as with China, Putin's decision to invade Ukraine has tested the relationship.

On Friday, Moscow suffered addition setbacks as it continues to lose its military footing in eastern and southeastern Ukraine. At least five pro-Russian officials working in occupied Ukrainian territories died as a result of explosions and strikes, which Moscow blamed on Kyiv.