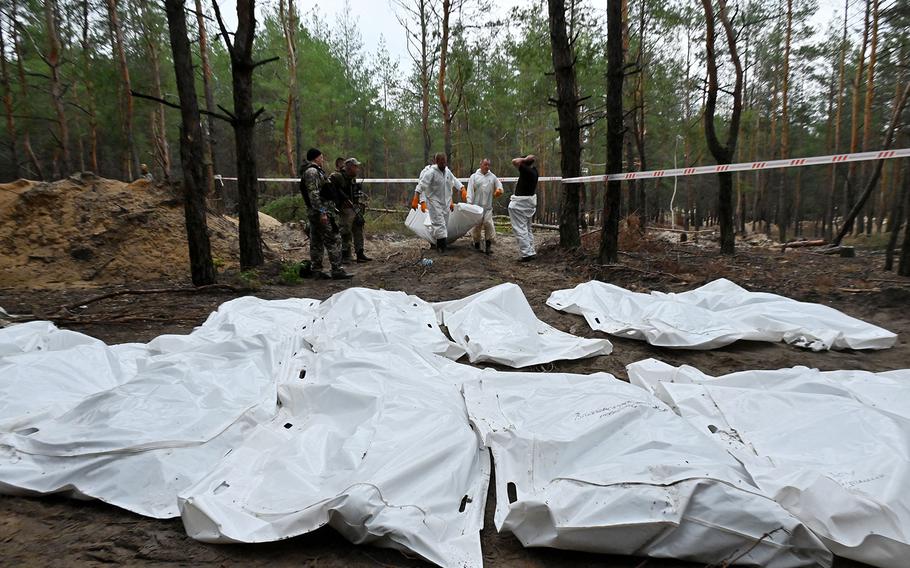 Forensic technicians carry a body bag in a forest on the outskirts of Izyum, eastern Ukraine on Sept. 16, 2022. (Sergey Bobok/AFP via Getty Images/TNS)

WASHINGTON — Secretary of State Antony Blinken reiterated the U.S. claim that Russia is committing war crimes in Ukraine amid reports that Ukrainian forces had uncovered a mass grave in the city of Izyum, while again pushing back against pressure to designate Russia a state sponsor of terrorism.

Reports of a mass grave in the retaken city of Izyum are "part, horrifically, of a continuum, an ongoing story," Blinken told reporters at a briefing. "Whenever we see the Russian tide recede from the parts of Ukraine that it's occupied, we see what's left in its wake."

He said it was important for Ukraine and its partners "to build the evidence and document the atrocities that have been committed — and in many instances, these amount to war crimes."

Blinken's comments echoed remarks by Ukrainian President Volodymyr Zelenskyy, who said Friday that the Kremlin must be held accountable for war crimes. Ukraine's defense ministry said investigators had discovered some 440 unmarked burial spots in Izyum after Ukrainian forces pushed Russian troops from the area in a recent counteroffensive.

Zelenskyy made an unannounced visit to Izyum on Wednesday and raised the Ukrainian flag, making a show of Kyiv's resolve in recapturing most of the region and pressing southeast toward Donbas.

In March, Blinken said the U.S. government assessed Russia was committing war crimes in Ukraine. Russia has repeatedly denied the allegation, saying in that purported scenes of atrocities were staged or faked by Ukrainian forces after Russian soldiers left.

Blinken again pushed back against the idea of designating Russia a state sponsor of terrorism — an idea that is gaining bipartisan support in Congress. Blinken reiterated his stance that current sanctions already achieve the same result and a designation could have unintended consequences.

He said the administration is working with Congress on another way forward.