First and only responders: Ukrainian firefighters at the front 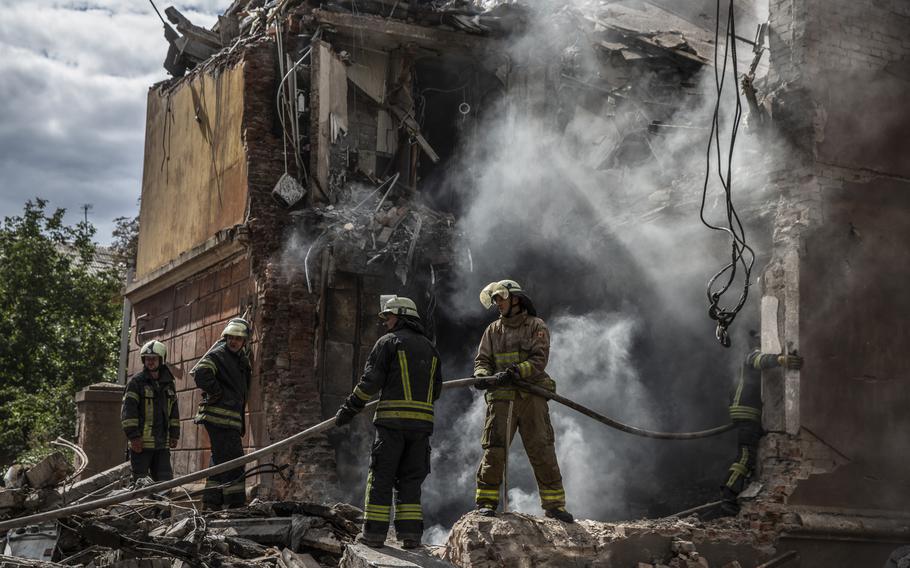 Firefighters work at a heavily damaged residential building on Sept. 8, 2022, in the eastern city of Sloviansk, Ukraine. (Heidi Levine/for The Washington Post)

SLOVYANSK, Ukraine — Shortly after 4 a.m. Wednesday, Serhii Moskalets woke to the sound of a boom. Moments later his phone rang, as he knew it would. For the fire chief of a city being bombarded by Russian artillery, restful nights were an early casualty of war.

"I usually wake up about that hour even when it is quiet," Moskalets said. "That is when they tend to hit us."

This time it was a rocket, said the dispatcher. A building on Torska Street was struck: multiple floors on fire; massive structural damage. People were inside.

In peacetime, the Slovyansk fire department's work was largely limited to grass fires in the surrounding countryside and the kitchen and trash blazes typical for a city of 100,000.

Now, Moskalets began to suit up for his new normal: burning blocks, collapsing building, mass casualties. His team has responded to more than 250 such events since June, when Russian artillery began to target the city as part of Moscow's push to take over most of Ukraine's eastern Donbas region. After one brutal barrage in July, his crews were battling 10 major blazes at one time. 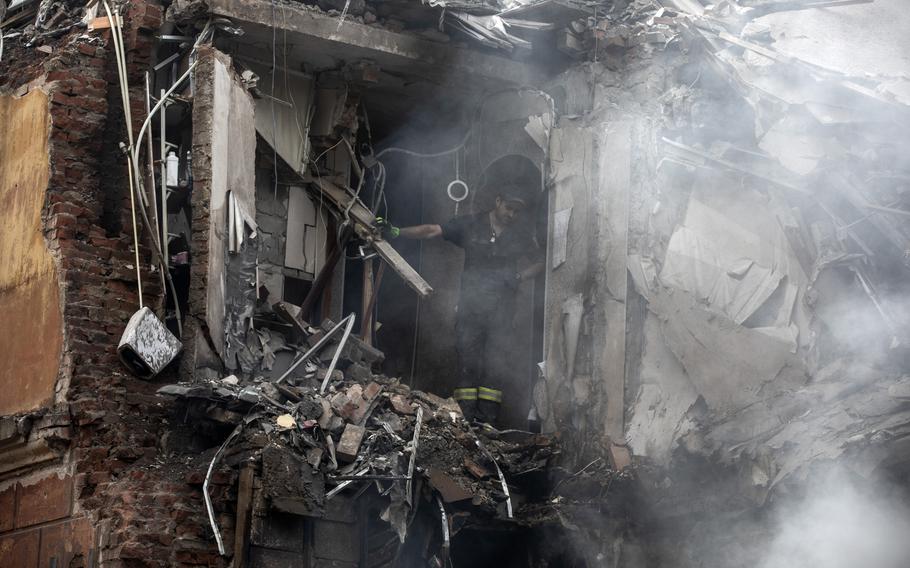 Firefighters work at a heavily damaged residential building as they look for victims after a Russian attack on Sept. 8, 2022, in the eastern city of Sloviansk, Ukraine. (Heidi Levine/for The Washington Post)

Firefighters are generally considered noncombatants under the rules of war — Moskalets said they never carry arms to comply with Geneva Conventions — but departments like his are fully engulfed by the battle for Ukraine. The workload is enormous, shifts are unending, and an already dangerous job must now be done in combat conditions.

"They rush to the places where the Russian missiles hit moments after they land there, and don't even wait for the air-raid sirens to stop," said Vadim Lyakh, head of Slovyansk's military administration.

As Moskalets pulled on protective gear that still smelled of smoke from the last catastrophe, his battalion's first engine pulled up some distance from the three-story block of apartments near the city center, a blaze visible in the back corner. Serhii Chaban, the crew's field supervisor, jumped out, checked to make sure no one needed immediate first aid and began to scan the area.

In normal times, the truck would get closer, faster. But wartime protocols now dictate they scout for hazards, such as shrapnel that could shred a tire and make a fast evacuation impossible, or something worse.

"Our biggest concern is unexploded ordnance," Moskalets said. "We have found cluster bombs, ballistic rockets. We can't get too close."

Their other fear is a second attack, the so-called "double-knock" that hits after first responders have arrived on the scene. A few weeks ago, this same battalion was dousing a blaze set off by artillery on the outskirts of town when another shell landed less than 500 feet away.

"They target us," Moskalets said. "It's hard to hide a firetruck."

Six firefighters from the area have been killed and 23 injured since the invasion began, according to Donetsk Regional Emergency Services. The fire station in the hard-hit city of Bakhmut had its windows blown out and garage doors shredded by a shell on Thursday morning, one of at least 14 fire-rescue buildings damaged by attacks in the region.

At the scene, some of the men began dragging hoses from a pumper truck. One firefighter worked a hydraulic wedge into the warped entry door of an adjacent section of the building, popping it free. Five residents who had been trapped inside swarmed out into the cool morning air.

Other firefighters interviewed the crowds of neighbors and residents gathered nearby to learn more about the building. At least three people lived in the section that was hit, they were told, two on the third floor and one on the ground level. Most of those apartments were now part of the burning pancake of beams and rafters collapsed into the basement. The chance of survival was tiny.

"We always have hope," Moskalets said. 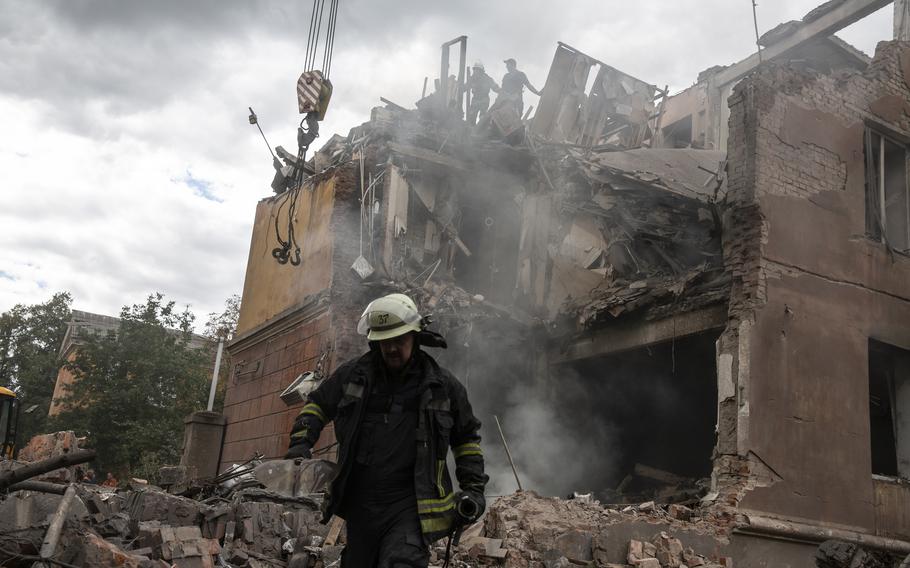 Firefighters work at a heavily damaged residential building as they look for victims after a Russian attack on Sept. 8, 2022, in the eastern city of Sloviansk, Ukraine. (Heidi Levine/for The Washington Post)

The crew would proceed the same, whether it was a rescue or recovery. First, they had to douse the fire.

But water is a problem in a city under siege. The municipal supply dries up when the power is cut by shelling, and one of the fire department's new jobs is trucking water from the treatment plant to 80 plastic tanks that the government has placed around the city.

Now, their tanker truck was supplying their hoses. By the time the sun was above the rooflines, the flames were extinguished and the more dangerous work could begin.

The crew eyeballed the tilting hunks of concrete and brick looming over the cavity where they would be working for the next hours. Three of the four beams supporting the upper floors had been destroyed. The firefighters needed the last one to hold.

Moskalets, whose wife and daughters long ago left Slovyansk for the safety of Dnipro, repeated one of his favorite phrases: "Who else is going to do it?"

By 10 a.m., a crane belonging to the city water department had backed up to the edge of the smoking crater. Moskalets, Chaban, and three others jumped into the blackened pit to begin reverse engineering the collapse. Relaying signals to the crane operator, they tied the cables to one massive section of concrete and rebar after another, ducking to one side when the crushing loads swung overhead.

It is not a skill they learned in training, and sometimes the beams slip, said Edic Kravchuk, the crane operator. He, too, has seen his job transformed in recent months, from laying water mains to unpacking disaster areas.

"The main thing is how they tie off the load," Kravchuk said. "Sometimes I have to jump down and show them." 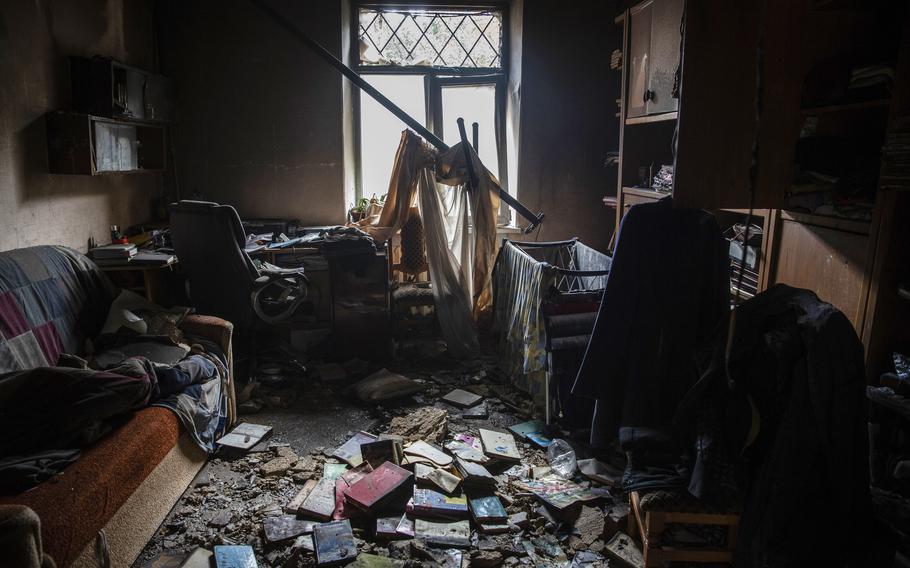 The interior of an apartment at a heavily damaged residential building as firefighters look for victims after a Russian attack on Sept. 8, 2022, in the eastern city of Sloviansk, Ukraine. (Heidi Levine/for The Washington Post)

By noon, they had lifted more than a dozen chunks from the hole. More firefighters jumped down to shovel muddy soot and pull out smaller debris. One of them tugged on a pinned blanket.

"Misha, move all the stuff where you are standing to the side, where this blanket is," said one, squatting by a concrete slab. "Can we hook the cable somehow here?"

The hooks came down and the men gave Kravchuk a thumbs up for the lift. But suddenly they yelled for him to stop. The cables quivered. The crew fell silent. Kravchuk killed the crane's engine.

They had found a body.

The 58-year-old man had left the area earlier in the invasion, police said, declining to identify the victim by name. He had returned recently to Slovyansk to collect some of his belongings, only to become one of at least 22 city residents killed by Russian strikes so far.

It would take three more hours to uncover the bodies of the other two residents, a total of 12 hazardous hours of effort before the firefighters could return to their station.

There, where showers and electricity were iffy and their families were only visions on a screen, they would wait for the next call to come. 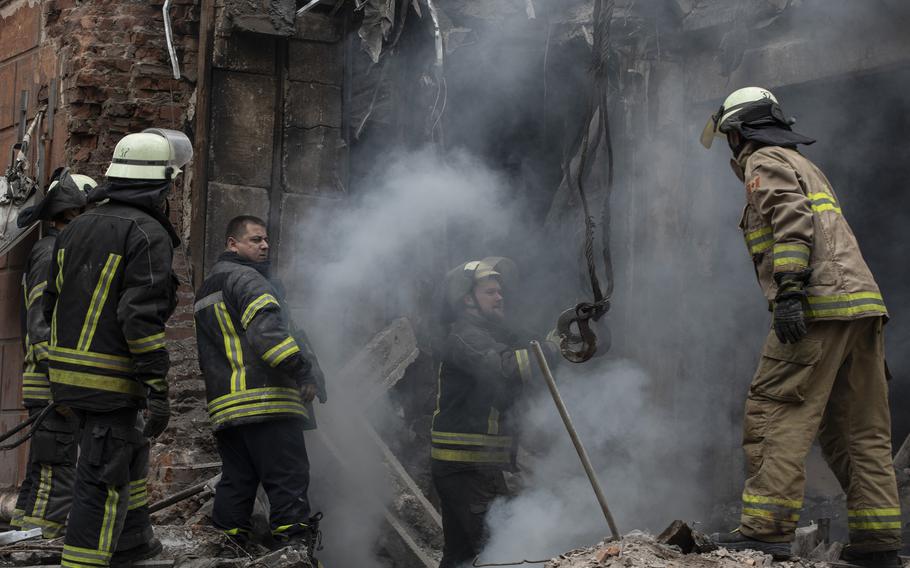 Serhii Moskalets, second from left, is the head of the rescue station in Sloviansk. He’s pictured with his fellow firefighters as they work on a heavily damaged building. (Heidi Levine/for The Washington Post)