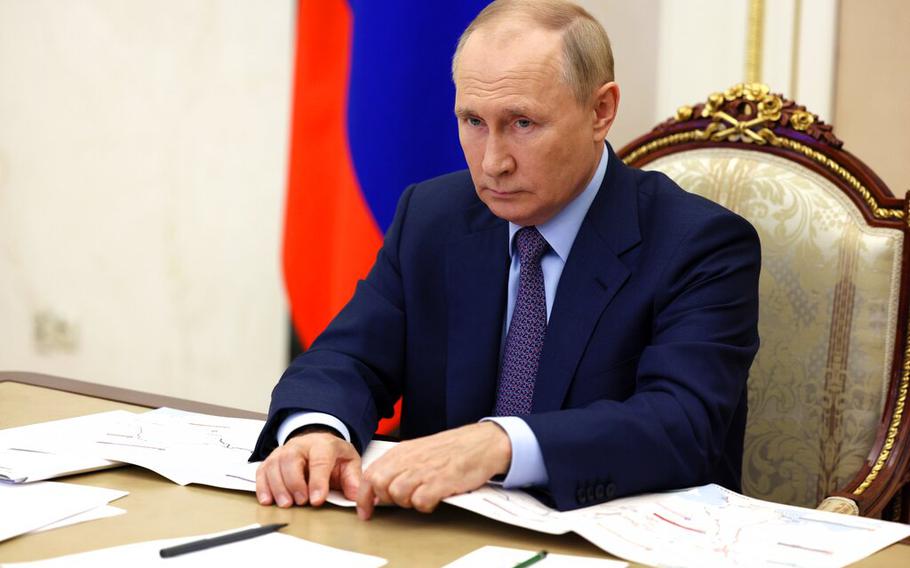 A group of district council members in St. Petersburg, President Vladimir Putin's hometown, called for the Russian leader to be charged with treason and removed from office in a rare but brazen protest against the war in Ukraine.

The brave move by the Smolninsky District Council drew a predictably swift and unfriendly reaction. A day after the resolution against Putin was made public, a local police station told the lawmakers they were facing legal charges "due to actions aimed at discrediting the current Russian government."

The district council's statement came in the form of a request to the Russian parliament, the State Duma, and asserted that Putin's decision to invade Ukraine on Feb. 24 led to a massive loss of life, turned countless Russian men into disabled veterans, hindered the national economy, and fast-tracked NATO's eastward expansion.

A second municipal council in Moscow's Lomonosovsky district followed suit and voted on a similar motion calling on Putin to resign. Outspoken criticism of Putin is rare, and while the two motions were little more than symbolic statements, they represented a remarkable public rebuke. They also served as evidence that public support for the war in Ukraine is not universal, and could be eroding as a recent survey of Russian public opinion found.

"We believe that the decision made by President Putin to start the special military operation is detrimental to the security of Russia and its citizens," the Smolninsky document filed on Wednesday evening said.

"We ask you," the lawmakers wrote, "to initiate a treason charge against the president of the Russian Federation to remove him from office."

Putin grew up in the Smolninsky neighborhood and began his career in St. Petersburg, where he served as a deputy mayor. Many of the Russian president's closest friends still live in St. Petersburg where some of them have grown fabulously wealthy during Putin's 22 years as the country's supreme leader.

The State Duma is controlled by Putin's United Russia party and is effectively his rubber stamp, at times adopting his policies by unanimous vote.

The resolution's authors conceded that they had little hope their request would be acted but that they believed they achieved their largely symbolic goal: to let other antiwar Russians know that they are not alone in their sentiment, which is often drowned out by the state's militaristic rhetoric, echoed by propagandists on state-controlled television.

The Kremlin has outlawed criticism of the war, and has initiated a further crackdown on dissent, including from journalists.

"We understand that Putin won't shed a tear and stop the operation," Nikita Yuferev, one of the seven councilors who wrote the document, said in an interview with The Washington Post. "These requests are written for people who are still in Russia and for whom the propaganda tries to assure that they are the minority, that there are no people who are against this."

The Lomonosovsky district's statement slammed Putin's rhetoric and urged him to step side.

"The rhetoric you and your subordinates use is full of intolerance and aggression," the statement said. "People once again fear and hate Russia while we threaten the whole world with nuclear weapons." The Lomonosovsky district added: "Therefore, we ask for you to be relieved of your duties as your views and governance model are hopelessly outdated."

Yuferev said that after their request went viral on Russian social media, the councilors received a "flurry" of letters of support from people offering anything from legal help to donations to cover the fines that will likely be imposed on the politicians.

In March, the Smolninsky councilors also wrote a letter to Putin urging him to stop the war as "the fate of thousands of Russian servicemen and millions Ukrainians are at stake."

Shortly, after Russian troops marched across the border, the Kremlin dialed up the level of the repressions against its opponents, outlawing the use of the word "war" when talking about the invasion and threatening those who publicly criticize the Russian army with fines and jail terms. Thousands fled the country, and hundreds have been fined or detained for antiwar demonstrations.

While Putin is unlikely to face any charges, the lawmakers are already under pressure and face at least a fine.

Just a day after the document went public, Yuferev received a text message from a local police station ordering him to come in to testify in proceedings launched against him and other council members "due to actions aimed at discrediting the current Russian government."

"We are sure that we have not violated anything as we acted strictly in accordance with the lawful procedure written in the Constitution," Yuferev said. "Of course, we live in a country where even if everything is done legally but there is a desire to punish us, it will be done . . . but we can manage a 50,000 rubles fine." (At current exchange rates, the fine amounts to about $850.)