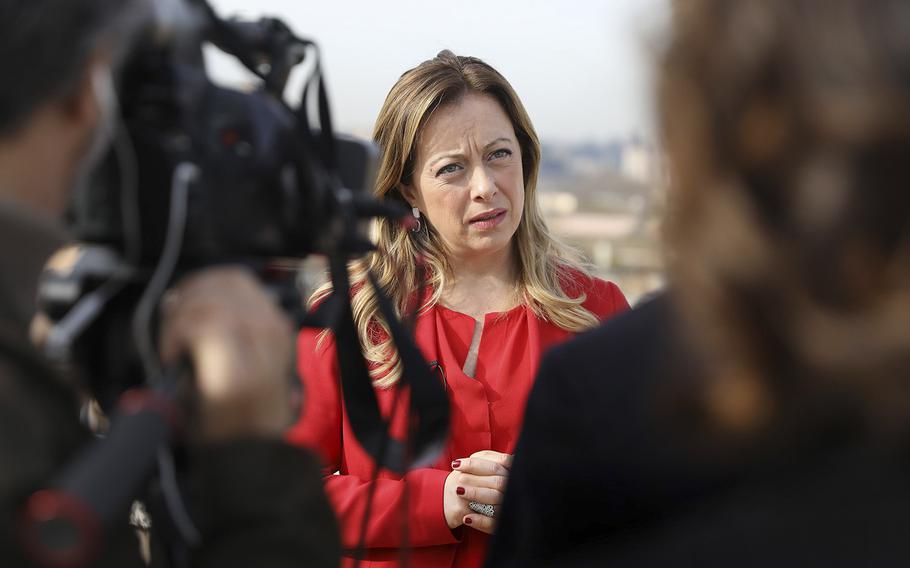 Giorgia Meloni, leader of the Brothers of Italy party, speaks during an interview in Rome on Feb. 3, 2020. (Alessia Pierdomenico/Bloomberg)

Italy's right-wing coalition, led by Giorgia Meloni's Brothers of Italy, is poised for a landslide win on Sept. 25, according to the last available polls before a blackout period.

The bloc has an advantage of almost 20 percentage points on the center-left coalition led by Enrico Letta's Democratic Party, according to Bloomberg's latest polling average. Such an advantage, thanks to Italy's complex electoral system, might grant it a two-thirds majority of seats in both houses of parliament, enough to change Italy's constitution on its own.

Support for Meloni's Brothers of Italy has been growing steadily since she took center stage in the campaign. At 45, Meloni, who started her political career in Italy's post-fascist party, is a political veteran but has almost no government experience. As the frontrunner to become the next prime minister, she has vowed to maintain the course set by outgoing Prime Minister Mario Draghi on support for Ukraine and fiscal discipline.

Meloni's party has also been benefiting from the decline of her two allies, Silvio Berlusconi's Forza Italia and the anti-immigrant League, led by Matteo Salvini. The latter has even been overtaken by the Five Star Movement, whose moribund electoral fortunes have been revived by former Prime Minister Giuseppe Conte's decision to move the party's electoral platform resolutely to the left.

Even so, Meloni could find herself in a position of power that few other prime ministers have held in Italy before.

An Ipsos poll for Corriere della Sera showed that Brothers of Italy could have a majority with the anti-immigration League, without the support of Berlusconi's party. Separately, a Tecne' poll published on Monday projected 252 to 262 seats for Meloni's coalition in Italy's lower house out of 400 available. In the upper house, the bloc could get 125-133 seats out of 200. This would be enough to change Italy's constitution without a referendum.

Meanwhile, Letta's center-left coalition has lost 1.3 percentage point to 28.2% in Bloomberg's polling average in the past two weeks. The Democrats broke their alliance with Five Star and failed to join forces with a centrist coalition, which has been steadily gaining in the polls.

A poll blackout goes into force on Saturday, two weeks before the vote.