Blinken visits Kyiv in new US show of support for Ukraine 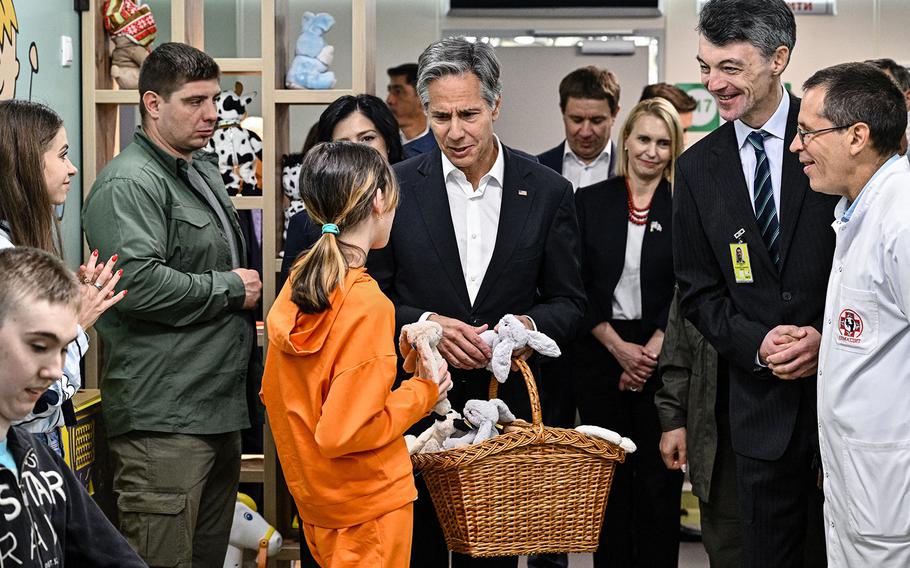 U.S. Secretary of State Antony Blinken meets children during his visit to a children’s hospital in Kyiv on Sept. 8, 2022. (Genya Savilov/Pool/AFP via Getty Images/TNS)

(Tribune News Service) — U.S. Secretary of State Antony Blinken made an unannounced visit to Kyiv Thursday for meetings with Ukrainian officials as the country's military presses to regain territory that Russia seized in the first six months of its invasion.

The trip to Ukraine is Blinken's third since the start of the war on Feb. 24 and his fifth since becoming the Biden administration's top diplomat, according to the State Department.

Blinken met with Ukrainian Foreign Minister Dmytro Kuleba for about 30 minutes. He also visited a children's hospital in Kyiv, where he met some of the patients, as well as Patron, a Jack Russell terrier that has helped Ukraine's military find more than 200 mines laid by Russian forces.

The visit was timed to a consequential moment for Ukraine, which celebrated its independence day on Aug. 24, a senior State Department official, speaking to reporters on customary condition of anonymity, told reporters. That day also marked six months since Russia invaded.

The U.S. is planning to provide another $2 billion in foreign military financing to back Ukraine's efforts as well as 18 neighboring nations, including NATO allies, according to a State Department official.

U.S. Defense Secretary Lloyd Austin, who is in Germany to host a meeting of the Ukraine Contact Group, announced on Thursday an additional package of up to $675 million in new military hardware including more High Mobility Artillery Rocket Systems, or HIMARS, along with anti-armor mines, howitzers, grenade launchers, Humvees and armored medical vehicles. The equipment will be drawn from US inventory and brings the administration's security assistance to Ukraine to $13.5 billion since the start of the invasion.

Last week, the White House asked Congress for an additional $11.7 billion in security and economic help for Ukraine in the first quarter of fiscal 2023, in what one US official said last week was an urgent request. In May, President Joe Biden signed legislation providing $40 billion in aid to Ukraine.

On Thursday, Biden will host a call with leaders from the Group of Seven, NATO and European Union about next steps in support of Ukraine against Russia's invasion, according to people familiar with the matter.

Blinken's trip to Kyiv follows calls by the International Atomic Energy Agency to establish a security zone around Ukraine's Zaporizhzhia Nuclear Power Plant, which has sustained damage and remains under Russian control. An IAEA team visited the site last week.

Blinken's latest trip was conducted in strict secrecy. It wasn't announced beforehand and the reporters who joined him on the trip were left in Poland while he took an 11-hour train ride to Kyiv to avoid air travel over Ukraine's contested skies.