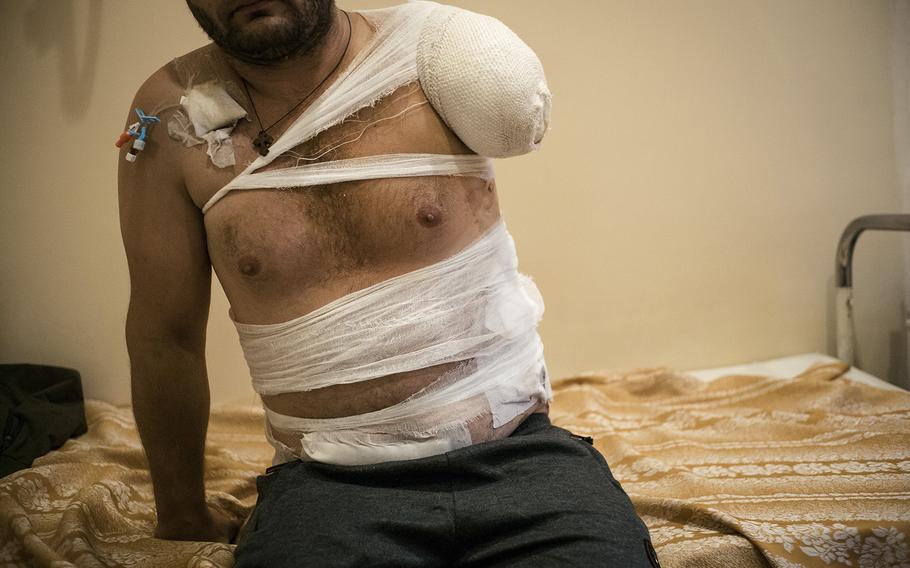 SOUTHERN UKRAINE — In dimly lit hospital rooms in southern Ukraine, soldiers with severed limbs, shrapnel wounds, mangled hands and shattered joints recounted the lopsided disadvantages their units faced in the early days of a new offensive to expel Russian forces from the strategic city of Kherson.

The soldiers said they lacked the artillery needed to dislodge Russia's entrenched forces and described a yawning technology gap with their better-equipped adversaries. The interviews provided some of the first direct accounts of a push to retake captured territory that is so sensitive, Ukrainian military commanders have barred reporters from visiting the front lines.

"They used everything on us," said Denys, a 33-year-old Ukrainian soldier whose unit fell back from a Russian-held village after a lengthy barrage of cluster bombs, phosphorous munitions and mortars. "Who can survive an attack for five hours like that?" he said.

Denys and eight other Ukrainian soldiers from seven different units provided rare descriptions of the Kherson counteroffensive in the south, the most ambitious military operation by Kyiv since the expulsion of Russian forces at the perimeter of the capital in the spring. As in the battle for Kyiv, Ukraine's success is hardly assured and the soldiers' accounts signaled that a long fight, and many more casualties, lie ahead.

"We lost five people for every one they did," said Ihor, a 30-year-old platoon commander who injured his back when the tank he was riding in crashed into a ditch.

The soldiers were interviewed on gurneys and wheelchairs as they recovered from injuries sustained in last week's offensive. Some spoke on the condition of anonymity to avoid disciplinary action. Others, like Denys and Ihor, agreed to reveal only their first names. But most spoke plainly about the disadvantages they faced.

Russia's Orlan drones exposed Ukrainian positions from more than a kilometer above their heads, they said, an altitude that meant they never heard the buzz of the aircraft tracking their movements.

Russian tanks emerged from newly built cement fortifications to blast infantry with large-caliber artillery, the wounded Ukrainian soldiers said. The vehicles would then shrink back beneath the concrete shelters, shielded from mortar and rocket fire.

Counter-battery radar systems automatically detected and located Ukrainians who were targeting the Russians with projectiles, unleashing a barrage of artillery fire in response.

Russian hacking tools hijacked the drones of Ukrainian operators, who saw their aircraft drift away helplessly behind enemy lines.

Ukraine has discouraged coverage of the offensive, resulting in an information lag on a potentially pivotal inflection point in the nearly seven-month conflict.

When Ihor fired on Russian soldiers with his Kalashnikov rifle this week, he said, it was his first time shooting at a human being. "You don't think about anything," he said. "You understand, if you don't do it, they will do it."

Despite the challenges, Ihor said he is eager to return to the front line as soon as he heals. "My people are there. How can I leave them?" he said.

Other soldiers won't be returning to the battlefield. 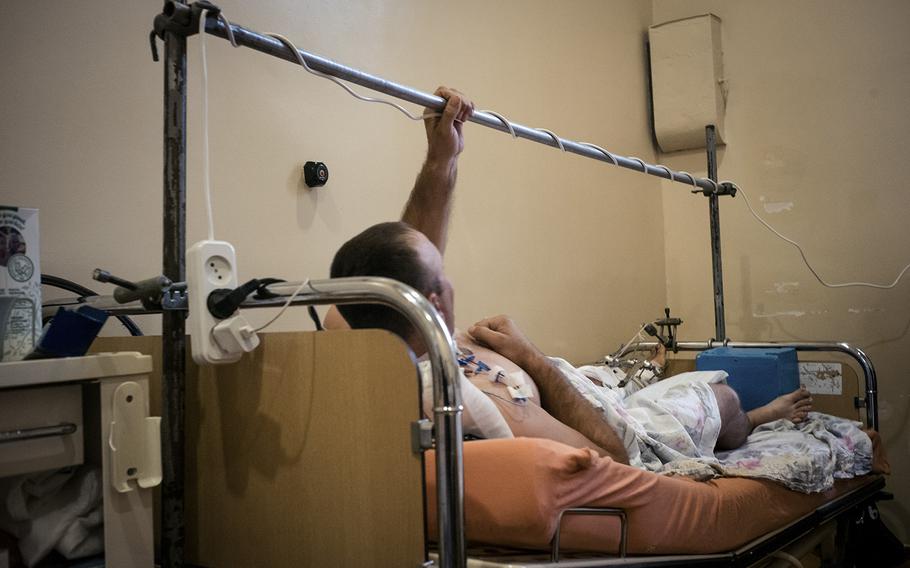 A Ukrainian soldier wounded during early fighting in the new offensive in the Kherson region is cared for at a medical facility in southern Ukraine. Ukrainian forces are pushing to retake territory occupied by Russia. (For The Washington Post) 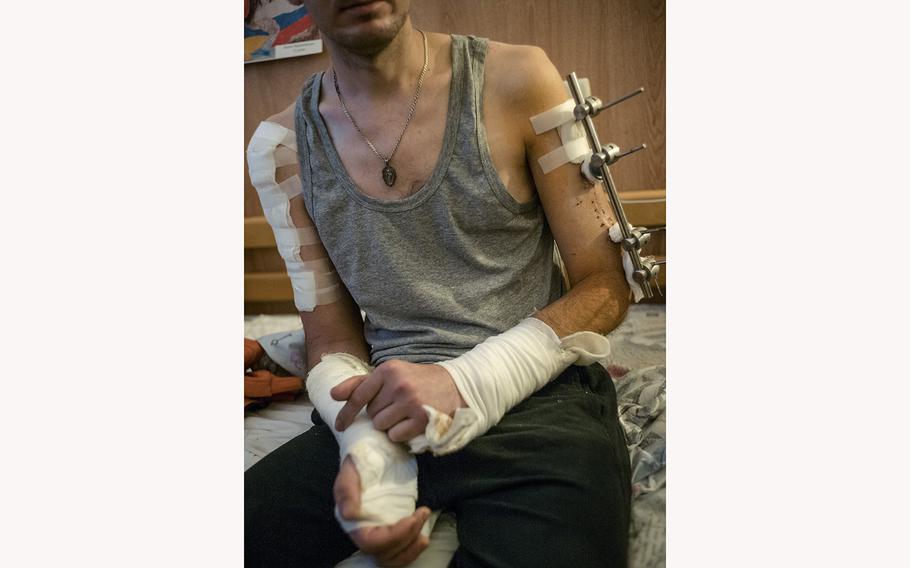 Ukrainian soldier Ruslan, 30, was wounded while fighting in Kherson. (For The Washington Post)

Oleksandr, a 28-year-old former construction worker, lost his arm in a mortar blast during the counteroffensive last week. He winced with phantom pain in his hospital bed on Sunday, saying he felt a sting from the fingers and hand that were no longer connected to his body.

Oleksandr said the Russian artillery fire was relentless. "They were just hitting us all the time," he said. "If we fire three mortars, they fire 20 in return."

The Ukrainian soldiers said they had to carefully ration their use of munitions but even when they did fire, they had trouble hitting targets. "When you give the coordinates, it's supposed to be accurate but it's not," he said, noting that his equipment dated back to 1989.

Oleksandr had never traveled to Kherson before the war, but he said the goal of expelling Russian invaders was worth sacrificing a limb. "It's our country," he said.

President Volodymyr Zelensky said that Ukraine's forces retook two villages in the Kherson region, and one of his aides posted an image of the Ukrainian flag being hoisted over the village of Vysokopillya over the weekend.

"Ukrainian flags are returning to the places where they should be," Zelensky said in a video address. But it was impossible to gauge what progress Ukrainian forces have made in their push to expel the Russian invaders from Kherson.

The region, which was captured by Russia earlier in the war forms a crucial part of Russian President Vladimir Putin's coveted "land bridge" to Crimea, the peninsula that Russia invaded and annexed in violation of international law in 2014.

However bloody the fight, the Ukrainian soldiers said they saw no alternative.

"If we don't stop them, they're going to just rape and murder our people like they did everywhere else," said Oleksandr's roommate in the hospital, a 49-year-old conscripted soldier who asked to be called by his nickname, "Pinochet."

Pinochet said his knee was shattered by shrapnel from a mortar that was fired after a drone spotted him in last week's counteroffensive. He said that while Ukrainian casualties are significant, the side that wages an offensive always loses more soldiers.

"There's nothing we can do about it," Pinochet said. "And we can still win."

"When we turn on mobile phones or radio, they can recognize our presence immediately," said Denys. "And then the shooting starts."

Despite the ban on media visits to the front line, there were signs that Russia's grip on Kherson might be loosening.

In a statement on Monday, a Kremlin-backed occupation authority said that plans for a staged referendum in the Kherson region, a precursor to Russian annexation, were put on hold due to security issues. The Russian statement was later walked back, but it gave the Ukrainians optimism and suggested that, at the least, the counteroffensive was causing some disarray for the Russians.

Kyiv is hoping that the Kherson counteroffensive will boost national morale and demonstrate to Western governments that their billions of dollars in economic and military assistance is paying off, even as sanctions against Russia have raised energy prices and inflation and raised fears of an even more expensive winter. 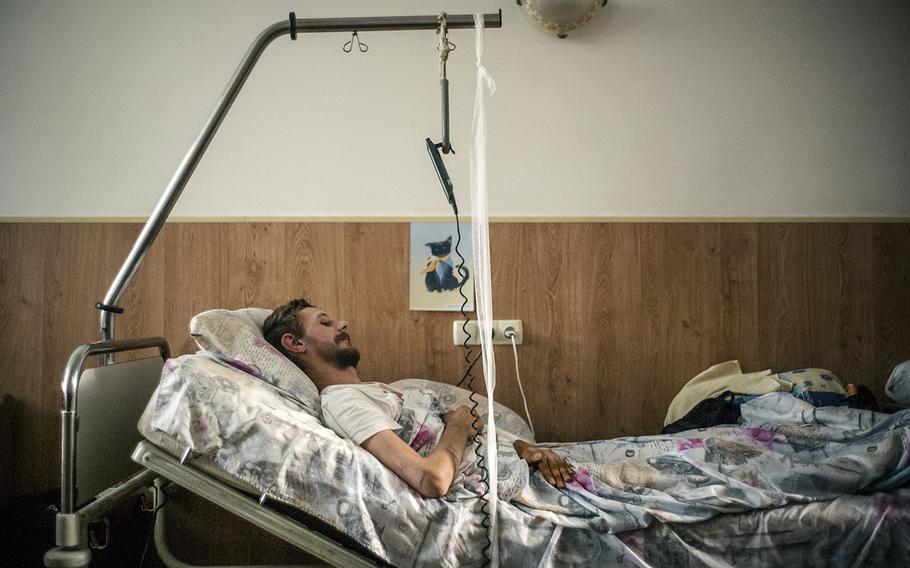 The Ukrainian claims of retaking villages such as Vysokopillya could not be confirmed, though soldiers interviewed said they were able to advance into some previously Russian-controlled villages. Those soldiers declined to name the villages, citing instructions from their superiors.

A group of Washington Post journalists who traveled within three miles of Vysokopillya, in northern Kherson, on Monday were prevented from entering the village by Ukrainian troops and could not ascertain its status. A local official said Ukrainian and Russian forces were still battling for control.

A clear picture of Ukraine's losses could not be independently assessed.

Denys, sitting upright on his hospital bed, said almost every member of his 120-person unit was injured, though only two were killed.

A 25-year-old soldier being treated for shrapnel wounds said that, within his unit of 100 soldiers, seven were killed and 20 injured. Ihor, the platoon commander, said 16 of the 32 men under his command were injured and one was killed.

Ukraine's injured soldiers have been spread out to different hospitals across southern Ukraine to free up the main medical facilities near the Kherson region for incoming patients.

The Post is withholding the names of hospitals treating soldiers because such medical facilities have been targeted by Russian forces through the course of the war.

On Sunday, a hospital in Mykolaiv, a city near Kherson, came under Russian shelling. The facility's pediatric clinic was so badly damaged it was no longer functional.

When it comes to casualties, Rob Lee, a military analyst at the Foreign Policy Research Institute, said Ukraine must make sure it retains a fighting force large enough to fend off Russian advances in the east, given Moscow's far larger armed forces.

"If they're taking heavy casualties and it continues for a long period of time, it can be a problem," Lee said.

Ukraine's reliance on inexperienced soldiers is also a vulnerability but not one that is exclusive to its forces.

At the start of the conflict, Russia and Ukraine fought with professional military units. After suffering heavy losses in the eastern Donbas region, each side began deploying volunteer or reservist units with less experience.

Ukrainian soldiers who faced off with Russians over the last few months gained new battlefield acumen "but much of that experience likely involved holding defensive positions," he said. "Conducting offensive operations is far more difficult, and it takes time and training."

The flurry of action at the hospitals made clear the soldiers weren't in the fight alone. Doctors, nurses and hospital staff worked around-the-clock to provide care for the large influx of wounded troops. One nurse snuck a kitten into the trauma unit for a soldier named Oleh, who rescued the feline from the front lines after its mother was killed by shrapnel.

Volunteers brought toiletries, including toothbrushes and deodorant, and bags of new clothes for the soldiers to wear after physicians used scissors to cut through their shirts and pants to expose their wounds.

Each soldier said it was impossible to predict when Kherson might be liberated, and many said it would depend on when the Ukrainians receive enough artillery from allies.

When one soldier appeared uncertain if the counteroffensive would be worth the toll it has taken, Oleksandr, who has cultivated a reputation as the "hospital comedian," said it was important to maintain a positive attitude.

"You have to make jokes to keep your spirits up. We can have this outlook because we're Ukrainians," he said. "We're kind if you don't touch us."

The Washington Post's Steve Hendrix, in Ukraine's Kherson region, and Isabelle Khurshudyan in Tbilisi, Georgia, contributed to this report.