Runaway chimpanzee returned to Ukrainian zoo on a bike 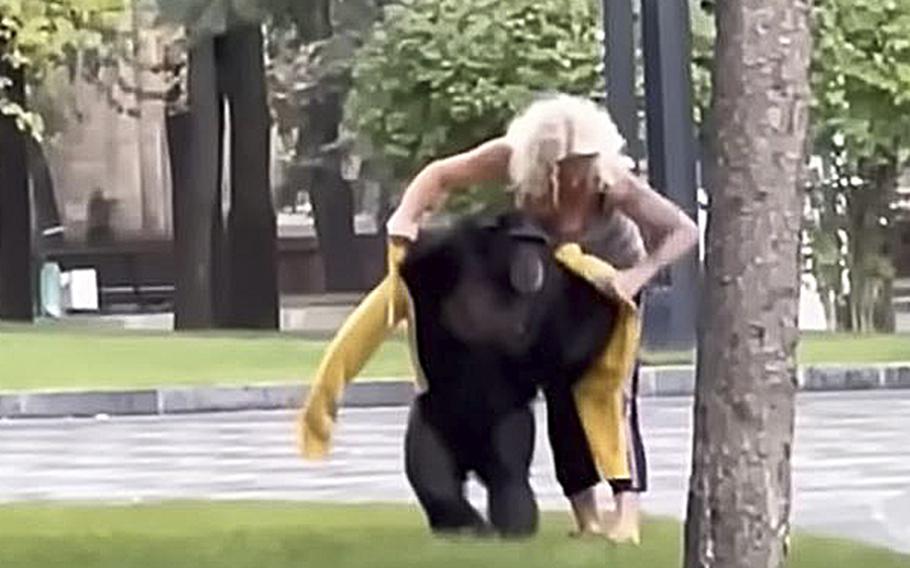 A video screen grab shows Chichi, a chimpanzee that escaped from the Kharkiv zoo in Ukraine, getting help putting on a yellow rain jacket. (YouTube)

A chimpanzee who ran away from a Ukrainian zoo was talked into returning after zookeepers offered her a raincoat, a hug and a bike ride.

Chichi the chimpanzee escaped Monday from Kharkiv's zoo and roamed the streets of the northeastern Ukrainian city for hours. She kept a distance from keepers who were following her, scampering from a university to a nearby city square, local media reported.

At one point, a zookeeper sat down with Chichi near a park in hopes of persuading her to return. The chimp was hesitant - until it started to rain. She then went to a nearby zookeeper, who helped her put on a yellow raincoat and gave her a cuddle.

Chichi was then wheeled back on a zookeeper's bicycle. The zoo's director, Oleksiy Grigoriev, told Ukrainian public broadcaster Suspilne that the chimpanzee was returned safely to its enclosure and is in good health.

Footage of the escape and return was widely shared on social media. It was a heartwarming moment for a city that is just some 50 miles west of the Russian border city of Belgorod and faces regular Kremlin artillery attacks.

Chichi lived at Feldman Ecopark, an outdoor zoo in Kharkiv's northern suburbs that sits just off the front lines of war. She was evacuated alongside hundreds of animals in the weeks after the Russian invasion. Elsewhere in Ukraine, animals have come under heavy stress from the sound of rocket attacks, air raid sirens and gunfire, The Washington Post has reported. Earlier in the war, staffers at Kyiv's zoo moved into their workplace full time with their families to take better care of the animals.

Some 100 animals at Feldman Ecopark were killed in Russian rocket attacks, and others were forced to be euthanized, according to the petting zoo. At least six of the park's employees and volunteers have also been killed - at least one while evacuating animals, the zoo said.

A rocket attack on Tuesday blasted through three levels of a largely vacant apartment building near the city center, regional governor Oleh Synyehubov wrote on Telegram. Three civilians, including an elderly woman, were also killed by separate rocket attacks in the suburbs and nearby villages, he said.