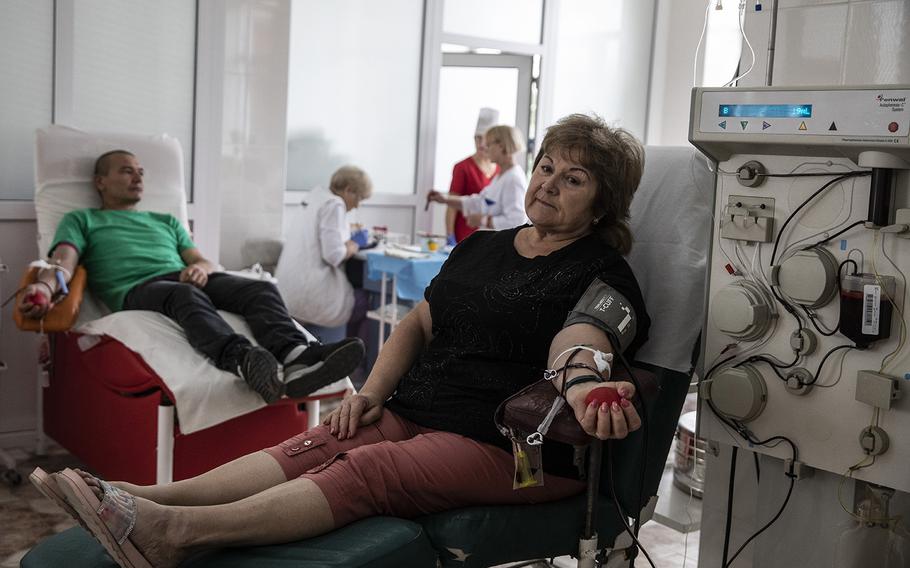 MYKOLAIV, Ukraine — Hundreds of civilians and soldiers lined up Saturday in response to calls for blood donations in this southern front-line city holding off Russian forces.

"They said on TV that there was an urgent need for blood today," said Svitlana Mymokhod, 58, an accountant who began cooking for local army units after the Russian invasion in late February.

When officials pleaded for B-negative donors, Mymokhod's blood type, it led her to donate for the first time in 20 years, she said as she methodically squeezed a rubber ball while crimson tubes led from her arm.

"We need to give more blood to save the soldiers who are fighting for us."

A city of about 500,000 people, this has been a key front since the start of the war, where the Ukrainian military barred Russian forces from advancing west toward the key Black Sea port of Odessa.

Mykolaiv is now the closest Ukrainian city to the Kherson region, where Russia has controlled territory since early in the conflict - and where fighting has ramped up as Ukraine seeks to repel Russian troops.

Kyiv has signaled for weeks that a counteroffensive is looming. In Kherson, residents described in recent days an increase in artillery fire from both sides, with people in the region's Ukrainian footholds fleeing via a makeshift bridge of gravel and pipes or by swimming the Inhulets River.

The army has blocked reporters from front-line areas since the campaign started, leaving Mykolaiv residents to scour Telegram channels and group chats to follow its progress.

"The need is critical right now," said Vladyslav Vekha, 25, a soldier from Mykolaiv who got a day's leave to donate blood.

His city, where the sight of speeding military ambulances was common this past week, is in range of Russian reprisal attacks.

Earlier in the war, a cruise missile launched from a Russian ship in the nearby Black Sea destroyed a government building, killing 37 people.

So far, local officials say, the rate of attacks here has not increased significantly, although a Saturday morning strike damaged a garage and injured one woman.

"I think [the Russians] are too busy dealing with our offensive in Kherson," said Dmytro Pletenchuk of the Mykolaiv regional administration.