Russia buries Gorbachev and his legacy of glasnost 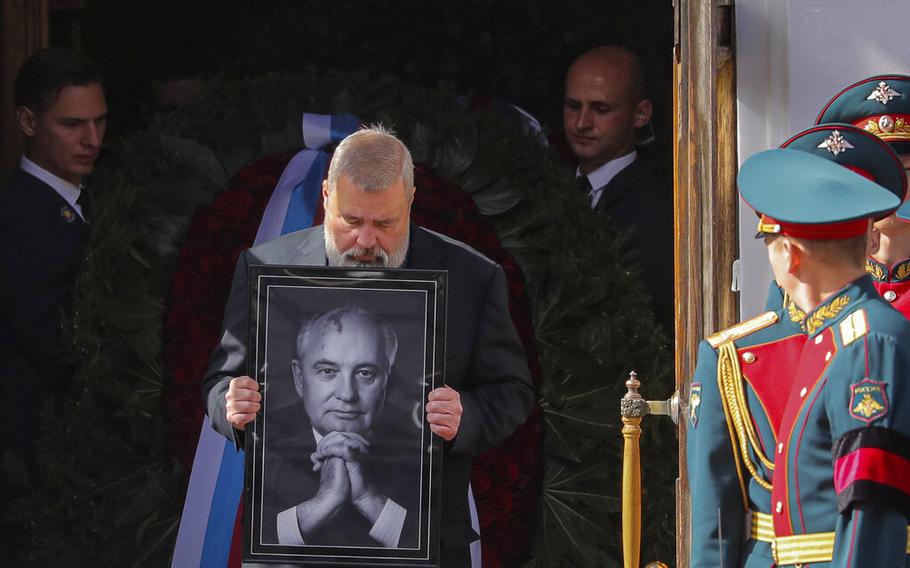 Nobel Peace Prize awarded journalist Dmitry Muratov carries a portrait of the late former Soviet president Mikhail Gorbachev after a farewell ceremony at the Pillar Hall of the House of the Unions in Moscow, Saturday, Sept. 3, 2022. (Maxim Shipenkov/Pool via AP)

Russia on Saturday held funeral rites for Mikhail Gorbachev, the last Soviet leader, laying to rest the man whose policies of openness and economic restructuring - glasnost and perestroika - spurred the dismantling of Communist authoritarianism in Europe but who then watched his legacy unravel as Russia returned to isolationist dictatorship under Vladimir Putin.

Gorbachev, who died this week at 91 at a hospital in Moscow, was eulogized at a public memorial service at the House of Unions in the Russian capital. Thousands of people lined up to pay their respects to the former leader, whose body lay in an open casket with two ushers and two soldiers guarding him on each side in a dimly-lit marbled hall.

Gorbachev was buried at Moscow's Novodevichy Cemetery next to his wife, Raisa, who died in 1999.

Gorbachev is adored in the West for bringing the Cold War to an end but his radical economic reforms made him a controversial, and at times despised, figure at home, and he was denied an official state funeral.

His end echoed that of Nikita Khrushchev - the only other Soviet leader not to be given a state funeral - who was also credited with liberalizing Russia, but ultimately ousted as Community Party premier in 1964 and loathed by his successors.

Putin disdained Gorbachev and has previously called the collapse of the Soviet Union a "catastrophe." While other former Soviet leaders were buried within the Kremlin walls, Khrushchev was buried in Novodevichy, which will also be Gorbachev's final resting place.

Yet for many liberal-minded Russians, Gorbachev remains a beacon of freedom and a distant memory of a chaotic but promising era that put an end to Soviet stagnation.

"I came here to show gratitude for the chance," said Grigory Yavlinsky, the leader of liberal opposition party Yabloko. "No one even asked him for it, he just gave people the opportunity to say what they think. This never happened in Russia before."

"He made controversial decisions and as a historian I know this very well," Ekaterina, a young woman standing in line to pay her respects, told a 360 TV channel correspondent. "But for me it's much more important that he was able to leave in time. He was not afraid to live his life further on."

"With perestroika new life began, new opportunities opened up for us and I was happy," another mourner, Elena, told 360 TV. "I came here to thank him for the life I had."

Putin did not attend, citing his busy schedule. That move was seen as a snub reflecting the Russian leader's disdain for Gorbachev's rapprochement with the West, his political and economic reforms, support for free speech and government transparency and, most of all, for the dissolution of the Soviet Union.

The Kremlin said Gorbachev's ceremony would still have "elements" of a state funeral, and that the state was helping to organize it. This included an honor guard of two soldiers in gold-trimmed dress uniforms who took up a ceremonial post flanking the coffin.

On Thursday, Putin paid a muted tribute to Gorbachev by visiting the hospital where the politician's body remained after his death. In a clip broadcast by government television channels, Putin could be seen leaving a bouquet of red roses by the coffin, bowing and then departing the mourning hall of the Central Clinical Hospital without uttering a word. 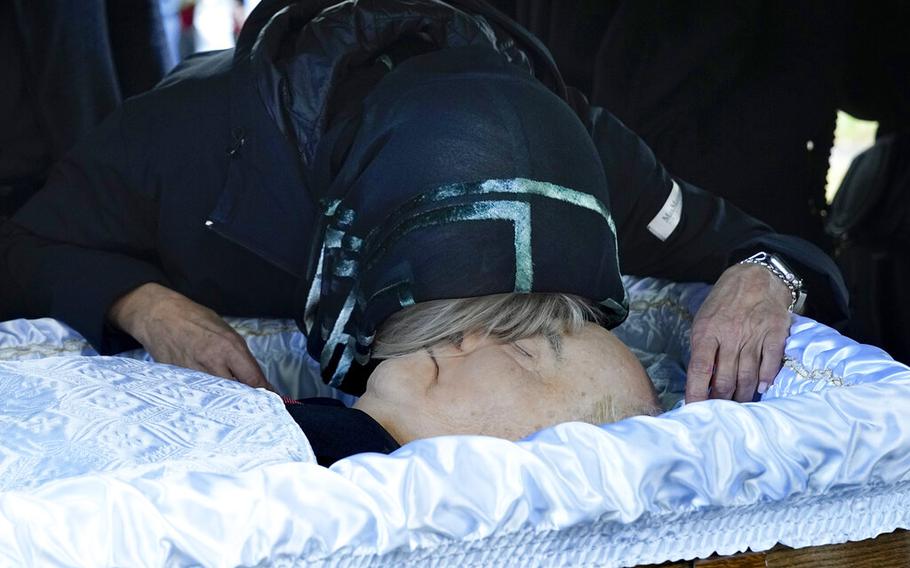 Saturday's memorial ceremony took place in the Pillar Hall of the old Soviet House of Unions, which was also the site of memorials for Vladimir Lenin, Joseph Stalin and Leonid Brezhnev.

Gorbachev's farewell is in stark contrast to the burial of Boris Yeltsin, the first president of Russia and the only other national leader who died during Putin's presidency. Yeltsin, who handpicked Putin as his successor, was honored with a televised farewell ceremony held at the central Moscow Cathedral of Christ the Savior when he died in 2007.

Putin declared the day of Yeltsin's funeral to be a day of national mourning. But Putin has often criticized Gorbachev's legacy, albeit while avoiding personal attacks, and famously described the collapse of the Soviet Union as the "greatest geopolitical catastrophe of the century."

Unlike Yeltsin's funeral, which was attended by dozens of heads of state and other foreign dignitaries, including former U.S. presidents Bill Clinton and George W. Bush, Gorbachev's ceremony was attended by relatively few such guests given the severe tensions over ongoing war in Ukraine.

Hungarian Prime Minister Viktor Orban, who has maintained close relations with Russia during the war, flew to Moscow for the funeral and was seen in Pillar Hall. Hungary, which is a member of NATO, has refused to let NATO allies use its territory to transport weapons being sent to the Ukrainian military.

U.S. Ambassador to Russia John Sullivan attended the funeral, and Russian media reported that ambassadors from Britain. France, Germany and Spain were also in attendance.

President Joe Biden, along hundreds of other officials from countries Russia now deems "unfriendly," have been barred from entering the country.

Gorbachev, who generally avoided any direct personal criticism of Putin, was reportedly distraught over the current Russian president's decision to invade Ukraine.

Pavel Palazhchenko, an aide and interpreter who worked alongside Gorbachev for nearly four decades, said that in one of their last phone conversations Gorbachev seemed "shocked and bewildered" by the state of the country he once ruled.

"It's not just the [military] operation that started on Feb. 24, but the entire evolution of relations between Russia and Ukraine over the past years that was really, really a big blow to him," Palazhchenko told Reuters in an interview. "It really crushed him emotionally and psychologically."