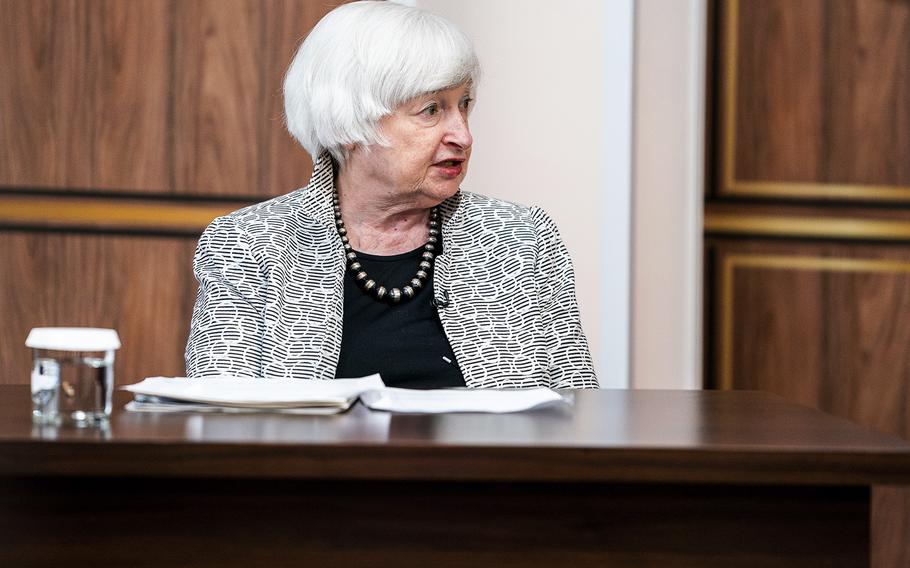 Treasury Secretary Janet Yellen attends a meeting in July, 2022. Yellen has pushed U.S. allies to set a cap on the price they’ll pay for Russian oil in an attempt to cut off profits Russia is using to pay for its war in Ukraine. (Demetrius Freeman/Washington Post)

The leaders of the Group of Seven industrialized nations announced on Friday that they will implement a new price cap on Russian oil, aiming to undercut the Kremlin's finances while keeping energy flowing to the West.

Western allies led by Treasury Secretary Janet Yellen have for months been trying to rally the world behind a plan to purchase Russian oil at a set lower price to stop the huge energy profits Russia is using to finance its war in Ukraine. They have settled on a price cap that is intended to undercut those profits while also ensuring Russia continues to provide oil to world markets, trying to prevent price shocks that could cripple the global economy.

The G-7 had previously only agreed to explore the price cap proposal, but its declaration Friday represented its most significant statement to date that the nations will seek to enact the aggressive new policy, which would be an unprecedented, internationally coordinated action on energy prices.

Top Russian leaders have repeatedly warned that they will retaliate against the price cap.

"Today's action will help deliver a major blow for Russian finances and will both hinder Russia's ability to fight its unprovoked war in Ukraine and hasten the deterioration of the Russian economy," Yellen said in a statement on Friday. "We have already begun to see the impact of the price cap through Russia's hurried attempts to negotiate bilateral oil trades at massive discounts."

The G-7 governments, composed of the U.S. and other Western allies, said in a statement that they plan to enact the price cap by cutting off insurance for all shipments of Russian oil that are sold above a certain price - which would effectively make it impossible to ship. That price has not yet been announced. The new price cap is expected to go into effect by the end of the year.

Yellen has pushed the policy for months with her international counterparts but faced skepticism and difficult questions about exactly how the price cap will work. Analysts have raised concerns that the price cap could be circumvented if countries outside the G-7 - such as China and India - continue to buy Russian oil at a higher price, and then sell it back to world markets at a premium. Other analysts and foreign leaders have expressed concerns that Russia could retaliate by limiting even more its shipments of natural gas to Europe, which already faces a winter in which Germany and other nations will see critical shortages of energy supplies.

Despite the recent decline in energy prices, Russia has continued to reap hundreds of billions in profits from its sales of oil and natural gas. Those energy sales have dramatically undercut the West's sanctions campaign over the war in Ukraine, stabilizing the Kremlin's finances and giving it the means to continue the invasion.

Energy analysts said Friday's announcement does little to clear up how the cap will affect international gas and oil prices, noting that critical details - such as the amount of the price cap and the date it will go into effect - haven't yet been announced.

"The devil is in the details, and few details appeared today," said Bob McNally, a former energy official in the George W. Bush administration now at the Rapidan Energy Group. "This was a process announcement, moving from exploring a price cap to implementing one."

To implement the cap, the G-7 will have to get European Union member states to amend the bloc's sixth round of sanctions. In June, after weeks of tense negotiation, the E.U. agreed to ban imports of oil from Russia and prohibited insuring and financing the maritime transport of Russian oil to third countries. The United States banned Russian oil imports in March.

The oil cap news comes as the E.U. considers emergency measures to tackle soaring energy prices and prepares for what many fear will be a long, cold winter. E.U. energy ministers will meet in Brussels on Sept. 9 to discuss calls to overhaul the bloc's power market.

Concerned about the potential for soaring prices, U.S. officials have pushed hard for the cap but faced resistance in Brussels, where some E.U. diplomats have maintained that the cap needs much broader support, particularly from China and India, to be effective.

Dmitry Peskov, a spokesman for Russian President Vladimir Putin, warned Friday that countries who participate in the price cap will not receive Russian oil. Peskov said of the Western allies: "We simply will not cooperate with them on oil on such non-market principles."

Ariel Cohen, a senior fellow at the Atlantic Council, said that he remains concerned that Putin will respond to the price cap by cutting Europe off from natural gas shipments, which could exacerbate the continent's economic crisis.

"We have to be careful in not causing an economic slump in Europe," Cohen said. "I want to understand clearly where the alternative gas supply will come from. What is the extent of the economic pain Europe can take?"

But Simon Johnson, an MIT professor who specializes in energy policy, emphasized that the price cap plan - which would still allow Russia to trade oil at a discount - would be less disruptive to world markets than Europe's prior plan to simply cut off all Russian oil.

"It demonstrates that they want oil to flow, which will keep oil prices lower than they would be otherwise," Johnson said.