At edge of Russian onslaught, city of Bakhmut clings to freedom 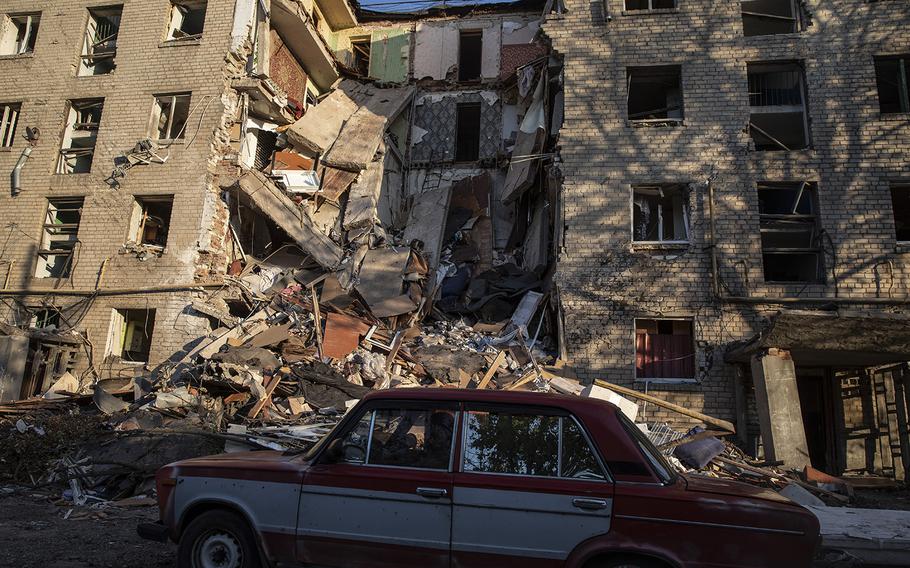 A resident arrives at a badly damaged building after it was hit by a Russian rocket strike in Bakhmut. (Heidi Levine for The Washington Post)

BAKHMUT, Ukraine — For the last few civilians hanging on in this front line city being pounded by advancing Russian artillery, a gaping new crater is both a mark of war and source of water. On Monday, within hours of the rocket strike that made the hole, residents were climbing down to fill bottles at the silty trickle from a shattered water main.

"This one doesn't have a handle," said one muddy man, handing a bottle up to a friend. "Put it in a bag to carry."

In what could be its final weeks of freedom before it is engulfed by Moscow's slowly advancing tide of occupation - Russian units are less than four miles from the city's central plaza - Bakhmut is clinging to the last shreds of bearable life.

Living in deserted apartment buildings without water or reliable power, those who remain scrape what normality they can from donated food, two partially functioning food shops, and the wood and water they can gather in what was a bustling city just six months ago.

Mostly, they do without.

"I tried to buy eggs, but with no electricity, they had no eggs," said Nadezda Andreevna, after she had joined the line outside the Simya grocery store.

Taking Bakhmut would put Russian troops a big step closer to the major regional hub of Kramatorsk, where the frequency of incoming artillery fire has also increased in recent weeks. Taking any of the cities would be a boost to Russia's grinding goal of controlling the huge industrial swath of eastern Ukraine known as Donbas, where Russian President Vladimir Putin formally recognized two self-declared breakaway republics that the Kremlin has backed since 2014.

More than 80% of Bakhmut's population of 71,000 has fled since the invasion, according to city officials. Those left waiting in this summer warscape of blooming roses and shattered buildings say they have no choice. Many of them are elderly and say they have no family elsewhere in Ukraine and no money to leave. 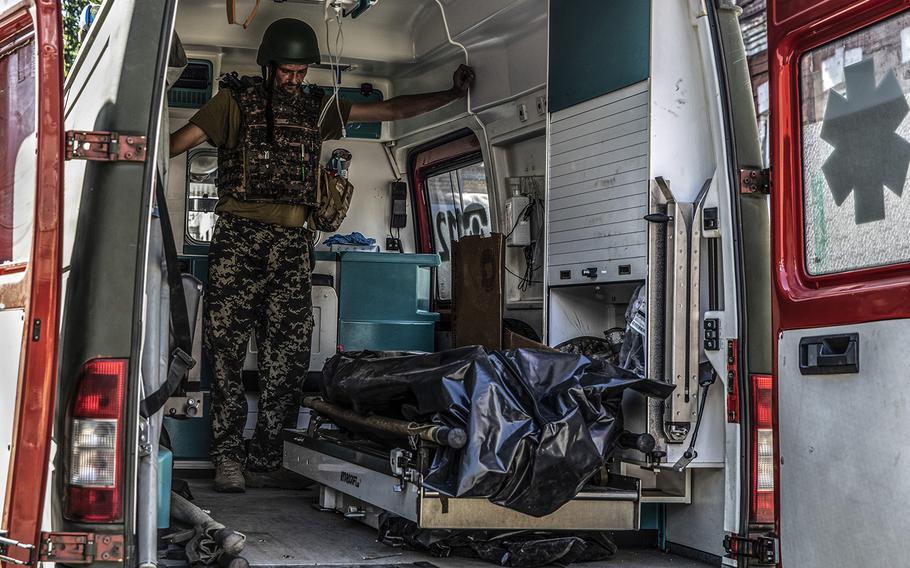 A medic stands in an ambulance that has arrived in Bakhmut with the body of a 25-year-old Ukrainian soldier killed by Russian forces. (Heidi Levine for The Washington Post)

The morning after a rocket blew the glass from her living room window and pocked the front of her Soviet-era apartment house with shrapnel, Maria Tiutiunnykova's response was not to pack her bags, but to clean the sidewalk. The 81-year-old, whose daughter was killed in the fighting with Russian-backed separatists in the region several years ago, said her pension is too small and her skills too meager to make it anywhere else.

"No one wants us," she said, sweeping shards into neat piles on the cracked pavement.

At least some stay in this region of historically divided loyalties because they don't regret the enemy's slow approach.

"They won't say it to us, but there are people who will cheer the Russians," said one Ukrainian soldier who has been stationed in the area since July.

Many of those still here are in denial of the conventional military wisdom: that the slow but inexorable crawl of Russian forces across the Donetsk region that overwhelmed the nearby cities of Severodonetsk and Lysychansk is likely to consume Bakhmut next.

"Our soldiers will protect us" is a refrain repeated by those who have watched Ukraine's army, beyond all expectations, push the Russian invaders back from Kyiv and this week mount an offensive to take back the southern city of Kherson.

Bakhmut has been scarred by war for eight years, ever since Russian-backed separatists began a push to conquer the Donetsk region.

In 2016, as part of a wave of anti-Communist, anti-Russian sentiment, residents ditched the Soviet-era name of their city, Artemivsk, which had been adopted in 1924, and restored the historical name of Bakhmut, which dates to 1571 when it was a Cossack settlement.

Now, the city's last remaining inhabitants are fatalistic about the future. "We will decide whether to leave when the Russians come," said Andreevna, the shopper, as she carried her two loaves of bread and two liters of water back to her apartment. "If they come."

As that front line inches nearer to Bakhmut, jobs and commerce have evaporated in an area of coal and salt mines that was one of Europe's biggest salt producers. Some farmers sell flowers and grapes in the central plaza, but other retail is largely limited to a few tobacco kiosks and this darkened grocery. 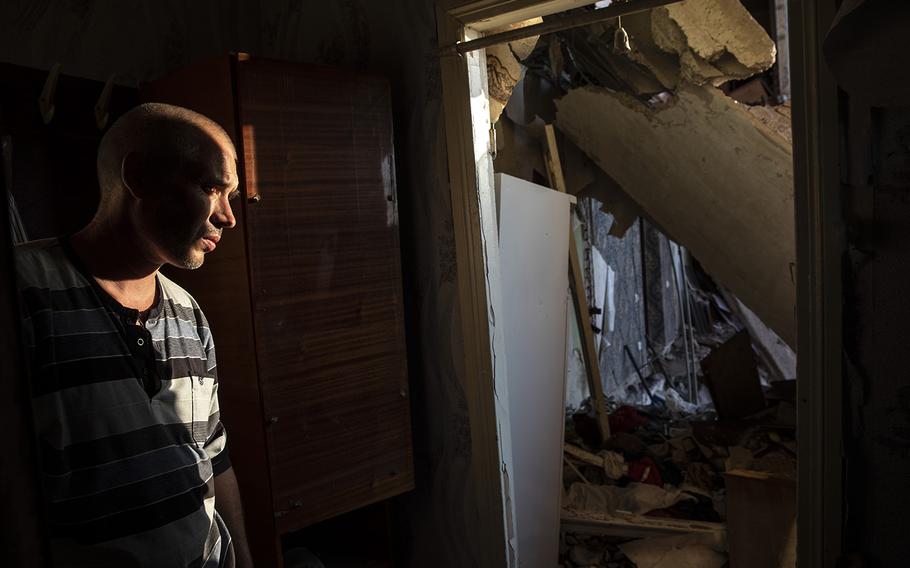 A resident surveys his damaged apartment in Bakhmut after it was hit by a Russian rocket. (Heidi Levine for The Washington Post)

Customers are not allowed in among the gloomy, empty aisles of the store, which recently had its rear windows blown out by a mortar round. Instead, they hand their lists to a clerk at the front door.

Humanitarian aid - water, rice, canned goods - still makes it into the city, carried in several times a week by volunteers. What residents come to buy here are the more-specialized goods that enliven the Ukrainian diet.

"Do you have kvass?" said a man with two jugs of water tied to his bicycle, asking for the popular low-alcohol beverage made from fermented bread.

"I wish we could have more fresh produce," said Oksana Budylina, the manager. "But we haven't had electricity for three days."

It is not Budylina's store - the owners fled for central Ukraine soon after the invasion - but she feels a mission to stick with Bakhmut until the end. Without her goods, the remaining people here would be dependent on handouts that can be uncertain and limited.

"People want meat on their table still," said Budylina, who was wearing a "Life is Better in Pajamas" T-shirt. She tries to keep the shop open for nine hours a day. "Even if the Russians come, we will work," she said.

Most of what busyness remains in the city comes from its pop-up role as an emergency room for soldiers wounded in the surrounding front-line areas.

Military ambulances regularly race down the quiet streets, avoiding shell craters, roadblocks, and the dogs and cats left behind by residents who fled.

Bakhmut sits at the center of a web of army medic stations tucked into bunkers, abandoned buildings and trenches around the region. When the command centers get a radio call about casualties - officials refuse to discuss specific numbers but acknowledged that crews are responding to "hundreds" of evacuation calls a day - these medics go to the battlefield, pick up the wounded and race to Bakhmut.

"Sometimes we don't even have enough stretchers to carry them all," said Volodymyr Pigulevskiy, 37, one of the military surgeons on duty.

Often, the drivers are too late. The military van was not rushing when it pulled up to a nondescript building in the city Monday, letting out soldiers who unzipped a body bag so medical personal could see the remains of a 25-year-old soldier who was shot in the chest.

There is no morgue in Bakhmut. The soldiers set the body bag and its stretcher on the sidewalk to wait for transport west. A stray German shepherd settled next to it.

Bakhmut has become a window onto the war's grisliest side.

Pigulevskiy has treated Russian soldiers - "None of them showed any remorse," he said - along with Bakhmut civilians and Ukrainian enlistees ranging in age from 19 to 61.

"We have a lot less time to treat a lot more people," said Pigulevskiy, whose sandals and Gucci T-shirt gave him the look of the civilian surgeon he was before war called him to duty in a city where explosions are routine. He and his colleagues have all been close to strikes in Bakhmut, at risk of becoming victims like those they treat.

"The shells don't decide where they land," he said, heading to the next emergency. "Here, they just hit."