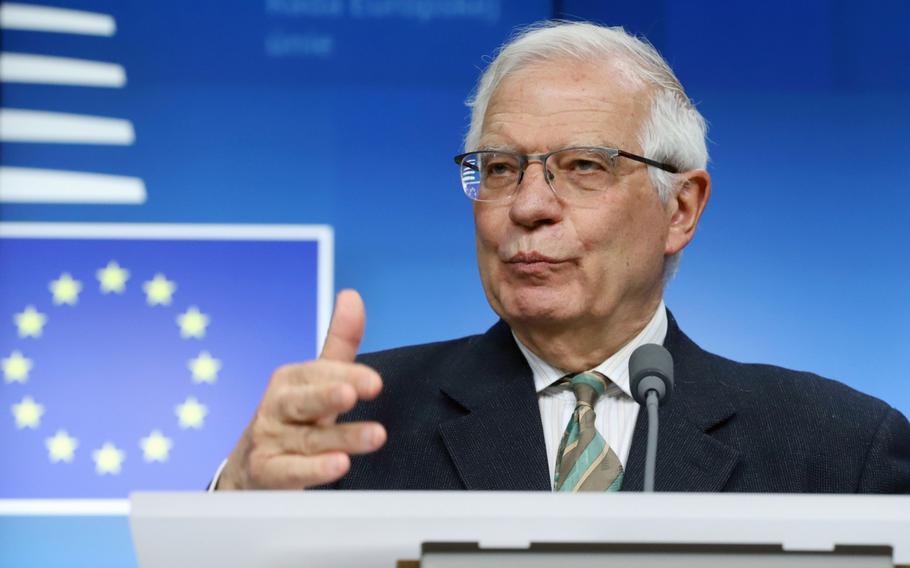 Josep Borrell, vice president of the European Commission, speaks during a news conference following a Foreign Affairs Council and Defense Ministers meeting at the E.U. Council headquarters in Brussels on March 21. (Valeria Mongelli/Bloomberg)

European Union member states agreed to make it costlier and more difficult for Russian tourists to travel to the bloc, but stopped short of a full visa ban.

The bloc's foreign ministers gave their political backing to suspending a 2007 deal that facilitated the issuing of visas to Russians, Josep Borrell, the E.U.'s foreign policy chief, told reporters after a meeting in Prague. "This will significantly reduce the number of new visas issued by member states," he said.

An increasing number of border crossings from Russia since mid-July "has become a security risk," Borrell said. Many Russians were traveling to the E.U. for shopping "as if no war was raging in Ukraine," he said, adding that member states "considered it cannot be business as usual."

The foreign ministers had met amid divisions on banning Russian tourists in response to Russia's invasion of Ukraine. The Baltic countries and Poland threatened unilateral action if the E.U. failed to agree to ban Russian tourists, but other envoys including from Germany and France pushed for more caution.

During Wednesday's talks, Czech Foreign Minister Jan Lipavsky urged his counterparts in the room to stop issuing tourists visas and also ban tourists that are already holding an E.U. visa, according to a person familiar with the matter. Lipavsky suggested that further steps to limit tourist traffic from Russia could be included in a new sanctions package.

Several ministers met for separate talks earlier Wednesday to work out the wording for a compromise agreement, officials said. Ministers sought common ground to avoid the optics of an east-west split.

Baltic states have been pushing for a visa ban amid an influx of Russian tourists crossing into the E.U. via their borders. Poland, Estonia, Lithuania and Latvia said in a joint statement ahead of the meeting that they are considering introducing "national-level temporary measures" to limit the number of Russian citizens entering the bloc and Schengen area across their borders.

Borrell said that E.U. countries have a wide range of measures they can take concerning Russian visa issuance and border controls, as long as they conform with Schengen area rules.

German Foreign Minister Annalena Baerbock cautioned against an overly restrictive visa policy before Wednesday's meeting, saying it was important to target Russian officials and those profiting from war, but to continue allowing others who might not support the regime to travel to Europe. A discussion paper Germany drafted with France and circulated to member states warned against far-reaching travel restrictions that could feed the Russian narrative.

Kremlin spokesman Dmitry Peskov said on Tuesday that if the E.U. went ahead with a ban on tourist visas for Russians, "this couldn't be left without a response" by Russia, without elaborating on possible retaliatory moves. Peskov called proposed measures a "collection of irrationalities bordering on madness."

With flights banned to and from the E.U., Russians have mostly had to enter the bloc by land, primarily through Finland and the Baltic countries.

Around one million Russian citizens have legally entered the E.U. since Russia invaded Ukraine on Feb. 24, with roughly two-thirds entering through the borders of Estonia or Finland, according to the E.U.'s border agency Frontex. Once they cross into the E.U. with a Schengen visa, they are free to travel around the border-free zone within Europe.