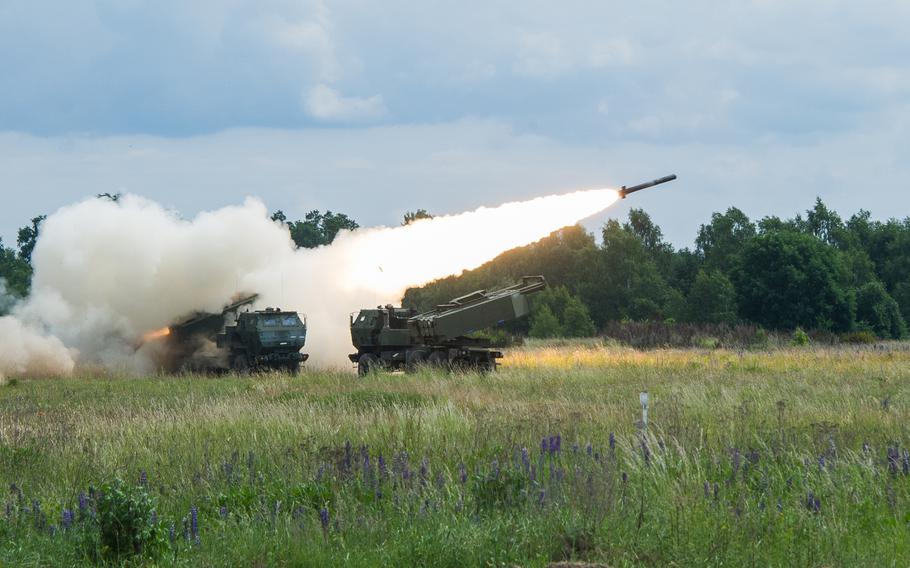 High Mobility Artillery Rocket System (HIMARS) vehicles executing a fire mission in Poland, June 16, 2017. The United States began in June to supply Ukraine with HIMARS, which can launch multiple rockets with precision at Russian military targets from nearly 50 miles away. Russian cargo planes have quietly picked up the first of scores of Iranian-made combat drones for use against Ukraine. (Markus Rauchenberger/U.S. Army)

Russian cargo planes have quietly picked up the first of scores of Iranian-made combat drones for use against Ukraine, U.S. officials said, in a move that underscores deepening ties between Moscow and Tehran while also highlighting Russia's struggles to supply its overstretched military.

Transport planes departed Iran on Aug. 19 hauling at least two types of unmanned aerial vehicles, both capable of carrying munitions for attacks on radars, artillery and other military targets, according to intelligence gathered by U.S. and other spy agencies.

But while the weapons could provide a significant boost for Russia's war effort against Ukraine, the transfer has been marred by technical problems, security officials from the United States and an allied government said in interviews. In early tests by the Russians, the Iranian drones experienced numerous failures, the officials said.

"There are a few bugs in the system," said an allied security official whose government closely monitored the transfer. The official agreed to discuss sensitive intelligence on the condition that his identity and nationality not be revealed. "The Russians are not satisfied," the official said.

The initial delivery of the Mohajer-6 and Shahed-series drones to Moscow is believed to be the first installment of a planned transfer of hundreds of Iranian UAVs of various types, Biden administration officials said, also speaking on the condition of anonymity because of the matter's sensitivity.

The Iranian drones could help fill a crucial gap in Russia's military campaign in Ukraine. Russia, which has 1,500 to 2,000 military surveillance UAVs, has relatively few attack drones of the type that can deliver precision strikes against targets deep inside enemy territory. Ukraine, by contrast, has used Turkish-made combat UAVs to wreak havoc on Russian armor, trucks and artillery since the early weeks of the conflict.

The Biden administration warned in July that Russia was preparing to acquire large numbers of Iranian drones to conduct air-to-surface attacks, electronic warfare and targeting on the battlefield in Ukraine.

Washington Post columnist David Ignatius reported last week that Iran had begun delivering the drones. But details of the transfer, including the types of UAVs provided and their purportedly lackluster performance so far, have not been previously reported.

In interviews, the U.S. and allied security officials said Russian planes flew to an Iranian military facility to pick up the drones over several days in mid-August. The allied security official said the initial shipment included two models of Shahed drones, the Shahed-129 and Shahed-191, as well as the Mohajer-6. All are considered to be among Iran's top-of-the-line military drones, designed for attacks as well as surveillance.

The deal was negotiated over several months by a team led by Brig. Gen. Seyed Hojjatollah Qureishi, the chief of the supply and logistics division of Iran's Defense Ministry, and Russia's military attache in Tehran, the security official said. Under the arrangement, Iranian technical experts traveled to Russia to help set up the systems, and Russian military officers underwent training in Iran, the official said.

While Iran has supplied military drones to armed proxy groups such as Yemen's Houthi rebels, it has rarely, if ever, tested such models against the kinds of sophisticated electronic jamming and antiaircraft systems used in Ukraine, said Michael Knights, a military and security expert with the Washington Institute for Near East Policy.

Iran has demonstrated an ability to launch "swarm" drone attacks — involving multiple suicide drones massed against a single target — and Western governments will be watching closely to see whether Iran's UAVs can carry out such operations on an intensely contested battlefield, Knights said.

"These Iranian drones have not operated in a sophisticated air-defense environment before," Knights said. "The closest they've come to that is with [Houthi strikes against] Saudi Arabia or against U.S. bases in Iraq, and they have generally not done well. So I wouldn't be surprised that, in a more intense environment like Ukraine, that they would have some problems."

For Russia, the Ukraine conflict has exposed the country's failure to develop a line of combat drones similar to ones used by the United States for two decades, experts say. "They understand that they needed those drones yesterday in large quantities," said Sam Bendett, a Russian-military analyst at the Virginia-based research group CNA.

And Russia has really only two countries to which it can turn to "plug the capability gap" in combat drones: China and Iran. But China is deeply enmeshed in the global supply chain and does not want to supply combat UAVs because that would probably invite U.S. sanctions, he said.

That leaves Iran, which is not exposed in the same way and whose capability is homegrown, "which is what the Russians are going for," Bendett said. "Iran is also a Russian ally. So it's the only real choice left. Iran represents a very interesting case of having a domestic industry that grew up amid sanctions. And it represents a fairly robust capability."

The United States began in June to supply Ukraine with the High Mobility Artillery Rocket System, commonly known as HIMARS, which can launch multiple rockets with precision at Russian military targets from nearly 50 miles away. The use of HIMARS has enabled Ukraine to destroy Russian ammunition depots and logistics supplies far behind the front lines.

"The Russians have no way to limit the damage HIMARS are inflicting on them now," said Dmitri Alperovitch, chairman of Silverado Policy Accelerator, a Washington-based think tank. "They hope attack drones can help."

Other NATO-provided long-range artillery, such as M777 howitzers capable of launching precision-guided rounds, also has added to Russia's challenge, said Rob A. Lee, a Russia military expert and a senior fellow with the Foreign Policy Research Institute.

"One of Russia's biggest problems right now is its air force can't interdict things behind Ukrainian lines," Lee said. "They don't have many long-range UAVs that can strike targets behind enemy lines. So they can't prevent Ukraine from reinforcing its positions and restocking supplies . . . And a lot of their UAVs are getting shot down or lost to electronic warfare."

While Russia is apparently seeking to ramp up domestic production of such drones, it is hampered by Western sanctions and export controls, which have stanched the flow of semiconductor chips essential to producing such weapons, analysts said.

"They're relying on the black market, but the needs are vast," Alperovitch said. "You need chips for everything from precision-guided missiles to aircraft to tanks, not to mention nonmilitary items in their own domestic industries. So there's lots of demand in Russia for chips, and if Russia can procure fully made drones from Iran, it doesn't need to use its precious supply of black market chips to make its own drones."

Analysts said the transfer of drones is unlikely to affect the ongoing nuclear talks between Iran and world powers, which are proceeding on a separate track and aimed a different objective: eliminating Iran's capacity for quickly making a nuclear bomb. But the further cementing of military ties between Iran and Russia is a worrisome development for the United States and its allies, experts said.

"The ever-closer alliance does give Russia some military procurement depth, which will be welcome in Moscow," said Clifford Kupchan, chairman of the Eurasia Group. "The bigger message - which may be lost on [Russian President Vladimir] Putin for now - is that one of the world's allegedly leading militaries is having to turn to Iran for help with key technologies, which shows just how drained their inventory is."