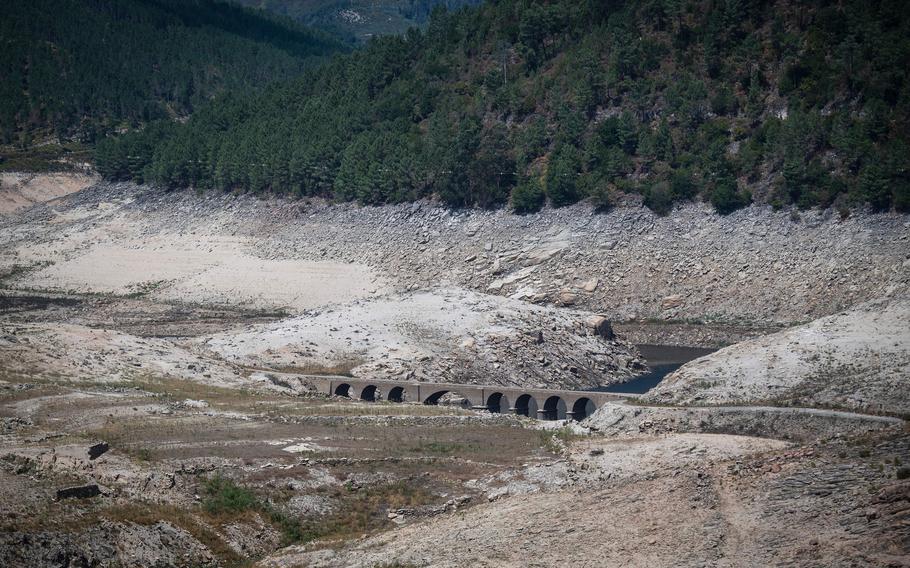 The normally submerged bridge of the one-time village of Aceredo is seen after emerging due to the low water level of the Lindoso reservoir, near Lobios, Spain, on Aug. 25, 2022. (Miguel Riopa/AFP/Getty Images)

Ancient Romans began construction on a military camp in what is now northwestern Spain, along the Lima River in Galicia, in about 75 AD, Spanish researchers wrote in a 2018 study. They abandoned the camp about a century later.

The remaining ruins became submerged after the construction of a dam in 1949 created the As Conchas reservoir, The Guardian reported.

But this summer, all droughts led to Rome.

Aerial photographs show a sprawling collection of neatly organized stone structures primarily made of gray-brown cobblestones. What’s left of a wall runs around the smaller structures, water lapping at its edge. A once-grand entrance stands partially collapsed, almost welcoming the river that lies just beyond its doorway.

This is Aquis Querquennis, called “A Cida” or “the city” by locals, Ondacero, a local outlet, reports.

Centuries later, all of Aquis Querquennis had been thrown under water. The full complex emerged as water levels in the As Conchas reservoir fell to 49% capacity, Faro de Vigo reported in early August.

Spain – like much of Europe – has struggled under above-average temperatures and below-average rainfall, causing a heat wave and drought, BBC reported. Almost two-thirds of Europe is under drought warning or alert conditions, according to the European Drought Observatory.

The region’s current drought, amplified by human-induced climate change, appears to be the worst one in at least 500 years, CNBC reported, citing meteorologists.

As a result, “nearly all of Europe’s rivers have dried up to some extent,” BBC reported on Aug. 24, citing an EU report. Pieces of history – “hunger stones,” World War II shipwrecks and “megalithic monuments” – have surfaced in these drying waterways.

Aquis Querquennis is about 300 miles northwest of Madrid, near the Spain-Portugal border.