Here's how Europe is slashing energy use 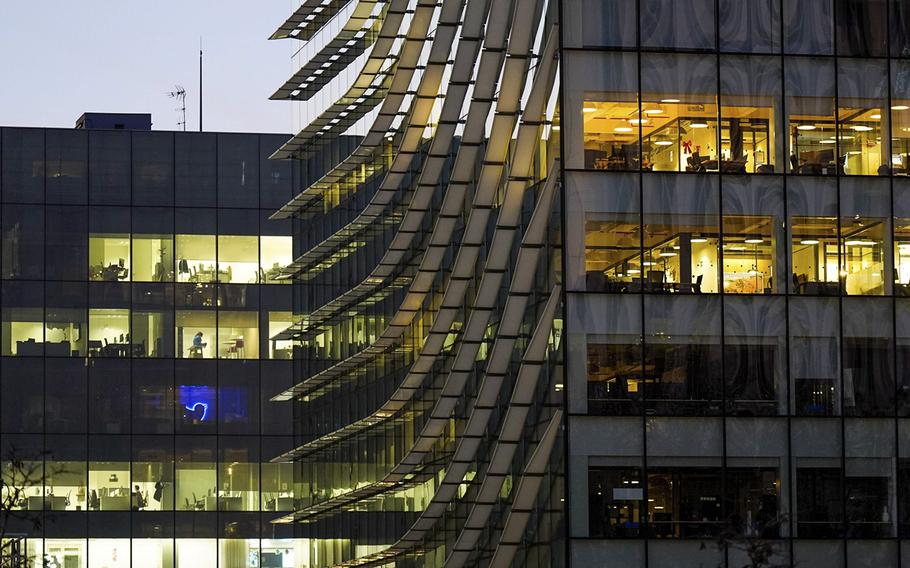 Empty offices in the financial district of Madrid on Jan. 3, 2022. (Angel Navarrete/Bloomberg )

Europeans are taking colder showers, offices are turning down thermostats and stores are dimming lights to avoid blackouts and freezing homes this winter in the fallout from Russia's war in Ukraine.

As the Kremlin slashes gas deliveries and power-plant outages intensify a supply squeeze, Europe has little alternative but to curtail demand. Measures so far have been uneven, but the urgency is growing as wholesale prices continue to surge.

While some countries like Germany, where nearly half the homes rely on gas for heating, are more exposed than others, the European Union is seeking to band together. The bloc's member states aim to cut gas use by 15% through this winter if Russia - which historically covered about 40% of EU demand for the fuel - turns off the tap.

Here's an overview of some of the key initiatives to curb energy usage:

Chancellor Olaf Scholz's cabinet approved a raft of measures this week to help cut gas consumption by a fifth this fall and winter. The national measures, which add to steps taken by municipalities across Germany such as cutting off warm water in public pools, are aimed at reducing gas use by about 2% and include:

- No longer heating some areas in public buildings;

- Banning most outside lighting for buildings and monuments; and

President Emmanuel Macron has set a target to reduce energy consumption in 2024 by 10% compared with 2019's level. His administration last month set up a series of working groups focused on government operations, real estate, tech and telecoms, and shopping centers and other public sites. The goal is to have specific proposals by the end of September. While there's been few concrete steps so far, there have been a smattering of initiatives:

- By October, French supermarket chains will turn off illuminated store signs after closing, and retail spaces will reduce lighting by 30% and lower temperatures to 17°C during peak shopping hours, if there's government guidance to do so.

- To set an example, the country's Finance Ministry said it would only turn on the heat when office temperatures fall below 19°C and won't cool unless it gets hotter than 26°C.

A fresh plan to reduce Italy's consumption could be approved at a cabinet meeting as early as next week. Energy prices have become a key issue of the campaign ahead of the snap Sept. 25 election to replace Prime Minister Mario Draghi. The center-left is proposing price controls for electricity, a move criticized by right-wing frontrunner Giorgia Meloni, who instead wants an EU-wide initiative.

According to Italian media, the country's savings plan could include:

- Lowering temperatures and shortening heating hours in homes and offices during winter to cut gas used for heating by more than 10%;

- Reducing public and shop lighting at night and

- Extend the life of coal plants to reduce gas used for power generation.

- Factories halts may be part of the plan, but several energy-intensive industries are already curtailing operations because of spiraling costs In a rare step to legally mandate lower consumption, Spanish lawmakers on Thursday passed rules put in place by decree in early August. The steps include:

- Limiting air conditioning to 27°C in public buildings and most businesses, as well as in airports and train stations;

- Banning lighting of monuments and shop windows at night; and

- Requiring shop doors to be closed whenever heating or cooling systems are on.

In line with the EU target, Switzerland will ask, but not compel, households and businesses to cut gas use by 15% from October to March by taking steps like lowering indoor heating temperatures. The government is setting the same target for its own administration to set a "good example."

If the voluntary approach doesn't work, the government is consulting on compulsory measures including forcing gas-burning industrial plants to switch to oil and supply reductions for the public sector. For now, Switzerland is saying private households will be exempt from any compulsory rationing.

Prime Minister Sanna Marin's government announced a campaign challenging consumers and households, as well as companies and organizations to reduce consumption, targeting 75% of its citizens to take part. The joint campaign by the Economy Ministry and other organizations was announced Thursday and has a long-term goal to permanently lower energy use. The campaign will formally kick off in October and proposes:

- Increasing the use of public transport, and for motorists driving at slower speeds

Prime Minister Magdalena Andersson's government hopes to use about $5.8 billion in so-called bottleneck revenue to compensate households and companies, and the Swedish Energy Agency has presented various tips to help cut energy use in domestic homes, including:

- Insulating attics and facades, with the government offering a tax rebate for associated labor costs;

- Sealing, renovating or replacing windows and exterior doors; and

Prime Minister Mette Frederiksen's administration hasn't set concrete reduction targets beyond the EU goal of 15% cut in gas use, which it has already reached. Authorities have given a number of recommendations for Danes to follow including:

- Shutting down heating systems over the summer;

- Cutting daily hot showers to five minutes from 15 minutes, saving an average household about $700 a year;

- Using a clothesline instead of a tumble dryer to save households about $350 annually; and

The Dutch government isn't implementing measures specifically for this winter, and the state-owned gas company has said the country will have enough supplies for this winter. But the "Save Energy Now!" campaign encourages people to make their homes more efficient by using heat pumps, ventilation with a heat-recovery function, solar water heating and better insulation for roofs, floors and windows.

Vienna has pledged to save some costs by delaying the start of winter lighting for Christmas markets, while ski centers may also reduce offerings by blasting less artificial snow and limiting night-time operations. The national government has yet to impose mandatory measures with the country on track to fill one of the continent's largest gas storage networks to 80% of capacity.

Prime Minister Kyriakos Mitsotakis's government announced measures in June to curb public-sector energy use by 10% in the near future and by 30% by the end of the decade. Authorities will offer financial incentives to organizations that save energy and will also create a digital system for monitoring consumption. Measures include:

- Turning off lights and computers; and

Ireland is exempt from the EU target because it gets most of its gas from the U.K., but the country is still encouraging people to reduce their power use this winter via the "Reduce Your Use" campaign.