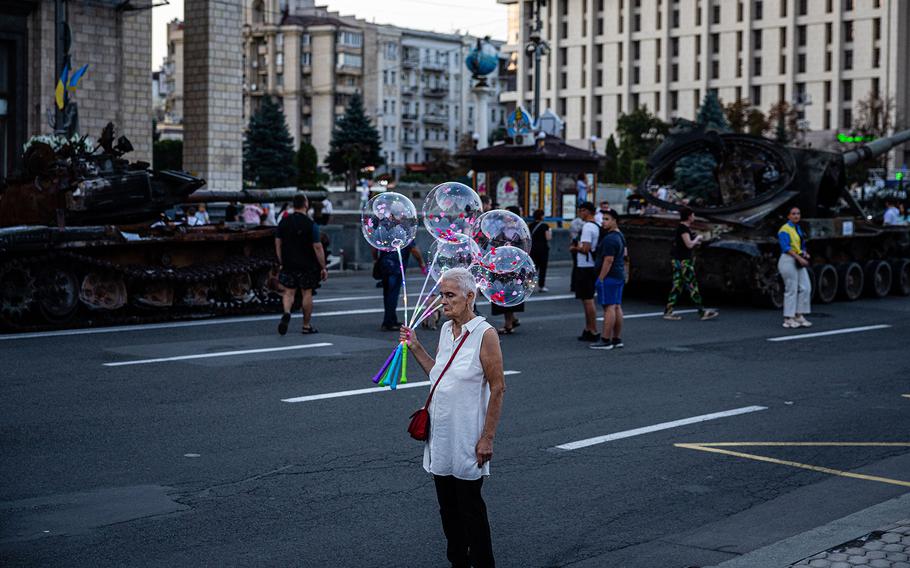 An elderly woman sells glowing balloons next to a destroyed Russian military equipment at Khreshchatyk street in Kyiv on Aug. 23, 2022, that was turned into an open-air military museum for a celebration of Ukraine’s Independence Day on Aug. 24, amid the Russian invasion of Ukraine. (Dimitar Dilkoff/AFP via Getty Images/TNS)

WASHINGTON (Tribune News Service) — Far from bogging down in a stalemate, the Russian invasion of Ukraine has evolved into an increasingly dangerous conflict as it passes the six-month mark, with fighting around Europe’s largest nuclear plant, a high-profile assassination in Moscow, escalating threats and daring Ukrainian attacks in Russian-held territory.

“The dynamic of the battlefield” is shifting, said retired Lt. Gen. Mark Hertling, former commander of U.S. Army Europe. Armed with increasingly lethal weapons from the U.S. and other allies, Ukraine has been able to occasionally seize the initiative and surprise Russian forces.

It is not clear, however, how long that can last or whether Ukraine can build on those small victories enough to dictate the course of the war.

“The war is far from over,” said Daniel Serwer, a senior fellow at the Washington-based Foreign Policy Institute who specializes in the study of war. “The Ukrainians lack the manpower to conduct a conventional offense but are using their supplies of NATO-origin artillery, drones, antitank missiles and other weapons to batter the Russians and their supply lines.”

The six-month mark in a war that has killed thousands of people and driven millions from their homes overlapped with a normally joyous national holiday. Wednesday marks 31 years since the country broke free from the collapsing Soviet Union.

Independence Day was greeted by Ukrainians with a mixture of defiance and dread, as the U.S. State Department said it had “information that Russia is stepping up efforts to launch strikes against Ukraine’s civilian infrastructure and government facilities in the coming days” and repeated entreaties that U.S. citizens leave the country.

The warnings prompted authorities to ban mass gatherings in the capital, Kyiv, and in the country’s second city, Kharkiv, and order residents to shelter indoors.

Tensions are especially running high over Russia’s claim that Ukraine carried out the assassination Saturday of Daria Dugina, the daughter of a prominent far-right Russian political theorist and herself a vociferous proponent of the war.

The government of Ukrainian President Volodymyr Zelenskyy has denied any involvement in the weekend car bombing — a dramatic strike on the outskirts of the generally safe Russian capital that touched the inner ring of President Vladimir Putin’s confidants.

At a memorial service Tuesday, a who’s who of Putin-fed nationalism, including the founder of a notorious mercenary group fighting in Ukraine and parts of Africa, mourned the loss and demanded severe punishment of Ukraine. Her death, said her tearful father, Alexander Dugin, “can be justified only by victory.”

Over the weekend, Kyiv residents flocked to a display of disabled Russian tanks and armor that had been hauled into the heart of the capital on flatbed trucks to celebrate the unexpectedly staunch fight put up by Ukrainian defenders in the war’s early days. The mood was jovial as children clambered on the hulking vehicles as parents and grandparents looked on.

But on Saturday night, Zelenskyy grimly advised compatriots that Russia might bombard civilian areas of the capital and other cities during the independence anniversary.

“The blue-and-yellow flag of Ukraine will again fly where it rightfully should be, in all temporarily occupied cities and villages of Ukraine,” Zelenskyy declared later.

The North Atlantic Treaty Organization pledged its ongoing support, with Secretary-General Jens Stoltenberg on Tuesday calling the conflict a “battle of wills.”

“We must sustain our support for Ukraine,” he said at a virtual conference focused on the situation in Crimea, the strategically important peninsula illegally seized by Moscow in 2014 in what would prove a forerunner to the full-scale invasion that began Feb. 24. Zelenskyy has vowed to retake the peninsula.

In recent weeks, explosions near fuel depots and other strategic sites in Crimea startled the Russian occupiers and gave way to speculation that Ukraine was launching the first salvos in a counteroffensive.

In addition to occupying Crimea in the south, Russia has eked out gains in other Black Sea coastal areas — blocking critical shipments of grain to the world for weeks — and in the eastern Donbas region, where pro-Russia separatists have also been operating for several years.

Putin’s long-held design has been to expand Russia’s imperial glory by retaking Ukraine and its fertile fields and abundant mines, a land he believes does not merit being an independent nation.

One of the most potentially calamitous fronts in the war has been fighting that is raging in southern Ukraine around the Zaporizhzhia nuclear power plant, which Russian forces seized early in the invasion. United Nations nuclear power monitors worry Russian strikes or Ukrainian return fire could unleash radiation that could kill tens of thousands of people.

“As we speak, Ukraine, neighboring states, the entire international community are living under the threat of a nuclear catastrophe,” the deputy U.S. ambassador to the U.N., Richard Mills, told a special Security Council meeting on Tuesday. “And people are, understandably, terrified.”

Negotiations with Russia and Ukraine to demilitarize the area and give the U.N. access collapsed last week, and the U.S. formally summoned and chastised the Russian ambassador to Washington for his country’s “reckless disregard for nuclear safety.”

The Pentagon said the military supplies would be especially useful in Ukraine’s southern and eastern territories, which Russia has sown with mines, and where Zelenskyy’s government would like to push a string of counterattacks to take back cities and towns. Such military action would probably require closer-range combat than has generally taken place thus far, as well as extensive detonation of mines.

Hertling, the retired general who is a regular analyst for CNN, said a large counteroffensive by Ukraine was unlikely given continued limitations and the larger, if somewhat inept, expanse of Russian forces and especially air power. But that doesn’t mean Ukraine hasn’t made advances, he said.

“Russia now realizes they have to defend in more places, which further drains their forces from the fight both in the east and parts of the south,” he said. “That kind of action puts the enemy on the back foot.”

U.S. public opinion as well as reactions in Congress have been generally positive toward President Biden’s handling of the Ukraine conflict, his administration’s sanctions on Russia and its ability to galvanize a large, though incomplete, coalition of international support.

The ability of Ukraine to fight depends in large part on the resolve of its European allies — and that resolve is likely to be severely tested once winter sets in and they badly need Russian oil to stay warm.

Wilkinson reported from Washington and King from Berlin.