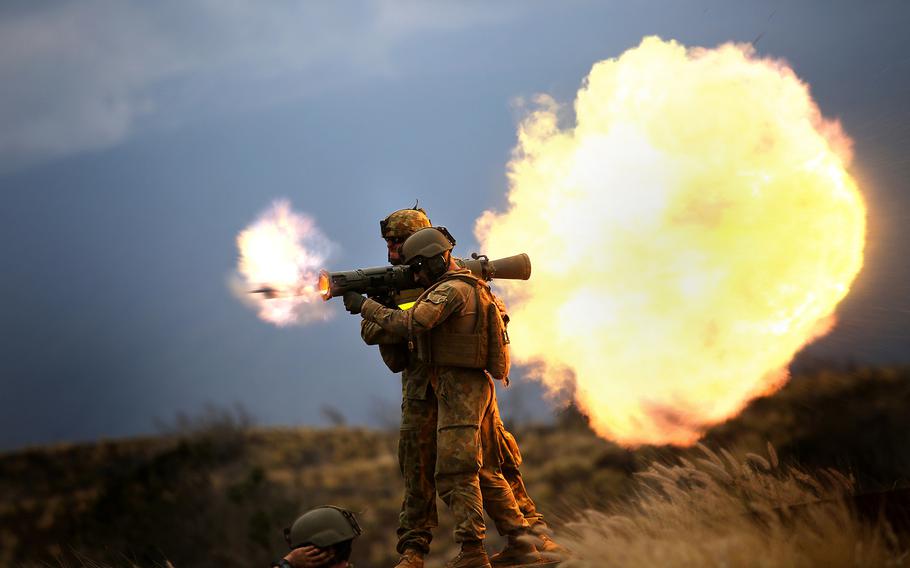 Australian soldiers fire a Carl Gustav recoilless rifle during training in 2014. The U.S. is providing Ukraine with 2,000 rounds for the weapon, which has a range of a few hundred meters. (Matthew Callahan/U.S. Marine Corps)

The Pentagon is sending new weapons and equipment to Ukraine that will better prepare its military to fight Russian troops at closer ranges, potentially signaling that Kyiv and its backers see an opportunity to retake lost ground after weeks of grinding artillery duels along the front lines.

Ukrainian officials have been openly discussing an offensive on the Russian-held strategic port city of Kherson, but there is little evidence along the front lines that Ukraine could execute an operation that would require large numbers of troops, armored vehicles and powerful, close-range weapons to overcome the numerically superior Russian military.

The latest package appears to be a first step toward addressing some of the shortfalls in the weaponry Ukrainian forces would need to launch a counterattack, particularly across mined areas in the approach to well-entrenched Russian positions. A successful offensive would include an ability to attack from a variety of distances.

The nearly $800 million in assistance announced Friday will include 40 bomb-resistant vehicles with rollers attached to their front, which help detonate mines, and lighter howitzers that are easier to move than the more powerful guns the U.S. has previously sent. The aid will also include recoilless rifles with a range of few hundred meters and missile launchers limited to less than three miles — much closer than the current distance between Ukrainian and Russian units in many places.

“The mine-clearing is a really good example of how the Ukrainians will need this sort of capability to be able to push their forces forward and retake territory,” a senior U.S. defense official told reporters on Friday. “These are capabilities that are enhancing the Ukrainians’ mobility as they look at this very challenging environment in southern Ukraine, in particular.” The official spoke on the condition of anonymity under ground rules set by the Pentagon.

The armored vehicles known as MRAPs, an iconic vehicle in the Iraq and Afghanistan wars, would shield troops from explosions and small-arms fire while triggering mines with rollers that project from the front like lobster antennae. U.S. security aid in recent months has focused on long-range rockets and howitzers such as multiple-launch precision rocket systems, known as HIMARS, to support Ukraine in the brutal artillery fight in the eastern Donbas region. Those weapons have been effective at precisely targeting enemy command posts and ammunition depots, and have led to a reduction in the scale of Russia’s shelling. But they have not shifted the front lines.

“We haven’t seen a significant retake of territory, but we do see a significant weakening of Russian positions in a variety of locations,” the senior official said.

Ukrainian troops have struggled to punch through Russian-held territory or capitalize on earlier counteroffensives, such as one near Kherson in June that liberated villages in the region. Ukrainian forces have not made much progress since then, and have found themselves exposed in flat terrain as Russian troops surge artillery units into the area and launch reconnaissance missions to probe Ukrainian defenses.

The TOW missiles being sent to Ukraine can either be set up on a heavy tripod or loaded onto the back of a vehicle such as a Humvee. That setup allows troops to launch a missile and quickly depart to avoid return fire — a technique known as “shoot and scoot.”

The Humvees can also be used to haul newly provided 105mm howitzers, which trade power and range for ease of transport and maneuverability compared to the heavier M777 howitzers the U.S. has already sent. 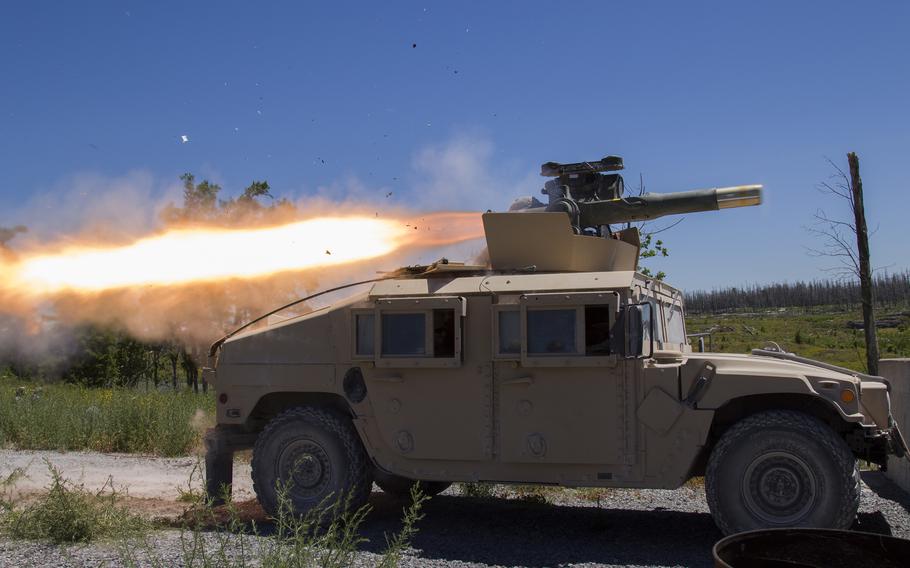 U.S. Soldiers in the Vermont National Guard fire a TOW missile system from a Humvee in 2017. The U.S. is providing TOW missiles and Humvees to Ukraine. (Avery Cunningham/U.S. Army)

The package also includes 2,000 rounds for Carl Gustav recoilless rifles. The weapons are carried by infantrymen to fire 84 mm rounds at vehicles and fighting positions within a few hundred meters.

Rob Lee, a senior fellow with the Foreign Policy Research Institute and expert on the Russian military, cautioned that the most recent Pentagon package is not proof that an offensive is coming. Elements of the aid may have other uses, and some parts, such as the MRAPs, may not be ideal for close combat because of their high silhouette and visibility, but are better than the alternative of unarmored trucks.

Other weapons, Lee said, suggest a possible desire on the part of the Pentagon to provide weapons but draw from stocks they were already divesting in, rather than dipping into critical reserves and harming readiness by shipping expensive or advanced weapons. The U.S. has already eyed retiring vehicles like Humvees and MRAPs and weapons like the TOW.

“I wouldn’t be surprised if there was an economic element to this,” Lee said. Some newly provided weapons could also be useful in the artillery fight in the east or an offensive in the south, such as using the ScanEagle drone and radar-detecting missiles in tandem to find and destroy Russian air defense systems. Removing those from the battlefield would allow troops to harness their own drones in a counterattack and move more freely around the battlefield.

A classic counteroffensive with a lot of troops and vehicles may not be the best strategy anyway, Lee said. Ukraine has found success bombarding Russians with long-range rockets and sabotaging positions in occupied Crimea, undermining confidence that Russians far from the battlefield are safe.

“I don’t know if they have the forces to do it,” Lee said of an offensive in Kherson. An attrition strategy, he said, “makes the most sense for Ukraine.”