Latvia to topple Soviet-era monument a week after Estonia 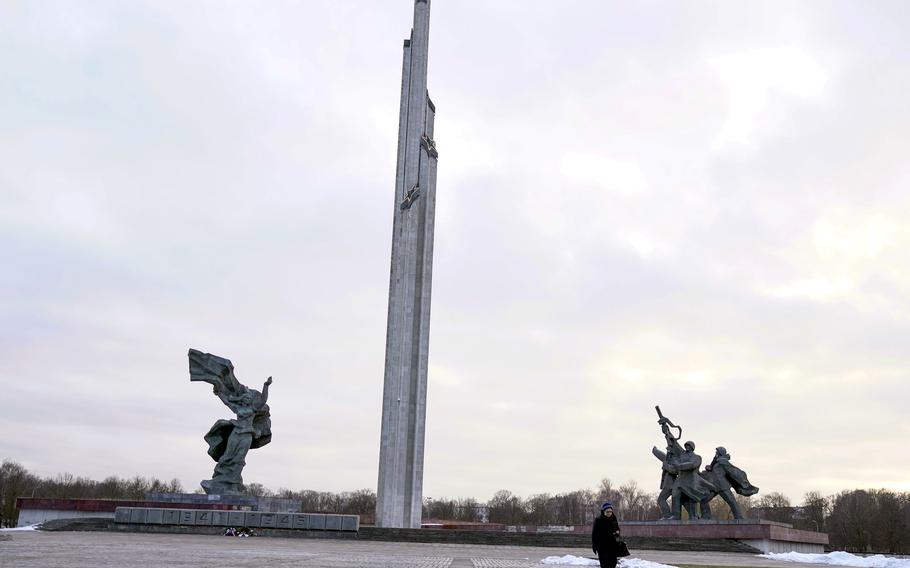 The Monument to the Liberators of Soviet Latvia and Riga from the German Fascist Invaders stands, in Riga, Latvia, Feb. 23, 2022. (Roman Koksarov/AP)

COPENHAGEN, Denmark — Latvia will tear down a Soviet-era monument on Tuesday that commemorates the Red Army's victory over Nazi Germany, authorities said, coming a week after Estonia removed a similar landmark.

Police have erected a yellow fence to cordon off the area near the monument, which stands like a high-rise in downtown Riga's Victory Park. It has a 260-foot concrete spire with a Soviet star on top, with two groups of statues beside the edge of a pond.

The monument, built in 1985 while Latvia was still part of the Soviet Union, will be felled using machinery on Tuesday, said Janis Lange, the Latvian capital's executive director. He told a news conference that it will be toppled without the use of explosives, according to Latvian television.

It wasn't immediately clear what would happen to the monument after it's taken down.

The concrete obelisk is part of a complex that includes two groups of statues — a band of three Red Army soldiers and on the other side a woman representing the "Motherland" with her arms held high. The whole complex will be taken down.

Latvia, which shares a 133-mile border with Russia, has a large group of ethnic Russians living in the country. On Russia's annual Victory Day holiday on May 9, they gather in front of the monument to lay flowers with concerts also organized.

The event has caused controversy among people in Latvia, which since regaining independence in 1991 has become a member of NATO and the European Union.

Over the weekend, the Latvian Russian Union said it plans to stage a protest on Monday evening. The group says it has gathered more than 10,000 signatures of people who are against removing the monument, the Baltic News Service said.

But Lange told a news conference Monday that the Riga City Council said it won't issue permission for them to hold a protest.

In May, Lativa's parliament voted to pave the way for the demolition of the monument in the capital and the Riga City Council followed suit.

The Baltic countries have removed many monuments glorifying the Soviet Union or communist leaders.

In 2007, the relocation of a World War II monument of a Red Army soldier in Estonia's capital, Tallinn, sparked days of rioting. Last week, Estonia removed a Soviet-era monument with a tank on top outside the town of Narva in the Baltic country's Russian-speaking east, and moved the tank replica to a war museum north of Tallinn.

Latvia, Estonia and Lithuania have taken a hard-line stance against Russia's invasion of Ukraine.