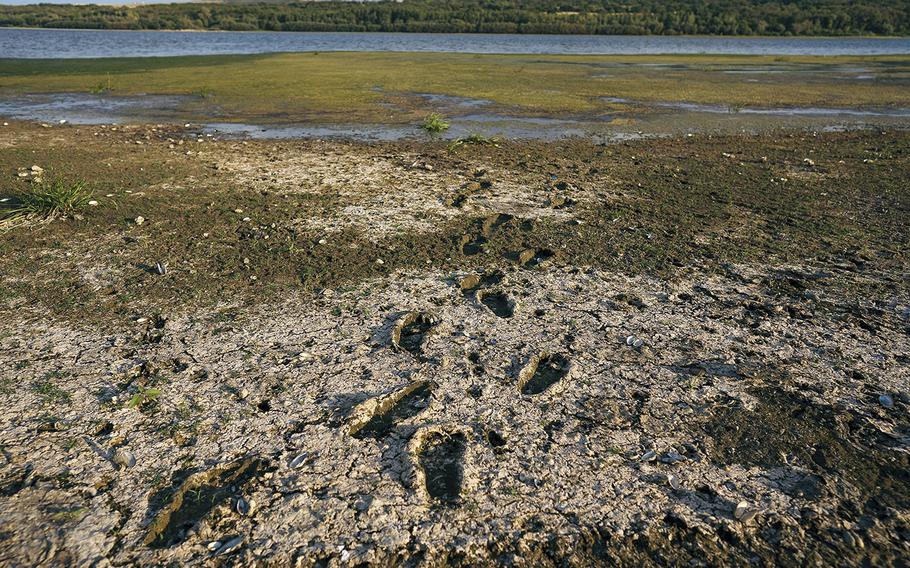 An exposed section of riverbed on the Danube near the town of Zimnicea, Romania, on Aug. 9, 2022. (Andrei Pungovschi/Bloomberg )

One of the worst droughts on record in Europe has parched the continent's major waterways, revealing relics such as a long-submerged village and World War II-era battleships.

This week, low water levels on the Serbian section of the Danube river exposed a graveyard of sunken German warships filled with explosives and ammunition. The vessels, which emerged near the port town of Prahovo, were part of a Nazi Black Sea fleet that sank in 1944 while fleeing Soviet forces. More ships are expected to be found lodged in the river's sandbanks, loaded with unexploded ordnance.

A junior Serbian transport minister told local media there were around 10,000 explosive devices in the water.

Other ruins have also emerged around Europe as waters recede in the drought. In July, an ancient Roman bridge built during the first century B.C. was uncovered in the Tiber river, and in August, a village that had been deliberately flooded in 1963 to build a dam appeared from the Belesar Reservoir in Spain.

The village is one of several sites submerged under reservoirs in Spain. A ghost town that had been flooded to build a dam on Spain's border with Portugal emerged in February, revealing houses with windows and walls still intact.

The drought has threatened shipping routes, food supply and electricity in Europe this summer. European Union researchers said earlier this month that nearly half of the continent is under "warning" conditions, which connote a severe drought and a major soil moisture deficit, The Washington Post has reported.

This is not the first time most of the sites and relics have poked out of the water. The Nazi ships, for instance, also made an appearance during a 2003 heat wave. But the severity of this year's drought has made the waterways particularly difficult to navigate, as the sunken boats pose a danger to fishing and shipping vessels that have to skirt the hulks to get by. Ships now have to squeeze through a 110-yard stretch of the Danube, nearly half the available waterway they once had access to, according to Reuters.

Officials estimate it will cost some $30 million to remove over 20 ships, ammunition, and explosives, the newswire reported.

But the dry conditions have also given archaeologists and researchers a rare glimpse into the past and contact with ruins that are normally difficult to access.

Earlier this week, the unrelenting heat wave that left the Iberian peninsula drier than any time in the last 1,200 years also exposed dozens of prehistoric stones in a reservoir in central Spain.

The drought drained the reservoir to a fraction of its capacity, the Spanish government said, granting archaeologists precious access to the Dolmen of Guadalperal, believed to be from 5000 B.C. Known as the "Spanish Stonehenge," in a reference to the prehistoric monument built in what is now England, the stones were first uncovered in the 1920s. The area where they stood was flooded in the 1960s to build a dam, and they have only been fully visible a handful of times since, according to the NASA Earth Observatory.

"It's a surprise, it's a rare opportunity to be able to access it," archaeologist Enrique Cedillo, who is rushing to examine the relics before they become submerged again, told Reuters.

The Washington Post's Matthew Cappucci contributed to this report.