Across the river from Ukraine nuclear plant, shelling adds to fear 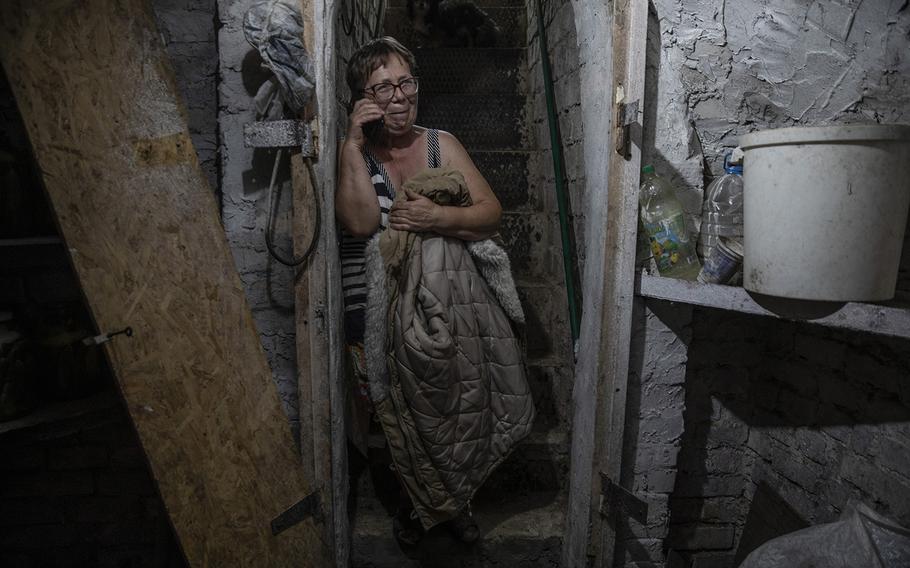 Kateryna Semenova shelters underground during a nearby Russian strike on Nikopol on Aug. 19, 2022. (Heidi Levine for The Washington Post)

NIKOPOL, Ukraine - As Kateryna Semenova, 65, pointed out the damage from the rocket that landed in the bathtub three nights earlier, there was a loud boom from outside.

"Drone!" shouted a neighbor who had been helping fix up the building, as they started running for shelter in the basement.

In Nikopol, just two miles across the Dnieper River from the Zaporizhzhia Nuclear Power Plant, the threat of imminent nuclear catastrophe is compounded by daily shelling from Russian forces near the plant.

Although the attack on the plant that Ukrainian intelligence said it feared Russia was planning on Friday had not happened by late evening, shelling from its positions across the water continued. But if the Moscow's intention was to seed panic, it did not succeed in the war-weary communities near the plant.

In Zaporizhzhia, 30 miles northeast of the plant, some families tearfully boarded buses to Europe on Friday, calculating that a major attack on the plant, even if unlikely, was too much to risk. But those most inclined to flee are already long gone.

Semenova had not been considering it after the rocket ripped through her bathroom wall on Tuesday night. But on Friday, as she and her husband sheltered in the basement among boxes of onions and pickle jars, she was not so sure anymore. One neighbor was planning on leaving, another won't leave his goats. Kateryna Semenova, 65, outside her home in Nikopol, across the river from the Zaporizhzhia nuclear power plant, on Aug. 19, 2022. Her home had been damaged by a Russian rocket. (Heidi Levine for The Washington Post) People stand outside a residential building in Nikopol that was damaged by a Russian strike early on the morning of Aug. 19, 2022. (Heidi Levine for The Washington Post)

A third boom reverberated through the tiny basement.

Her phone rang as people in the community began checking on each other.

"They are shooting somewhere, we are down low," she told the neighbor on the line.

"She was asking if we were alive," she explained to Washington Post journalists sheltering with her.

The city's military administration reported five hits with artillery shells in the area on Friday afternoon, as bombardment that was once confined to nighttime comes more frequently during the day.

Ukraine has accused Russia of shelling this small city on the banks of the Dnieper River from the grounds of the plant, using fear of damaging the plant as a shield. Ukrainian soldiers say they shoot back at Russian positions on the other side, but not into the plant.

As international alarm has built, both sides have traded accusations over recent shelling that has damaged the power plant. Concerns rose on Friday, after Ukrainian intelligence said Russia had sent workers at the plant home for the day, and could be planning an attack inside.

Tetiana Zhivtsova, 62, didn't even see the public warnings that there might be an attack until Friday afternoon. She had spent the night in the basement. And when she came up again, she had been busy clearing up the glass in the family's damaged apartment. Tatiana Zhivtsova, 62, left, with her daughter Svitlana Zhivtsova, 40, and her mother, Alla Zhivtsova, 85, as they shelter underground in their apartment building in Nikopol on Aug. 19, 2022. (Heidi Levine for The Washington Post)

Nikopol is too close to the plant for sirens to be of use - there's no time to switch them on. Instead residents on the other side send warnings if they see artillery batteries being rolled out.

It was only when another shelling warning sent Zhivtsova, her mother and her daughter back to the basement in the afternoon that they stopped to check the news.

Yulia Firsova, 52, who heads the housing association for Zhivtsova's building and two others in the area, said only around 20 percent of the apartments are still inhabited.

The fear of a nuclear incident already made many leave, she said. There was the first wave when the local authorities started handing out antiradiation pills in the city a few months after the war started, she said. Since the shelling from the plant began, more have fled.

"It's not going to be a second Chernobyl," she said, referring to the nuclear disaster in northern Ukraine in 1986. "It's going to be bigger," she said, citing the fact that the plant is the largest in Europe. But many experts disagree, saying Zaporizhzhia's six nuclear reactors are built under separate shields of reinforced concrete, designed to withstand attacks.

Still, concerns are high as both sides trade blame over shells landing within the plant's territory. "We just want this all to be over," said Firsova. She doesn't sleep overnight in her apartment in Nikopol anymore, staying in a nearby village instead. Few do. Some spend the nights sleeping in their cars outside the city.

But for many it's still hard to leave.

"If you can pack all your life into one small backpack and have everything you need, good luck to you," said 76-year-old Stanislav Vahovskyi, whose apartment was burned in a strike in the early hours of Friday morning. "But the things people need, you can't pack into a backpack."