Westerners are sponsoring slogans written on bombs aimed at Russians 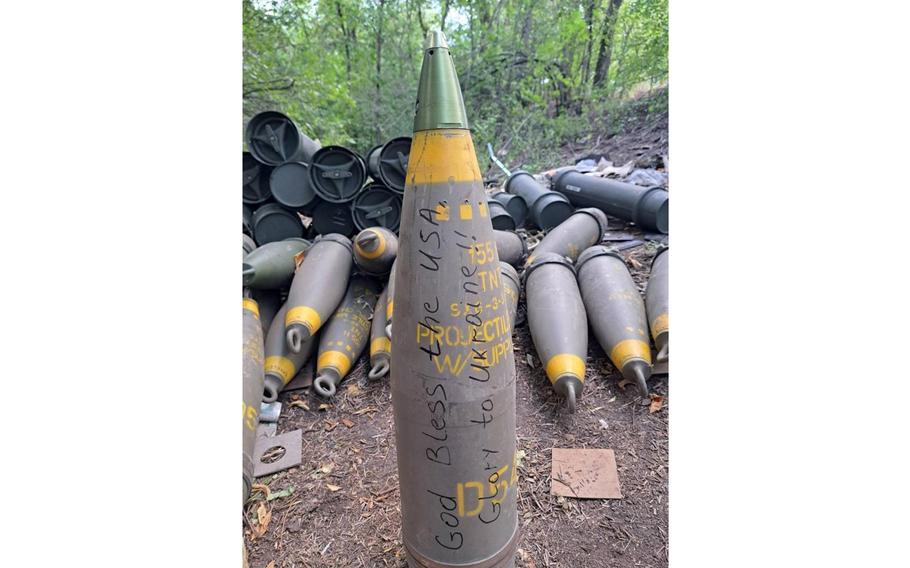 An artillery shell emblazoned with the message "God Bless the USA. Glory to Ukraine!!" The Ukrainian crowdfunding group Sign My Rocket arranged for the inscription at the request of a donor from the United States. (Photo courtesy of Sign My Rocket)

KYIV, Ukraine — At a military position near the front line, members of a Ukrainian military unit snickered as a soldier with tattooed arms scrawled a phallic symbol on an artillery shell designed for an M777 howitzer cannon.

At a separate position, a Ukraine soldier loaded a shell that read “Hello from Texas” into a medium-range cannon. Seconds before it fired with a loud boom, the operator announced “from Texas” in a gleeful Slavic accent.

The emergence of slogans and symbols emblazoned on U.S.-made artillery — originally a creative outlet for Ukraine soldiers serving in the country’s east — has become a growing and lucrative fundraising tactic for Ukrainians in the nearly seven-month war.

Local crowdfunding websites have raised tens of thousands of dollars for the war effort since Russia invaded Feb. 24. They offer people anywhere in the world the chance to commission a message on a growing menu of bombs and missiles before they are fired at advancing Russian forces.

The most prominent crowdfunding group — Sign My Rocket — started by selling messages on Soviet-made 82 mm caliber mortar rounds for $30 each. But eventually co-founder Anton Sokolenko realized if it sold messages on more powerful weapons, benefactors from the United States, Britain, Germany, Canada, Switzerland and elsewhere would pay even more.

“We got bigger and bigger shells,” Sokolenko said in an interview from his home in Cherkasy, a city in central Ukraine. “Ninety-five percent of the orders are in English and most are from the United States.”

Sokolenko’s organization has now moved beyond mortar shells and is selling inscriptions on antitank mines, bomb-laden drones, VOG 17 hand grenades, 220 mm rockets, 2S7 Pion heavy artillery and scores of other explosives. He says it has raised more than $150,000 for the Ukrainian military and facilitated scores of messages including “From NATO with Love,” “London Says Hi” and “Remember the Alamo.” 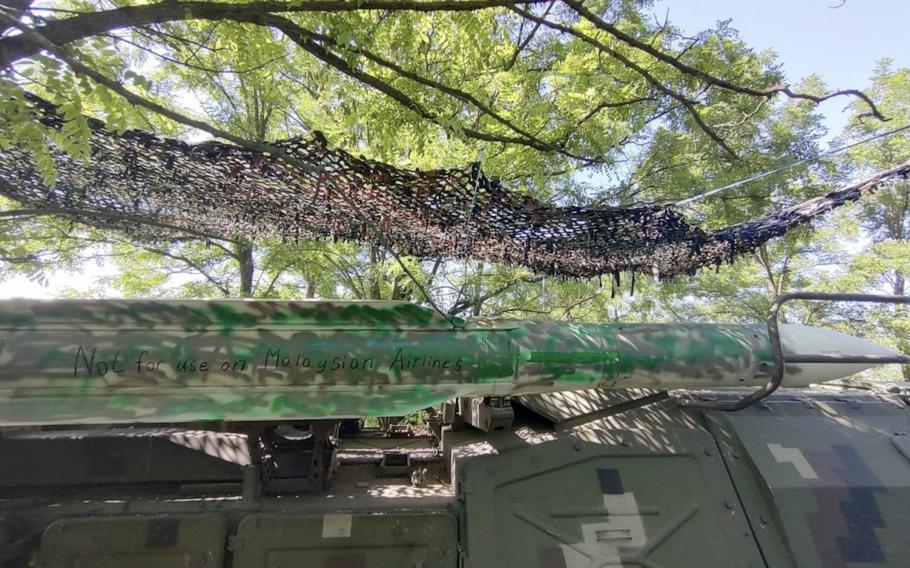 A Soviet-designed Buk surface-to-air missile with the inscription "Not for Use on Malaysian Airlines." (Photo courtesy of Sign My Rocket)

The group recently branded a Buk surface-to-air missile with the message “Not for Use on Malaysian Airlines” — a reference to the downing of a commercial airliner in 2014 by pro-Russian separatists armed with the same missile system, which killed 298 people.

The fundraising effort is not officially sanctioned by the Ukraine military. Sokolenko’s organization relies on his informal connections to Ukrainian military units in the field. The proceeds go toward buying equipment for Ukraine’s military units, including camouflaged vehicles and auto parts.

After a donation is collected, a Ukrainian soldier scrawls the requested message on the munition and takes a picture of it. The picture is then sent to the donor.

“I’ve already donated $3,000,” said Colin Smith, a director at an e-commerce company in Dallas who has dedicated artillery shells to friends and relatives for birthdays, anniversaries and a job promotion.

Smith first discovered Sign My Rocket on a Reddit page earlier this year. He recently gave his wife a picture of an artillery shell for their anniversary, inscribed with their initials and wedding date: “C & Y. Est. 2021.”

Colin Smith of Dallas purchased the slogan on this artillery shell for his wife for their anniversary. (Photo courtesy of Sign My Rocket)

“She loved it,” he said, “though she’s now kind of tired of me telling her about the war.”

The most expensive item on the website is the naming rights to a Russian-made T-72 tank for $3,000 — a topic of contention in the Smith household.

“I’m trying to get my family to go in on the tank,” Smith said, “but my wife said I’ve already spent too much.”

Ukrainians are far from alone in using bombs as a canvas for political or nationalist expression. European and U.S. soldiers have written messages on artillery in every conflict since at least World War I. After a Russian attack in April that killed more than 50 people at a train station in Kramatorsk, a missile fragment was found wedged into the ground bearing the handwritten message: “For the Children.” But the selling of customized messages as a fundraising tool is a novel innovation.

The success of Sokolenko’s efforts has already prompted the creation of other crowdfunding sites.

The website RevengeFor, launched three weeks ago by a Kyiv native and IT worker Nazar Gulyk, appeals to foreigners with historical grievances against Moscow who would like to support Ukrainians as their proxy.

“What’s your reason for wishing to take revenge on Russia?” says a group fundraising video displaying the image of Joseph Stalin and Vladimir Lenin and current Russian President Vladimir Putin. “Ukraine is already avenging everyone on the battlefield! Avenging you and avenging the suffering of your people too!”

In just three weeks, the group says it has raised $52,000 from an array of donors from the United States, Canada, Germany, Britain, Poland, Hong Kong, Belgium, Georgia, Czech Republic and Norway. The group sends its proceeds to Come Back Alive, a Ukrainian charity that has equipped troops with military vehicles and surveillance tools.

Gulyk says he is in negotiations with his military contacts for his most ambitious offering yet: naming rights on a munition for a U.S. High Mobility Artillery Rocket System, or HIMARS, the weapon widely credited with slowing Russia’s military advance in the East and South.

U.S. officials are aware of the effort but say the unauthorized defacement of U.S. weapons does not rank among their most pressing concerns in a conflict that has killed tens of thousands of people, increased food and energy prices and shaken European security policy to its core.

Ukrainian soldiers involved in marking up the weapons are reluctant to comment about the process given the unofficial nature of the effort. One soldier who has written on several weapons for “Sign My Rocket” described his experience on condition of anonymity to avoid punishment from his superiors.

“I didn’t believe that it was real,” he said, recalling when the group first approached him.

It was only when the group donated used cars and spare tires to his military unit with the proceeds from the inscriptions that he believed the operation was legitimate, he said.

He said the project existed outside the oversight of commanding officers. “The superiors turn a blind eye,” he said.

When asked if senior military leaders were aware of the effort, a spokesperson for the Ukrainian Armed Forces declined to comment.

Many of the inscriptions include profanities directed at Putin or Russian troops that are unfit for print.

One foreign diplomat in Kyiv said the scene of Ukrainian forces drawing ever more irreverent slogans on munitions recalled the 19th century oil painting “Reply of the Zaporozhian Cossacks.” In the painting, Cossacks from what is now modern day Ukraine huddled around a table writing out a letter of ever more offensive insults toward the Ottoman sultan who sought their allegiance.

“The tradition of resistance is strong,” said Yaroslav Hrytsak, a Ukrainian historian and professor at the Ukrainian Catholic University.

He said “humor” and “obscenities” have long typified Ukraine’s response to foreign occupation.

“It could be a rough kind of humor,” he said.