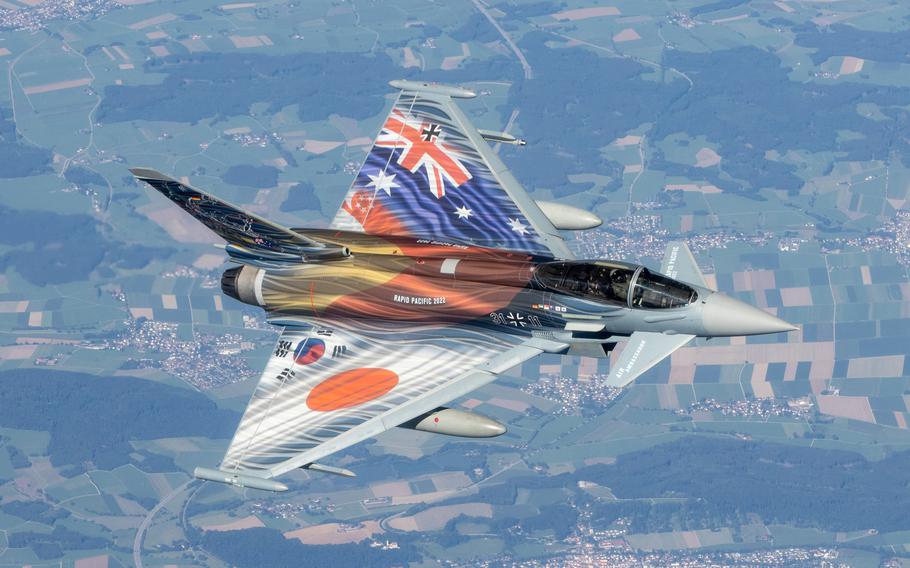 A German air force Eurofighter nicknamed Air Ambassador flies over Germany in an undated file photo. The jet received a custom foil cover for exercise Rapid Pacific 2022, which is the first time the German air force sent its jets to the Indo-Pacific. (German air force/Twitter)

KAISERSLAUTERN, Germany — The German air force added some flash to its rapid flight of Eurofighters to Singapore, en route to an exercise in Australia and other missions in the Indo-Pacific region.

One of the planes sent to take part in Rapid Pacific, nicknamed the Air Ambassador, was widely emblazoned in foil wrap with a design featuring the flags of Germany, Singapore, Australia, South Korea and Japan.

During the marathon flight from Neuburg, crews traveled roughly 8,000 miles and refueled 11 times, the German air force said Monday in a statement. The six Eurofighters arrived in Singapore in just 24 hours, marking the first time the German planes have been sent to the region.

After the Singapore stop, air crews will face a full training and exercise schedule with various Pacific partners. 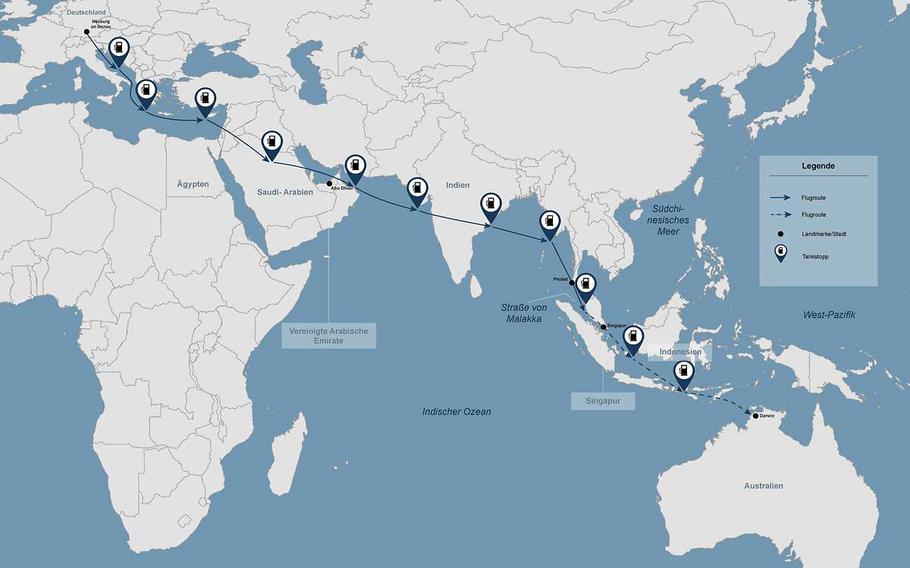 A map shows the travel path and refueling stops of six German Eurofighters deploying to Singapore for exercise Rapid Pacific 2022, which is the first time the German air force sent its jets to the Indo-Pacific. (German air force)

First, they are scheduled to participate in exercise Pitch Black in Australia, from Aug. 19 to Sept. 9, where the fighter jets will practice combat training flights alongside allies from France, the Netherlands, the U.K., the U.S. and regional partners, according to a NATO statement.

After that, crews will practice protecting ships at sea during naval warfare exercise Kakadu hosted by the Australian navy.

Before returning to police European airspace, the fighters also are scheduled to train with their counterparts from Singapore’s air force and visit Japan and South Korea. 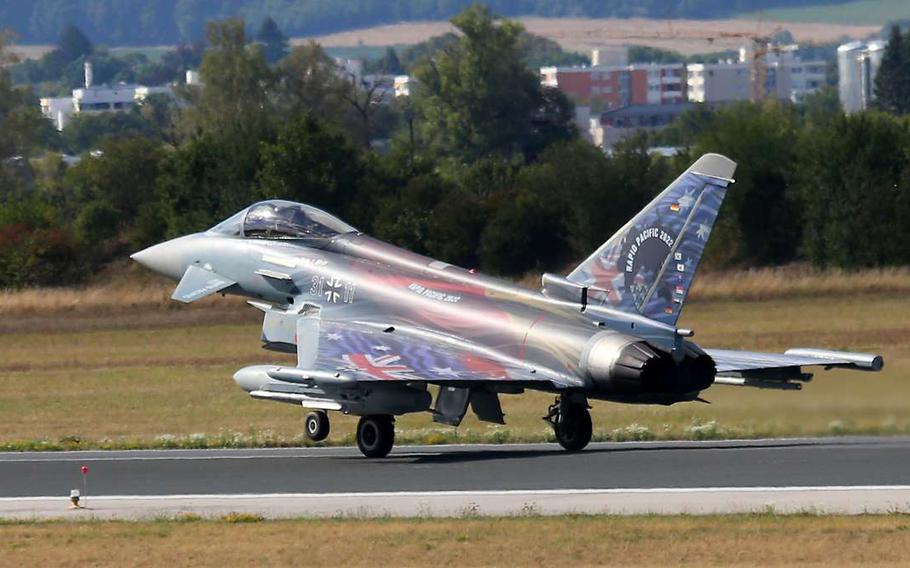 A German air force Eurofighter nicknamed Air Ambassador takes off at Neuburg an der Donau air base, Germany. The jet received a custom foil cover for exercise Rapid Pacific 2022, which is the first time the German air force sent its jets to the Indo-Pacific. (German air force/Bruno Haelke) 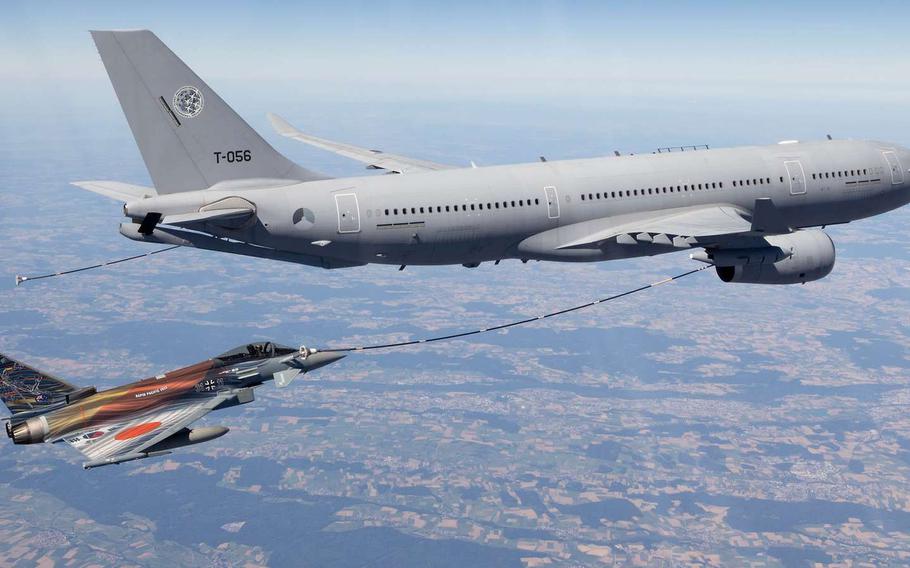 The planes and crew are assigned to Tactical Air Force Squadron 74 in Neuburg. The unit helps protect German airspace and supported the NATO air policing mission in Romania amid Russia’s full-scale invasion of Ukraine in late February.

"We are showing that we also think about security beyond Europe," German Defense Minister Christine Lambrecht said in a statement July 22.

In September, the European Union introduced a strategy document that called for stronger security ties in the Indo-Pacific. The flights come as Western tensions with China have risen, amid visits to Taiwan by high-profile U.S. lawmakers and shows of force by the Chinese military in the Taiwan Strait. 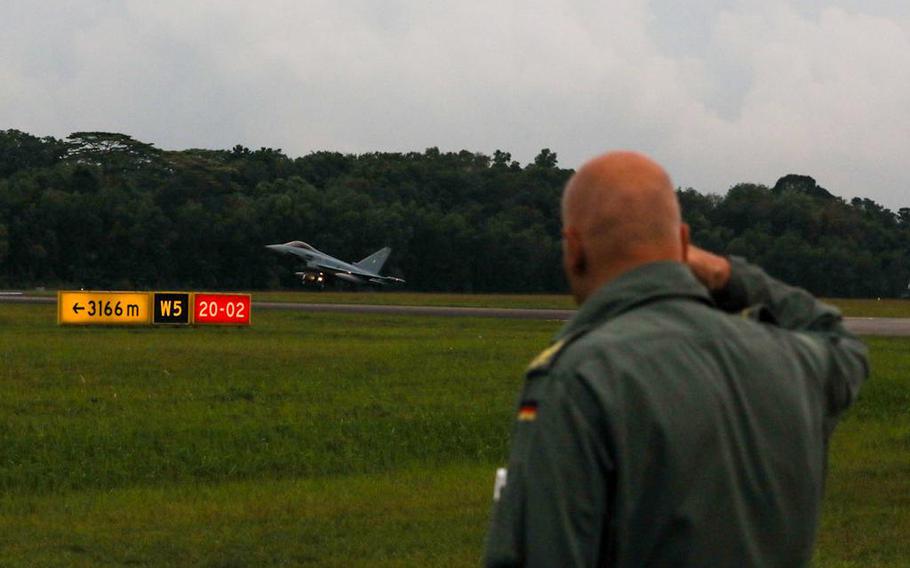