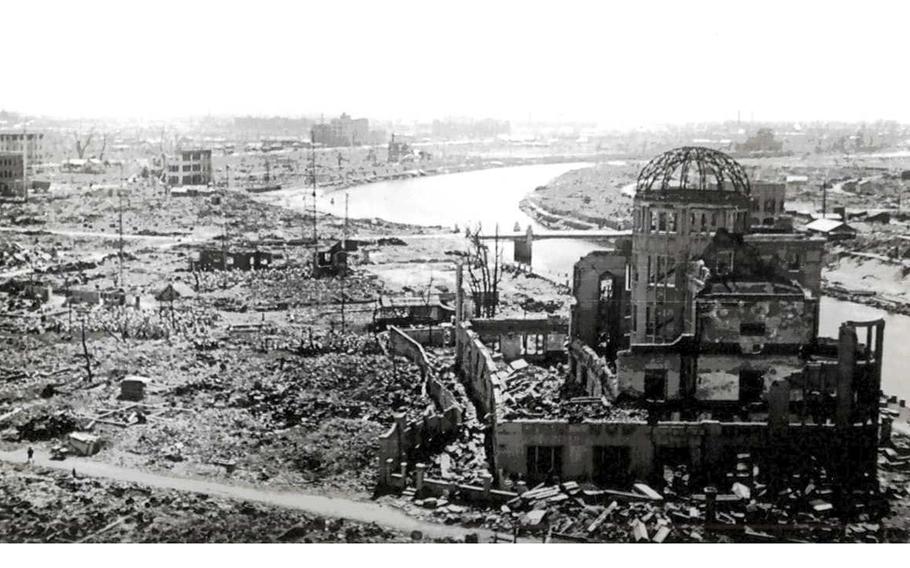 A structure surrounded by destruction is seen in Hiroshima, Japan, after the United States dropped an atomic bomb on the city on Aug. 6, 1945 in the closing days of World War II. (U.S. Army Intelligence Center of Excellence)

Some two-thirds of the world could starve to death in the event of a nuclear war between Russia and the United States, according to a Rutgers University-led study published Monday. Nuclear conflict would lead to "catastrophic" disruptions in food supplies, as sun-blocking soot and ash would wilt crops around the world, researchers wrote in the peer-reviewed study published in the journal Nature Food.

Even a smaller-scale nuclear war between Pakistan and India would devastate food supplies, slash global production by 7% within five years and kill up to 2.5 billion people. Food insecurity in these cases would be deadlier than the nuclear blasts, the study predicts.

"The data tell us one thing: We must prevent a nuclear war from ever happening," climate scientist Alan Robock, co-author of the study, said in a statement.

The researchers examined how wind patterns could spread smoke and fire from nuclear attacks and cloud skies above major food exporters such as the United States and China. The lack of sunlight would collapse harvests and could lead to a 90% drop in animal, fishing and crop yields worldwide within four years of a conflict between major nuclear powers.

Russia's invasion of Ukraine and stepped-up Chinese military drills near Taiwan have renewed fears of nuclear conflict. After war broke out in Ukraine, Russian President Vladimir Putin said his nuclear forces were "combat ready," stoking fears of possible nuclear conflict with the West 30 years after the end of the Cold War. (Russian officials later attempted to soften Putin's warning.)

China has conducted numerous drills around Taiwan following recent trips by U.S. lawmakers to the island, which Beijing claims as its territory. Instability in the Taiwan Strait comes as Western experts warn that Beijing is accelerating a buildup of its nuclear arsenal.

Nuclear war would compound existing threats to food security. Climate change, the war in Ukraine and the coronavirus pandemic have already severely disrupted global food production. A record 345 million people around the world face food insecurity, an increase of nearly 200 million compared with pre-pandemic levels, according to the World Food Program.

In response, countries such as India and Malaysia have limited exports of wheat and chicken. The fear of global conflict — regardless of whether nuclear arms could be involved — and the food insecurity that would result could lead countries to further limit exports or hoard food supplies.

"The psychological impact can be greater than the actual damage," said William Chen, a food science professor at Singapore's Nanyang Technological University and the director of a government-affiliated food safety program.

To prepare for greater global instability, he added, countries must move away from traditional farming and diversify their food sources. Mushroom farming, indoor farming and insect protein production or microalgae foods could provide alternatives.

"These don't require as much room," Chen said. "They can be grown in your kitchen, in an underground space, and rely less on an environment exposed to nuclear war."