War? Ordinary life? In Ukraine, it depends on where you call home 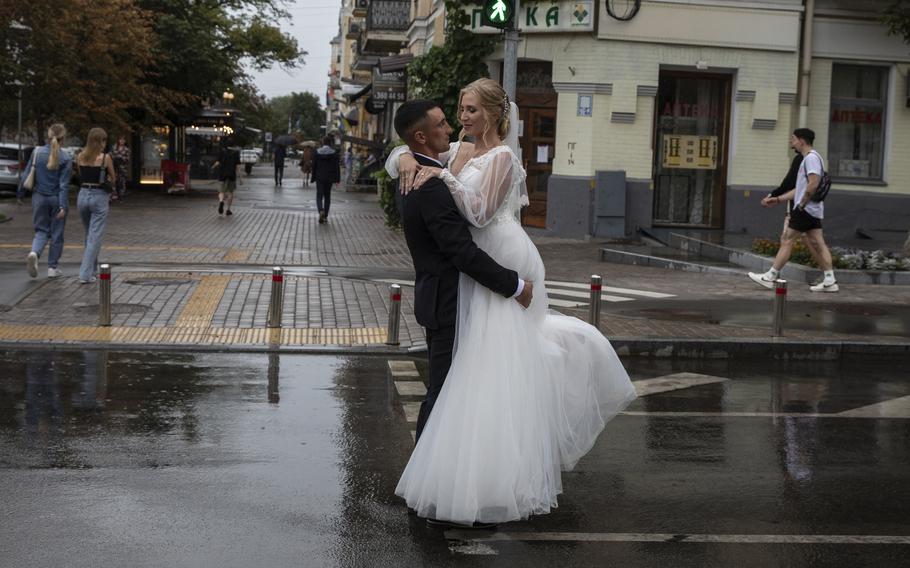 A bride and groom on a rainy day before their wedding in Kyiv, Ukraine, on July 24, 2022. (Heidi Levine/for The Washington Post)

KHARKIV, Ukraine — The two bartenders work for the same Ukrainian chain. But their lives are starkly different.

Vladyslav Nazarenko is in Kharkiv, about 30 miles from the Russian border. Here the 21-year-old can’t shake the fear of a Russian rocket or missile attack. His bar is one of the few open in the eerily quiet city, which Moscow bombarded in the spring and still strikes nightly.

Pashchenko Denys is in Kyiv, Ukraine’s bustling capital, far from the front lines. There the 22-year-old serves a constant stream of customers looking to laugh and relax — up until the city’s 11 p.m. curfew.

“The war is ongoing,” he said. “But Kyiv continues to live.”

Nearly six months after Russia invaded, many Ukrainians are living — and struggling — with these split-screen realities.

In Kyiv and much of the western part of the country, prewar life has largely returned for civilians. People eat in restaurants, drink in bars, dance and enjoy lazy summer days in parks. In the east and south, where much of the fighting has been focused, people continue to live with the terror and destruction of Russian assaults. And in many places, Ukrainians are now living under Russian occupation, the starkest possible contrast to the relative ease of life in the capital.

In Kyiv, some people interviewed said they feel guilt and grief that life can seem almost normal while so many Ukrainians are caught in the war’s widespread death, destruction and displacement. In Kharkiv, more than 300 miles east, others said they feel frustration and resignation about their brutal reality. 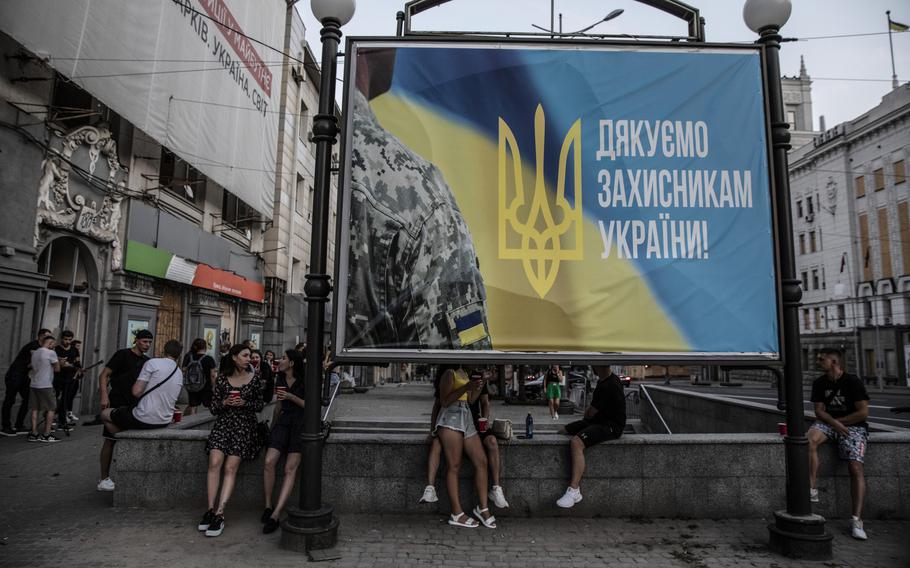 Young Ukrainians drinking outside the Piana Vyshnia, or Drunk Cherry, a Ukrainian chain specializing in sweet cherry liquor near by a giant billboard that reads " Thank you defenders of Ukraine" in the early evening in the city of Kharkiv, Ukraine, on Aug. 11, 2022. (Heidi Levine/for The Washington Post) 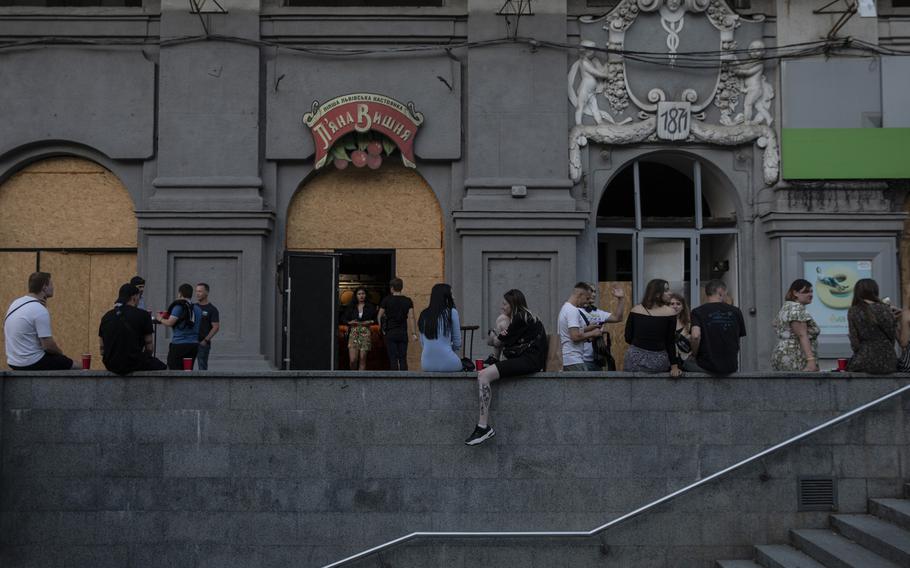 Kyiv was on the brink of falling early in the war — Russian forces tried to encircle the capital and brutalized civilian populations along the way. But the capital emerged defiant and became home to thousands of displaced Ukrainians.

Kharkiv briefly fell to Russian forces in the war’s first days: Ukraine has since controlled the city, but it emptied out as Russian bombardments devastated residential areas. The front line remains close, as do worries that Moscow could try to take Kharkiv again.

Kharkiv city authorities estimate 10% of businesses have reopened since late spring. In Kyiv, 90% of retail and 80% of service businesses have, according to the mayor’s office.

At Nazarenko’s bar in Kharkiv, most customers come alone and do not stay long in the evening; a few may stop to drink at high tables set up on the sidewalk. Sometimes Nazarenko comes to work even when he is not needed, he said with a wide smile. It helps break his isolation. 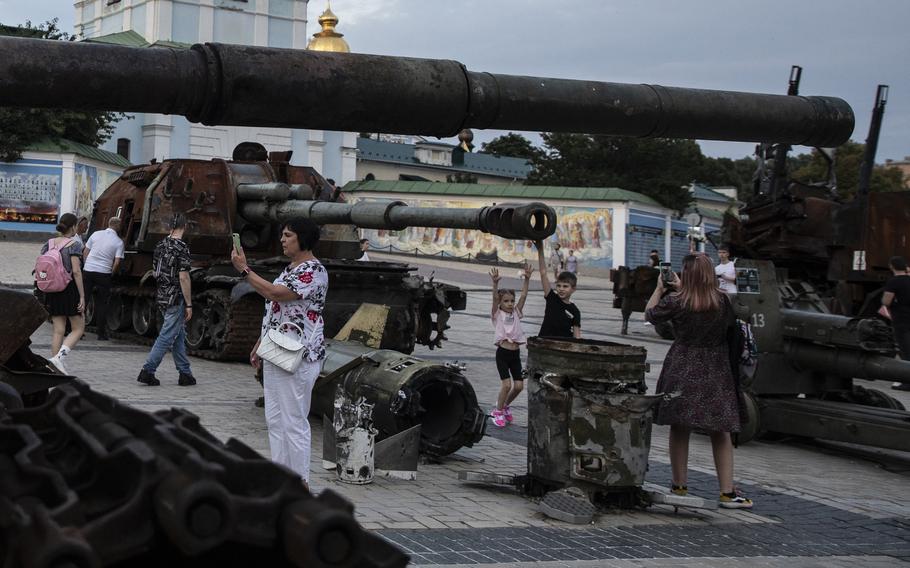 People take selfies of themselves by destroyed Russian military equipment at an open air exhibition on Mykhailivska Square in Kyiv, Ukraine, on Aug. 1, 2022. (Heidi Levine/for The Washington Post)

Customers “share their stories, how they’ve seen everything, lived in wartime and experienced it for the first time,” he said. “We will laugh about something; we will cry about something.”

Nazarenko recently visited Lviv, a city in western Ukraine largely spared from the fighting. He was heartened by all the volunteering he saw for the military and war-hit communities.

“It’s gratifying,” he said of Ukrainian unity. “It’s a shame that this happened only because of the war, but we finally figured it out.”

A few people he met, however, had spent the whole war in western Ukraine. They “don’t know what is happening here,” even after he explained, he said. He found it “offensive.”

“They don’t know what war is,” Nazarenko said.

Before the invasion, Kharkiv was a center of learning and culture. But months of nonstop Russian shelling have turned parts of the city into a ghost town — block after block of rocket-hit buildings with random chunks blown out. The typically crowded central stone square beside Kharkiv University remains deserted. 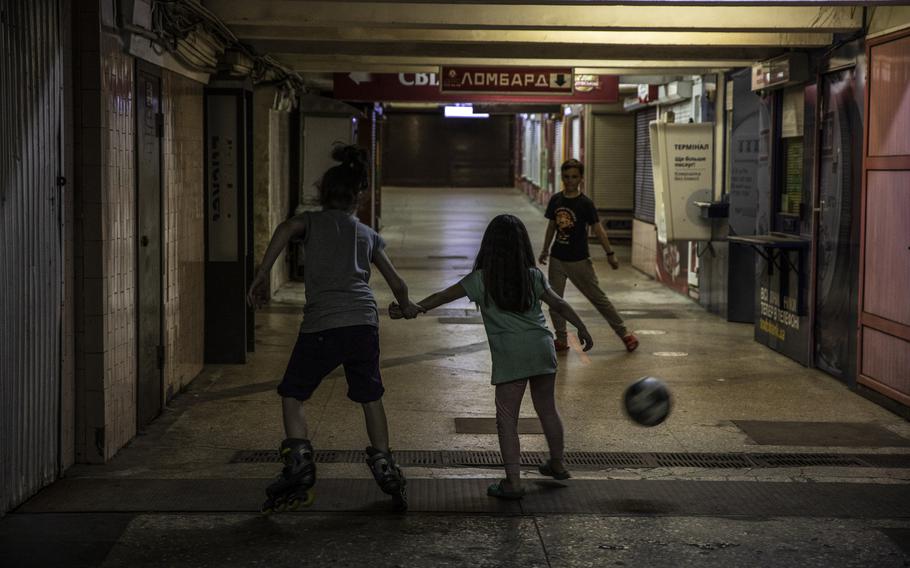 Children at play in a metro station where about 150 displaced residents are living in the Saltivka neighborhood in the city of Kharkiv, Ukraine, on Aug. 11, 2022. (Heidi Levine/for The Washington Post)

The Ukraine military pushed Russian forces back enough by late May for the city to reopen some businesses and metro lines. For months, people jammed into Kharkiv metro stations for shelter against Russian attacks. About 150 displaced residents still live in one station. Some empty businesses have been converted into volunteer centers — spaces that also provide a rare place to socialize.

Maxym Skuba, 30, is a full-time volunteer at a charity run out of a Kharkiv restaurant, where he helps cook as many as 12,000 meals a day for distribution.

“I just work, come home, eat and go to bed,” said Skuba, who ran an agriculture equipment business before he war. He wore an apron and a tired look on his round face. “It repeats every day.”

“I’m glad that they have the opportunity to drink coffee in peace,” he said. “But I want them not to forget that a war is happening here.

“If they have the opportunity to enjoy life, then let them have joy,” he added.

In Kyiv, Artem Tsybulnyk, 24, is struggling with both. 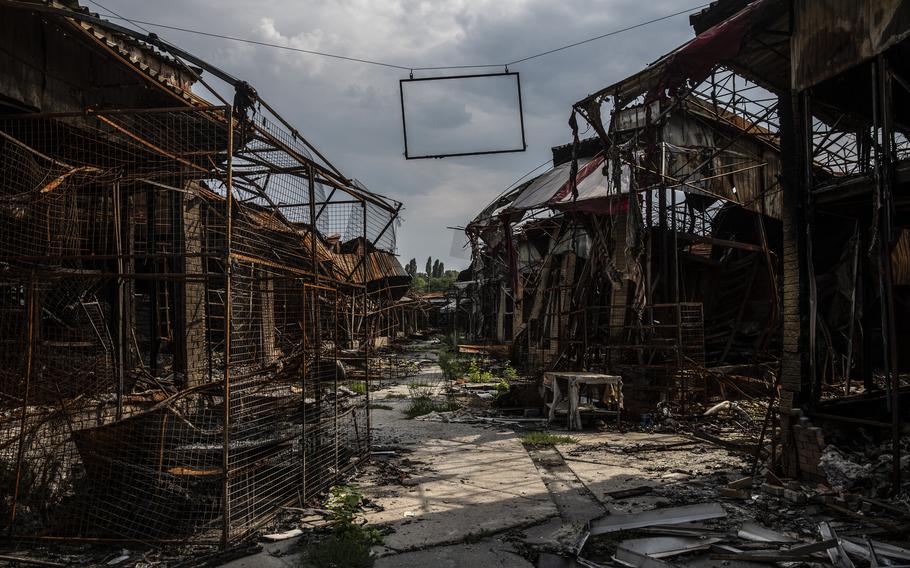 The destroyed section of the Barabashovo market area, one of the largest markets in eastern European in the city of Kharkiv, Ukraine, on Aug. 11, 2022. Part of the market was destroyed by Russian shelling earlier during the war. (Heidi Levine/for The Washington Post)

Tsybulnyk, a fantasy writer with a short beard, was out for an afternoon scooter ride with a friend. He said he will go fight for his family and friends if called up, as is required of most Ukrainian men.

In the meantime, he said, “I am just trying to live as normally as I can.”

Tsybulnyk scootered by one of Kyiv’s new popular pastimes: taking photos in front of charred and captured Russian military vehicles. The exhibition opened in late May in a large square in front of the capital’s golden-domed St. Michael’s church.

Kyiv still bears signs of wartime trauma. Sandbags, roadblocks and soldiers pepper the militarized capital. The city shuts down by curfew each night. Air raid sirens occasionally wail, though far less than early in the war, when many people lived in bomb shelters. Ukrainian flags, artwork and signs for military-focused fundraisers are everywhere.

But life goes on. DJs have started to throw daytime parties. People dance to electronic music as they repair homes in suburbs freed from Russian occupation. In a Ukrainian band’s recent music video, the country’s soldiers face bombardments and suffer injuries in scenes playing out in the streets of an otherwise typical-seeming city. 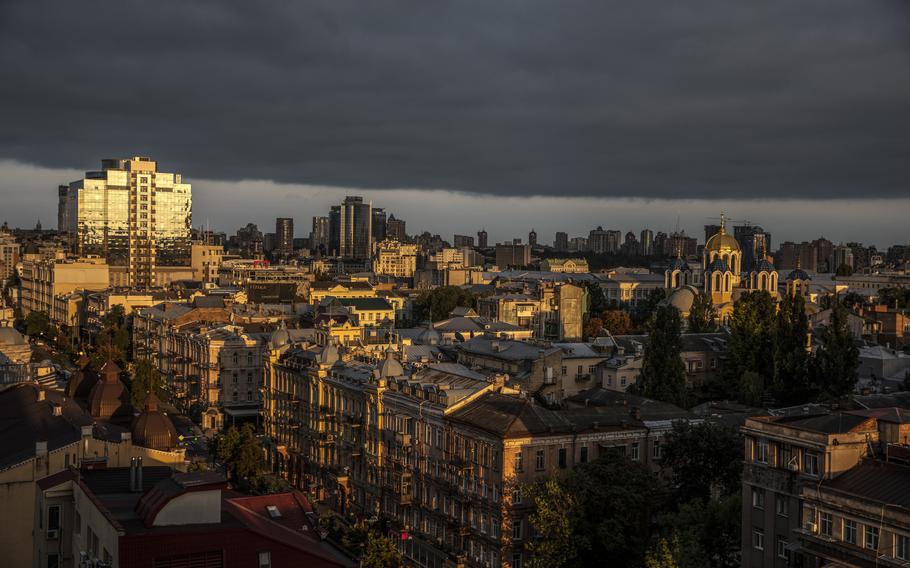 Nightfall over the city of Kyiv, Ukraine, following a rainstorm on Aug. 8, 2022. (Heidi Levine/for The Washington Post)

Denys, the bartender in Kyiv, said he felt conflicted about how much of prewar life to embrace. He considered clubbing and dancing inappropriate. “On the other hand, it’s good to distract people from what they’ve seen,” he said.

Bartending is a distraction for him, too, he said. Spending money on social outings, he argued, also helps the country.

“That’s how we support the economy, and this money can go to the Ukrainian army, or some volunteer activities, and generally help our country,” he said.

It’s one way he has to cope.

Maria Avdeeva in Kharkiv and Heidi Levine, Kostiantyn Khudov and Serhiy Morgunov in Kyiv contributed to this report.