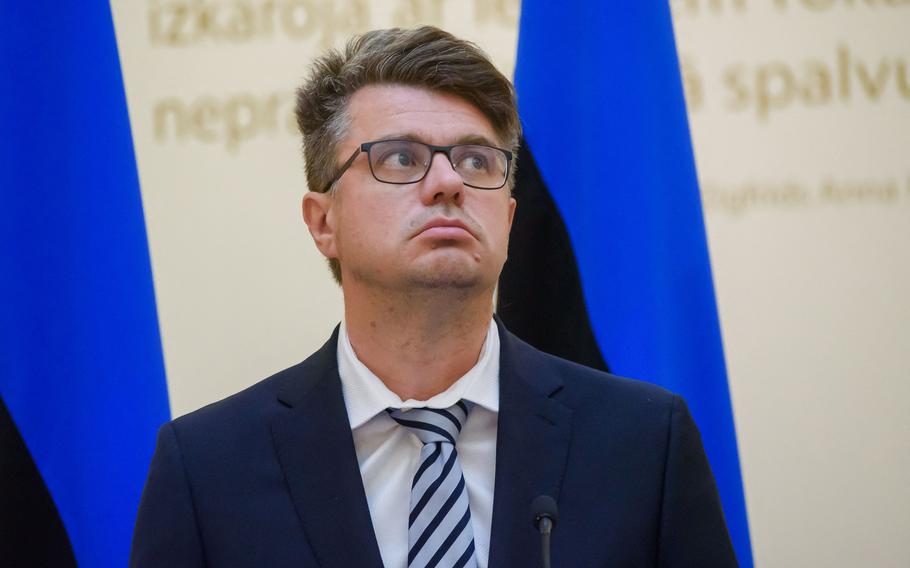 Urmas Reinsalu, Minister of Foreign Affairs of Estonia, during a news conference with his counterparts from Poland, Finland and Latvia, marking the 100th anniversary of Latvia-Russia peace treaty in Riga, Latvia, on Aug. 11, 2020. (Gints Ivuskans/AFP/Getty Images/TNS)

"It was definitely a factor that we kept in mind when making the decision. Before that, we consulted with a series of allies," Foreign Minister Urmas Reinsalu said in an interview in Paide, Estonia, on Saturday.

Reinsalu, a conservative who took office in July after Prime Minister Kaja Kallas forged a new coalition, is a fierce supporter of Ukraine. He discussed ideas for new EU sanctions against Russia with Ukrainian President Volodymyr Zelenskyy during a visit to Kyiv this month.

Estonia and Latvia this week joined Lithuania in abandoning the so-called 16+1, a loosely organized alliance formed in 2012 as a way to cooperate on infrastructure and development projects.

The two nations were seeking other members to quit as well but weren't successful, said a person familiar with the deliberations who wasn't authorized to speak publicly. Three or four other members are considering pulling out, but it's a political decision that depends on which leader is currently in power, the person said.

Critics saw the arrangement as a way for Beijing to manipulate European Union members who felt overlooked by Brussels, and to divide the bloc.

China's influence, obtained through extensive investments in infrastructure, is much later in several central and eastern European countries than in Estonia, Reinsalu said. He added that Estonia didn't stand to lose out on any benefits from the initiative.

"This step is therefore principally of political significance," he said. "The format hasn't yielded any significant practical output, and we would prefer to engage in relations with China through the EU as a single entity."

Russia's invasion of Ukraine in February has triggered a broad rethink in relations with China. But even before the war, enthusiasm for the cooperation mechanism waned as some countries bristled at widening trade balances with China — as well as at the Asian superpower's failure to deliver on pledges of billions of dollars in investments.

In what was seen as a snub to China, the three Baltic nations sent neither their presidents nor prime ministers to the more recent in-person summit, held in 2021. Lower-level officials attended instead.

Lithuania, which became embroiled in a dispute with China after allowing Taiwan to set up a representative office, pulled out of the group last year, saying the alliance wasn't delivering on its promises.