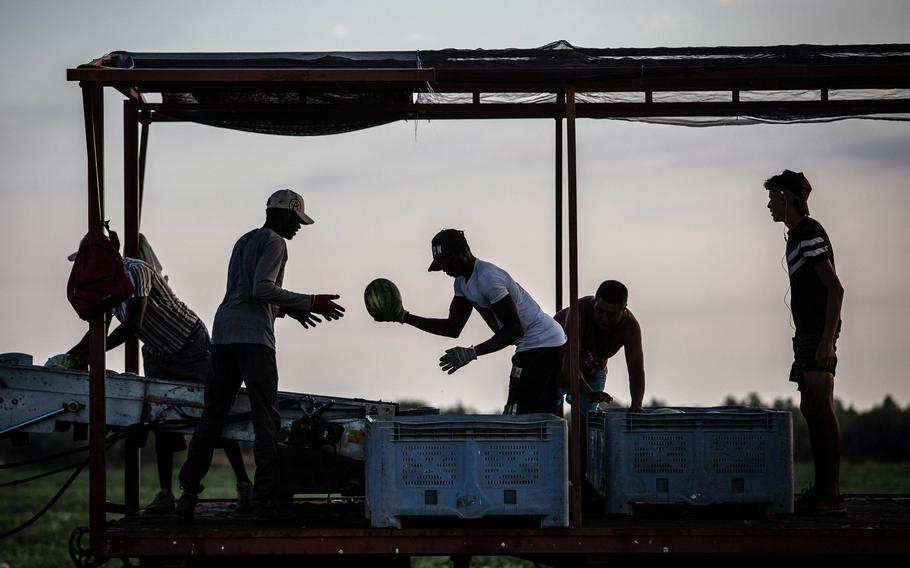 Workers sort harvested watermelons into crates on a farm in the Ulldecona district of Tarragona, Spain, on July 20, 2022. (Angel Garcia/Bloomberg)

Spain is opening its doors to foreign workers to fix labor shortages and ease a demographic slump threatening its future prosperity.

In contrast with more anti-immigrant politics in much of Europe, the government has loosened rules to allow the recruitment of employees in their countries, mostly in Latin America, for both skilled and unskilled jobs that are hard to fill.

The reform offers an accelerated path to legal status for potentially tens of thousands of people currently working in the shadow economy.

With unemployment at its lowest since 2008, Spain -- like much of western Europe -- is struggling with the sort of severe labor shortages that led to travel chaos at European airports this summer.

The euro zone's fourth-biggest economy has glaring vacancies ranging from software developers and scientists to waiters, bricklayers and baggage handlers.

While the post-pandemic rebound explains the most pressing job needs, the shortage also offers a glimpse of the deeper problems gripping industrialized economies with fewer babies, shrinking workforces, and spiraling public-finance costs to match.

"An aging population means you will have to depend more on foreign workers to help European countries maintain welfare states and pensions," Social Security and Migration Minister Jose Luis Escriva, the architect of the reform, said in an interview. "It is more of a medium-term problem, but this measure is designed with that horizon in mind."

Spain has one of the world's most rapidly aging societies. The share of its population over 65 years is now at 23%, reflecting particularly high life expectancy and low fertility rates. The number of Spaniards will shrink by a third by 2100, assuming normal immigration flows, United Nations projections show.

That may even be already happening as other countries welcome immigrants too. Germany plans a reform to allow over 130,000 foreigners to gain regular status, and Poland wants many of the 2 million Ukrainian refugees in the country to stay for good.

Other nations are more determined to keep foreigners out. Italian far-right parties calling for a crackdown on illegal migrants are leading polls ahead of next month's election.

Meanwhile France's nativist National Rally Party had its best showing ever at the ballot box in June, and the U.K. largely shut its borders to European Union citizens seeking work after its exit from the bloc.

In Spain, radical right-wing party Vox, the country's third political force, has kept largely quiet about the immigration reform. The party is often less critical of workers from Latin American countries, which were under Spanish rule for centuries.

Many opinion polls show relative tolerance to immigrants in Spain compared with other Europeans, which might be due to the relative ease that Latin Americans sharing a common language and religion have found integrating into society.

Not all foreigners are equally welcomed. Although Spain already hires farm workers directly from Morocco, the government has kept a hard-line stance against most other African immigrants.

In June, Socialist Prime Minister Pedro Sanchez defended the efforts of Moroccan and Spanish police to prevent hundreds from crossing a fence into the North African conclave of Melilla, which resulted in the death of at least 23 people.

According to Ignacio Conde-Ruiz, an economics professor at Complutense University in Madrid, Spain should open its borders faster to avoid missing out on a pool of workers that is likely to shrink in the future as fertility rates in Latin America drop too.

"More needs to be done if we want our economy to function properly and ease the strain on our pensions," he said. "It will be more difficult to bring immigrants in the future."

By far the biggest challenge to the sustainability of the pension system comes from the rising portion of elderly citizens relative to the economically active population, according to the Bank of Spain.

The irony is that the country does actually have plenty of young people seeking work despite growing labor shortages. More than 840,000 people under the age of 30 could not find a job during the first quarter.

At nearly 29%, Spain's youth unemployment rate, one of Europe's highest, reveals a mismatch between vacancies on offer and the skillset of its young workforce.

Without deeper reforms to reduce an over-reliance on basic services related to tourism, the immigration reform won't fix the labor scarcity, said Andreu Domingo, deputy head of the Barcelona-based Centre for Demographic Studies.

"These measures are a good step, but they don't address the real problem," he said. "It doesn't change an economic structure based on low productivity with low wages that will lead to a constant demand for low-skilled workers."