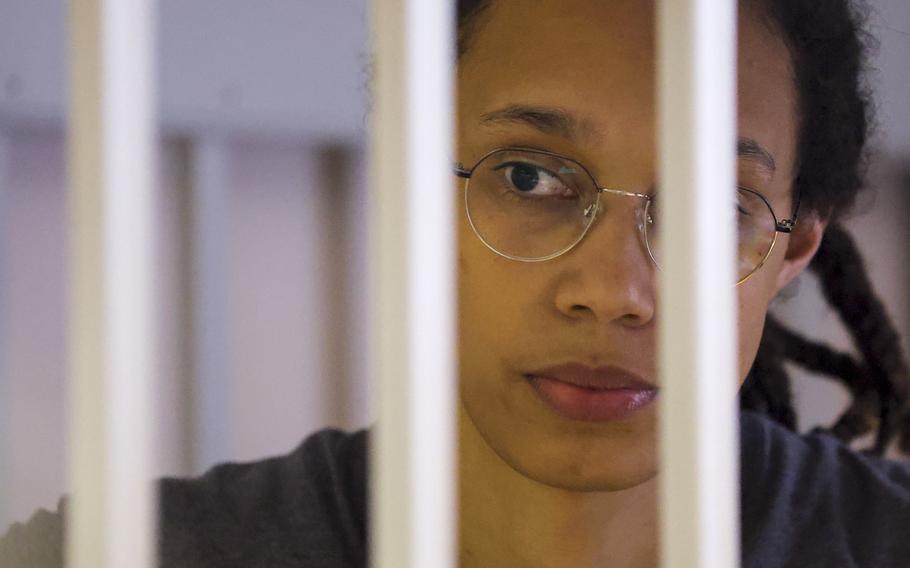 WNBA star and two-time Olympic gold medalist Brittney Griner looks through bars as she listens to the verdict standing in a cage in a courtroom in Khimki just outside Moscow, Russia, Thursday, Aug. 4, 2022. (Evgenia Novozhenina, Pool photo via AP)

RIGA, Latvia — Russia Thursday confirmed for the first time that negotiations between Washington and Moscow on a prisoner exchange were underway, after the United States proposed a deal to release WNBA star Brittney Griner and another American prisoner Paul Whelan.

The Russian Foreign Ministry confirmed negotiations were underway via a channel set up by President Joe Biden and Russian President Vladimir Putin when they met in Geneva in June last year.

“Instructions were given to authorized structures to carry out negotiations,” Nechayev said. “They are being conducted by competent authorities,” he told journalists in Moscow Thursday, state media reported.

The Biden administration has been under massive pressure to secure Griner’s release after her arrest at Moscow’s Sheremetyevo International Airport in February. She was carrying two vape cartridges with cannabis oil, containing less than a gram of the substance, banned in Russia.

Griner’s plea to the court for leniency fell on deaf ears, and she was sentenced to nine years’ prison in a Russian court last Thursday. Her legal team has announced plans to appeal.

Secretary of State Antony Blinken announced last month that officials had made a “substantial” offer for a deal to secure the release of Griner and Whelan but has not confirmed media reports that Washington offered to swap Russian arms trafficker Viktor Bout, who is serving a 25-year sentence in the United States.

After Lavrov’s comments, Blinken said that after Russia’s indication that “they are prepared to engage through channels we’ve established to do just that ... we’ll be pursuing that.” Biden said Friday that “I’m hopeful. We’re working hard.”

The State Department says that both Griner and Whelan were wrongfully detained. Biden spoke by phone to the families of Griner and Whelan last month to assure them that his administration was doing everything it could to see them freed.

Marine veteran Whelan, 52, a security consultant arrested in 2018 and convicted of spying in 2020, is serving a 16-year jail sentence. He says he was framed. He was left behind when the United States exchanged another former marine, Trevor Reed, for convicted Russian drug trafficker Konstantin Yaroshenko in April.

Another American arrested at Sheremetyevo International Airport for carrying cannabis into Russia, schoolteacher Marc Fogel, has not been classified by the State Department as wrongfully detained and does not appear to have been included in the proposed prisoner swap.

Russian officials from the Kremlin down have repeatedly warned Washington against “megaphone diplomacy,” or efforts to leverage public pressure for Griner’s release in talks, demanding they take place behind closed doors and without public comment on the detail of negotiations.

The Kremlin last week warned that any disclosures of the process could “thwart the entire procedure.”

“The Americans have made this mistake,” Kremlin spokesman Dmitry Peskov said Friday. “They have decided for some reason to solve these problems by the megaphone method,” he said. “This is not how they are solved.”

Nechayev reiterated that message in his comments Thursday: “We call on the U.S. authorities not to speculate on sensitive matters that affect the fate of specific people, while at the same time abandoning futile attempts to put pressure on us, and we call on them to focus on practical work through established channels.”