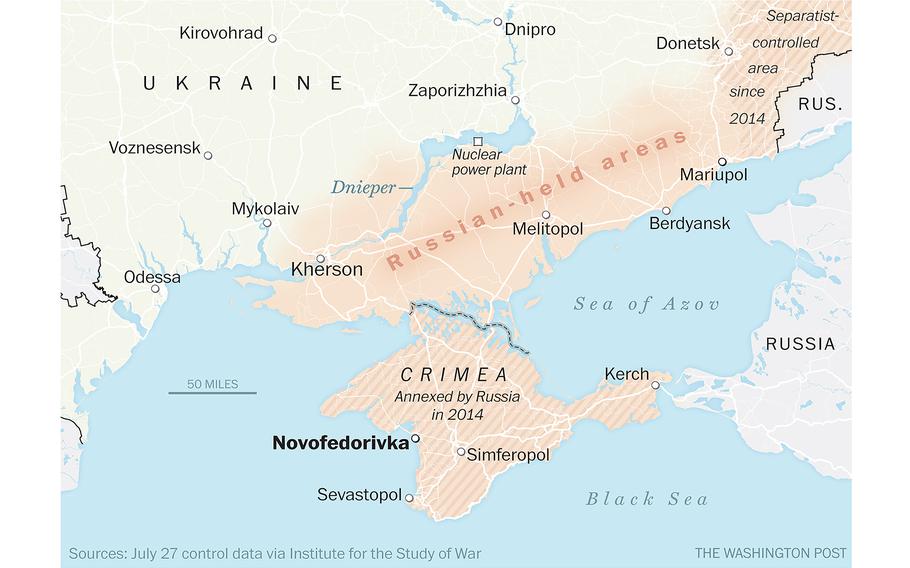 An official in Ukraine said Wednesday, Aug. 10, 2022, that Ukrainian special forces were behind an attack on a Russian air base in Crimea. ()

KYIV, Ukraine - A powerful attack on a Russian air base in occupied Crimea was the work of Ukrainian special forces, a Ukrainian government official told The Washington Post on Wednesday, suggesting an increasingly important role for covert forces operating deep behind enemy lines as the country expands efforts to expel Russian troops.

The official, who spoke on the condition of anonymity because they were not authorized to speak publicly on the matter, did not disclose details of how Tuesday's attack was carried out. The attack marks a significant escalation in the nearly six-month-old war, demonstrating a new ability by Ukrainian forces to carry out attacks further behind the front lines than had previously been thought possible.

At least three explosions rocked the Saki air base Tuesday, in a coastal area of the Crimean Peninsula, which was annexed by Moscow in 2014 and is a popular vacation destination for Russians.

The Ukrainian air force said in a statement Wednesday that nine Russian military planes were destroyed at the base, which the authorities have said was used by Russia to launch missile strikes against Ukrainian-controlled territory.

If confirmed, the losses would be the biggest in a single day for the Russian air force since the start of the war, and could further curtail Russia's capacity to carry out missile strikes against Ukrainian cities, at least in the short term. Russia's air force has struggled to mount airborne operations throughout the war, and most of its strikes are launched from planes and ships comfortably out of reach of Ukrainian air defenses in Russia or Russian-occupied territory.

The attack could also have a profound impact on Russia's long-term ability to maintain its control over southern Ukraine, and especially the nearby province of Kherson, where Ukrainian forces are hoping to launch a counteroffensive to reclaim territory. Crimea has emerged as a key logistics hub for Russian operations in the south, the main transit point for troops, equipment and ammunition reinforcing and supplying the Kherson area.

If Crimea is now in play and the peninsula is vulnerable to further attack, Russia will have to guard a part of Ukraine where it had assumed it could operate unimpeded. And that could hamper its ability to reinforce and supply its troops in the south, said Andriy Zagorodnyuk, a former Ukrainian defense minister who is now chairman of Ukraine's Center for Defense Strategies, an independent think tank.

Officially, Kyiv has refused to confirm or deny that Ukrainians were involved. But on Tuesday, Ukrainian President Volodymyr Zelenskyy focused his nightly address on Crimea, promising to win back the territory. "Crimea is Ukrainian, and we will never give it up," he said, without mentioning the air base or the attack.

Exactly what caused the explosions at the base remains a source of speculation and Ukraine, if it were responsible, might never officially disclose its methods. Russian officials have said the first known strike against Crimea a little less than two weeks ago, against the Russian naval base at Sevastopol, was carried out by a drone. Some military experts suspect Tuesday's attack may also have been carried out by some form of drone, perhaps operated by covert forces hidden nearby.

Another possibility is that explosives were planted by saboteurs at key points in the facility, experts say. A missile could have caused the damage, but there has been no evidence of any missile impact and Ukraine is not known to have ready access to missiles with that kind of range.

Hints from Ukrainian officials that special operations forces may have been involved have put a spotlight on the activities of what is officially known as the National Resistance, and which many Ukrainians refer to as "partisans."

Led by Ukraine's special operations forces and under the overall command of the Ukrainian army, the shadowy force made up of trained infiltrators and local sympathizers has been stepping up activities aimed at disrupting Russia's logistics, administration, and command and control, according to Oleksiy Danilov, secretary of Ukraine's National Security and Defense Council.

The force is secret and details of its operations can't be disclosed, he said in an interview.

"If you ask me if there are partisans, I will answer: There are. They are everywhere. We prepared in advance and we have them," he said. "What they are doing is another matter. It depends on what tasks and when they will be received. And there is and will be resistance."

The resistance fighters could play an important role in complementing the conventional capabilities of Ukraine's armed forces, which remain heavily outgunned on the battlefield despite the arrival of Western weapons systems, Zagorodnyuk said.

"They are supposed to be nonpublic, but we know this movement exists and is very active," he said. "They can supplement Ukrainian conventional capabilities."

Guerrilla activity has been especially prevalent in the southern Kherson region, just north of Crimea. In June, a Russian-installed official in Kherson was killed in a mysterious bomb blast on his way to work, one of a number of assassinations attributed to the resistance. Posters around the city made by Ukrainian resistance groups have warned those working with the Russians that partisans would come for them too, according to images posted on social media.

One flier read, "If a HIMARS can't reach, a partisan will help," a reference to the U.S.-supplied High Mobility Artillery Rocket Systems that have given the Ukrainians the ability to strike up to 50 miles behind Russian lines.

The Saki air base is located over 140 miles from the nearest front line and U.S. officials have told The Post that no U.S. weapons were used in the attack, ruling out the possibility that HIMARS were responsible for Tuesday's strike. But resistance operatives have played a role in helping locate key targets such as ammunition depots and command and control posts and providing coordinates for HIMARS teams to target, Ukrainian officials said.

Russia said Tuesday's blast was caused by an ammunition explosion, and officials reported that at least one person was killed and 13 were injured, including two children.

The Post could not independently verify the claims from either side.

Suliman reported from London. David L. Stern and Serhiy Morgunov in Kyiv contributed to this report.