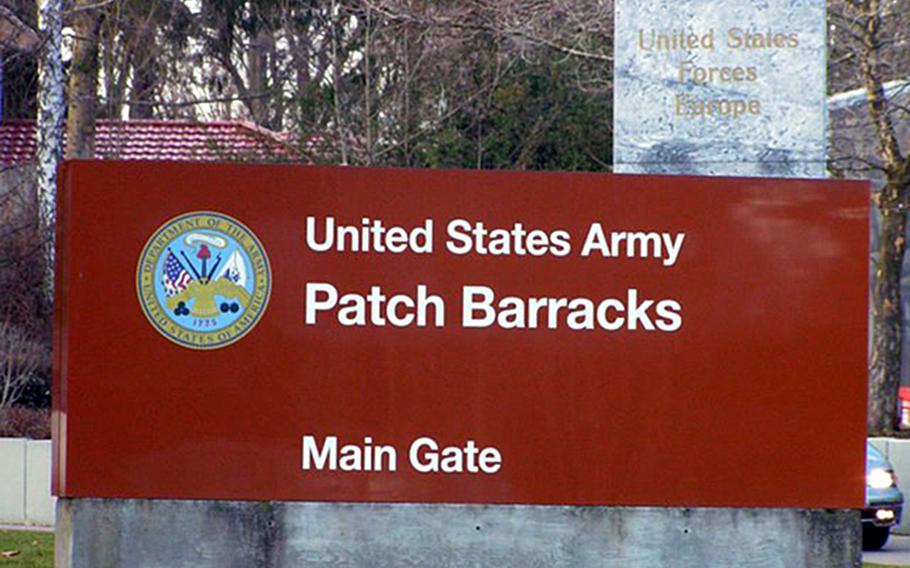 A sex tape involving a soldier and civilian working within the military community in Stuttgart sparked multiple investigations into the sharing of explicit images. (Stuttgart Army garrison)

STUTTGART, Germany — A sex tape scandal involving a U.S. Army civilian, a soldier and an Air Force reservist is sparking criticisms of unequal consequences for sharing explicit images without a person’s consent.

“Everyone kind of brushed it off. I believe more action should have been taken,” said a Stuttgart-based male soldier who filed a criminal complaint accusing a female Army civilian of sharing their sex recording at a social gathering.

The case involves an October 2020 video between the soldier and civilian, which resulted in two separate military law enforcement probes after allegations emerged that the recordings were passed around, those involved told Stars and Stripes.

While one of the cases resulted in a career-altering reprimand for the Air Force reservist, the Army civilian remains in her Stuttgart job after German prosecutors declined to pursue the allegations referred to them by their U.S. military counterparts.

The cases center on possible violations of the Uniform Code of Military Justice dealing with wrongful distribution of intimate images. But in instances involving both service members and military civilians, different jurisdictions come into play.

The soldier said he learned of the incident after hearing from a friend about an off-base gathering at which attendees were shown the video.

“I felt embarrassed and confused, and I feel like this person should not still be in her position,” said the soldier, who requested anonymity as a victim in the nearly two-year-old case, which is still being dealt with at the administrative level.

Air Force Senior Master Sgt. Tanja May said the controversy started when she discovered a cache of explicit videos of her boyfriend, the Stuttgart soldier, and the Army civilian during a visit to her boyfriend’s house.

May said that when she confronted him, the soldier physically assaulted her and pushed her down a staircase, an act that she said resulted in an Army reprimand for the soldier.

May took one of the videos of him and the civilian engaged in sex and shared it in a chat group consisting of all three of them and about three others.

That prompted the Army civilian to file a complaint against May for sharing the images without her consent. May was issued a nonjudicial reprimand, which she said she is appealing.

Although May acknowledges that her actions were wrong, she said the military didn’t account for her state of mind after the incident.

May also contends that because the video at issue was later passed around by the civilian at a public gathering, the latter’s claims of victimhood are moot.

The soldier, who filed the complaint against the civilian in March 2021, said his case received minimal investigation.

A redacted Stuttgart Criminal Investigation Division report sparked by the soldier’s complaint states that “witnesses confirmed” that the civilian showed the video at a social gathering.

Military investigators interviewed witnesses, who said a video “depicted her and an identifiable male engaged in sexual acts,” the CID report states.

Witnesses also confirmed that during the gathering, the civilian identified the soldier by name as the person in the video, according to the CID report, which was obtained by Stars and Stripes. The report said the civilian declined to provide a statement to the CID.

When contacted by Stars and Stripes, the civilian denied sharing the tape and said she had been cleared of wrongdoing by German prosecutors, who received the case from military authorities. She also said she was the initial victim in the case.

“This entire situation was started because (May) shared that video with multiple people,” the civilian said. “I am being retraumatized over and over again because of this.”

However, it doesn’t appear that the German prosecutor’s office in Stuttgart ever conducted its own investigation.

In a statement Tuesday to Stars and Stripes, the office said that the case was terminated in August 2021 because of an unspecified “procedural obstacle” and that there was no German public interest in pursuing the case involving two Americans.

The soldier said he was never interviewed or even contacted by German authorities.

“I feel often times in situations like this, if it’s a guy who is the victim, these things get blown off,” he said.

May, meanwhile, said she’s faced extensive career damage because of the events.

“I continue to be denied civilian hiring opportunities despite being more than qualified to do so. I have not been allowed to perform reserve duty since November 2020,” she said.

But the civilian, she said, “continues to be shielded and protected by those within her organization and has not faced justice for committing the same act I’m being punished for.”

May, who is Black, said the disparities in punishment lead her to believe that the differences come down to race and that the civilian is “enjoying the protection of her skin.”

“I see no other way of painting this picture,” May said.

Military officials in Stuttgart said the matter was thoroughly investigated, but that they will conduct another review.

“The civilian’s command is aware of this matter and that it was twice investigated by Army Criminal Investigations Division and was criminally dismissed by German law enforcement,” a Stuttgart military official said in a statement. “The command is conducting a full review of the matter to determine if the prior investigations were in any way incomplete. DoD policy is to not comment on ongoing reviews.”