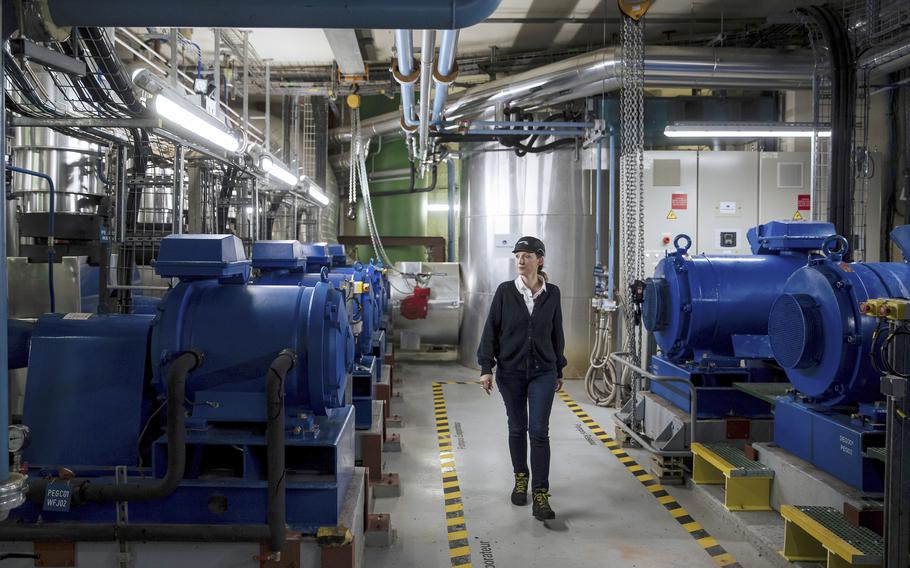 Maggie Schelfhaut, communication manager of Fraicheur de Paris, walks through one of the company's underground cooling sites during a visit in Paris, Tuesday, July 26, 2022. (Lewis Joly/AP)

PARIS — The Mona Lisa may maintain her famously enigmatic smile because she benefits from one of Paris' best-kept secrets: An underground cooling system that's helped the Louvre cope with the sweltering heat that has broken temperature records across Europe.

The little-known "urban cold" network snakes unsuspecting beneath Parisians' feet at a depth of up to 98 feet, pumping out icy water through 55 miles of labyrinthine pipes, which is used to chill the air in over 700 sites. The system, which uses electricity generated by renewable sources, is the largest in Europe — and chugs on around the clock with a deafening noise totally inaudible above ground.

Paris City Hall has now signed an ambitious contract to triple the size of the network by 2042 to 157 miles. It would make it the largest urban cooling system in the world. The new contract intends to help the city to both adapt to and combat the threat of global warming. Many parts of Europe hit 104 Fahrenheit in July.

The city is extending the cooling network to hospitals, schools and metro stations over the next two decades. It's unclear how much of the system will be operational by the time of the Paris Olympics in 2024, but it's possible the systems will be used in several Olympic sites.

Unbeknown to millions of tourists, the piping currently cools the City of Light's most emblematic sites, such as the Louvre and the Quai Branly Museum. It might even help cool the tempers of agitated lawmakers as it is used to drop temperatures in the National Assembly.

The scheme is operated by the joint-venture company Fraicheur de Paris — 85% owned by the state's French energy company EDF and the rest by public transport operator RATP. The company's officials tout its benefits for the entire French capital.

"If all (Parisian) buildings get equipped with autonomous installations (such as air-conditioning), it will gradually create a very significant urban 'heat island' effect," said Maggie Schelfhaut of Fraicheur de Paris, referring to the increased heat in cities due to less vegetation, which cools, and more urban infrastructure, which absorbs the sun's rays.

But Schelfhaut said that the pipe network could make the whole of Paris 1.8 Fahrenheit degrees cooler than if autonomous installations were put up across the city.

"One degree less in the city center is a lot," she added.

Three of the 10 high-tech cooling sites lie on the Seine river and are accessed by a retractable spiral staircase barely visible from street level — in something resembling the lair of the "Teenage Mutant Ninja Turtles."

When the Seine's water is cold enough, a machine captures it and uses it to chill the system's water. The heat created as a byproduct is sent back into the Seine where it is absorbed. The chilled water is then pumped though the system's pipes to its 730 Parisian clients.

Paris' cooling sites all use renewable energy sources such as wind turbines and solar panels. Four new solar energy sites which will feed into this network are also earmarked for construction. French officials see this energy independence as particularly important given the threat of Russia cutting off energy supplies to Europe. A woman observes paintings inside the Louvre Museum in Paris, Tuesday, July 26, 2022. The museum benefits from one of Paris' best-kept secrets, an underground cooling system that's helped the Louvre cope with the sweltering heat that has broken temperature records across Europe. (Lewis Joly/AP)

Russian energy corporation Gazprom on Wednesday cut the amount of natural gas flowing through a major pipeline from Russia to Europe to 20% of its capacity. European nations are rushing to find alternatives amid fears that Russia could completely cut off gas exports — which are used for industry, to generate electricity and to cool homes — to try to gain political leverage over the bloc.

The merits of using a cooling system which uses renewable energy to operate are already being felt by sites that use them. The world's most visited museum, the Louvre, has benefited from the network since the 1990s — with officials proud of its ecological, economic and art conservation advantages.

"It allows us to benefit from energy with a lower carbon footprint available all year round," said Laurent Le Guedart, the Louvre's Heritage Director. "The particularity of the Louvre Museum is that it needs to use iced-cold water to correctly conserve the artwork and to control the humidity."

The Louvre does not use air conditioning and officials say the cooling also wins them much needed floor space in the sprawling, yet cramped, former palace that is home to 550,000 artworks.

Le Guedart said that the system is a money-saver given the rising cost of energy linked to the Ukraine conflict. It operates notably in the State Room of the Pavillon Denon where the Mona Lisa lives. Perhaps it's why beads of sweat have never trickled down the brow painted by Leonardo da Vinci.

"The energy bill of the Louvre is around 10 million euros per year in 2021. We are trying to control this bill as much as possible, amid the evident fluctuations and increases to energy costs," Le Guedart said.

The system could save it millions by cushioning the shock as Russia continues to roil the energy market.