US moves to slash long waits for Ukrainians, other newcomers who want permission to work 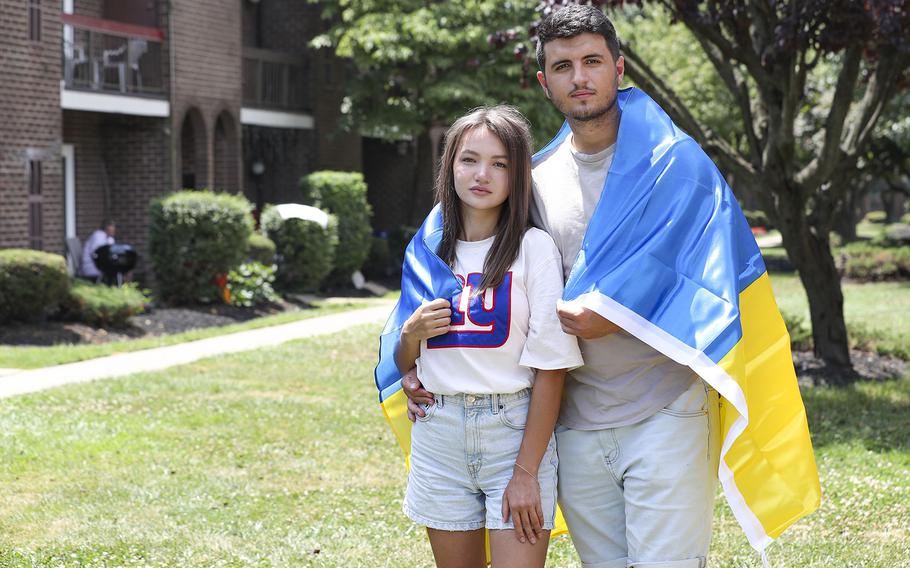 Valentyn Khimchuk and his girlfriend, Roksolana Tokarevych, left, both 21, outside the home of an uncle in Northeast Philadelphia. Khimchuk and Tokarevych arrived in the U.S. from Ukraine on July 8, 2022. Six days later they applied for work permits. (Heather Khalifa/The Philadelphia Inquirer/TNS)

PHILADELPHIA — The federal government has issued a six-paragraph notice that portends a potentially huge improvement for Ukrainians fleeing to this country — cutting their wait for work permits by months.

Instead of the current eight- to 10-month delay, which has left newcomers struggling to pay for food and housing, and strained their relationships with relatives who never imagined hosting long-term dependents, the wait could drop to as short as three months, according to people familiar with the change, announced on Thursday.

The national non-profit Welcome.US, created to welcome Afghans amid the war-end evacuation last August and recently expanded to include Ukrainians, told members and partners in an email that work applications could be approved in as little as six weeks.

A success? "A big one," said Olha Khomyak, a New York immigration attorney who helps lead a Ukraine Immigration Task Force focused on the issue. "It's much better, a month or two months, compared to six or nine months. That's a big difference. They can provide for themselves."

The inability to work has made it impossible for newcomers to send money to help their families in the war zone. It's also kept workers away from employers who are desperate to hire, and deprived local, state, and federal governments of tax revenue.

"It's very good news," said Valentyn Khimchuk, who came here from Ukraine with his girlfriend, Roksolana Tokarevych, both 21. They arrived in the U.S. on July 8, moving into the home of an uncle in Northeast Philadelphia, and six days later applied for work permits. "I hope they can proceed with this as fast as they can."

U.S. Citizenship and Immigration Services, the federal agency that processes work-permit applications, made no mention of reduced wait times in its announcement. Instead, the agency simply said it was "employing technological solutions and efficiencies to reduce processing times."

Basically, the agency will allow people who are admitted into the United States under a certain category to file for employment authorization online. Until now, the thousands and thousands of Afghans and Ukrainians entering the United States have had to file those requests on paper, by mail.

"I am thrilled to hear that USCIS has responded to this huge crisis, not only to help so many Ukrainians, who are struggling because they can't work, but also many of our neighbors who recently arrived from Afghanistan, Cuba, and Haiti — who also deserve the ability to support themselves and their families," said Anne Smith, an immigration attorney in Washington who serves as task force policy director.

USCIS spokespeople could not immediately be reached for comment.

Many people refer to the Afghans evacuated to the United States under Operations Allies Welcome, and to the Ukrainians coming here now under programs like Uniting for Ukraine, as "refugees," but that is incorrect.

The vast majority entered and continue to enter under what is called "humanitarian parole," which is permission to come here, not a legal immigration status. More specifically, in these cases, the newcomers are classified as urgent or "public-interest parolees" — basically, people who cannot go back or may never be able to go back to their homelands.

While the vast majority are currently Afghans and Ukrainians, everyone who fits the category will be able to apply on-line. The change will benefit Cubans, Haitians and others coming to the United States under humanitarian parole.

"We were excited to see the announcement," said Kit Taintor, vice president of policy and practice at Welcome.US. "And we're really excited that this change applies to a larger set of people."

To file, applicants must visit my.uscis.gov to create a free online account.

A faster approval process promises to make a big difference for people like Liliia Kravtsova, who fled the Ukrainian seaport city of Odesa. She lives with an aunt, uncle, and cousin in Huntingdon Valley, but has not been allowed to work.

"People are forced to look for illegal work," Kravtsova, 28, recently told The Inquirer, "and face many risks."

It costs $410 to apply for a work permit, which is expensive, immigration attorneys note, and can become exorbitant if families apply for two or three members. Applicants seeking a fee waiver must continue to file by mail.

USCIS, like other federal immigration agencies, faces enormous backlogs. More than 1.5 million work-permit applications were pending at the end of 2021, according to the agency.

The pandemic worsened already-existing delays when USCIS halted in-person operations and appointments in March 2020. Even when the agency reopened, not all services fully resumed. Thousands of appointments needed to be rescheduled, and in the meantime applications continued to arrive.

The United States evacuated and continues to resettle about 76,000 Afghan war allies. The Biden administration currently offers the opportunity for haven to about 180,000 Ukrainians, a big number in terms of recent immigration to this country, and barely a ripple among the 9.9 million who have fled a war that's provoked the largest humanitarian crisis in Europe since World War II.

From March to June, more than 71,000 Ukrainians arrived in the U.S., and last month another 23,000 had been approved to travel.

Few arrivals have received permission to work at a time when the U.S. has 11.3 million job openings and 5.9 million unemployed, nearly double the number of available jobs than people to fill them.