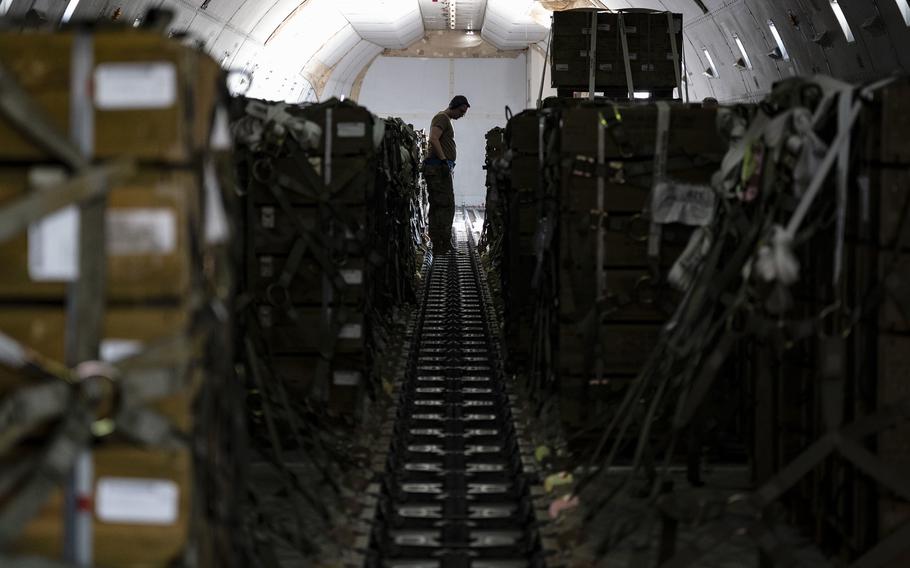 KYIV, Ukraine - Dozens of Ukrainian prisoners of war from the famed Azov Regiment were killed Friday in a strike against their detention center in the eastern Russian-occupied region of Donbas, but it was unclear how the attack happened or who carried it out.

At least 53 POWS were killed and 75 injured in the strike, according to Darya Morozova, an official for the Donetsk People’s Republic, the pro-Russian breakaway region where the prison was located.

Ukraine and Russia traded blame for the strike, with each saying the other had carried it out to silence the prisoners. All or most of the POWs were members of the Azov Regiment who had surrendered when Russian troops captured the city of Mariupol in May after a two-month siege. Their fate had been the focus of fraught prisoner-exchange negotiations between Moscow and Kyiv.

Russia’s Defense Ministry accused Ukraine of carrying out the attack using U.S.-supplied HIMARS - High Mobility Artillery Rocket System - launchers, which are helping shift the tide of the war in Ukraine’s favor. The ministry framed the incident as “a bloody provocation” intended to discourage Ukrainian soldiers from surrendering.

Russian media commentators suggested that Ukraine hit the detention center to stop the prisoners from providing testimony to interrogators about war crimes committed by Ukrainian forces.

Ukraine denied any involvement and accused Russian forces of carrying out the attack, which it called a war crime.

Ukraine did not conduct any shelling or artillery strikes Friday in the vicinity of Olenivka, the town where the detention center was located, the General Staff of the Armed Forces of Ukraine said in a post on its Facebook page.

Rather, the General Staff said, it was Russia that staged the attack and used it “to accuse Ukraine of committing war crimes as well as to cover up the torture and execution of prisoners.”

Ukrainian Foreign Minister Dmytro Kuleba, in a posting on his Twitter account, called on the world to condemn what he called a “petrifying war crime” and a “brutal violation of international humanitarian law.”

Ukrainian officials also questioned whether the incident had been caused by an artillery strike at all. Oleksiy Arestovych, an adviser to Ukrainian President Volodymyr Zelensky, tweeted that explosives specialists who had examined images of the burned-out detention center believe that the destruction may have been caused by an explosion or fire “inside the building itself, rather than the result of shelling.”

Videos of the aftermath of the blast broadcast by Russian media outlets show a tangle of twisted, burned metal bunks inside a blackened warehouse-like structure with a large hole in its roof. Charred bodies and body parts are strewn around the wreckage.

Russian media outlets posted photos showing what they claimed were fragments of HIMARS rockets found at the scene. It wasn’t immediately possible to verify that the shards had been fired by HIMARS launchers. Analysts also said there have been enough HIMARS attacks in recent weeks that the fragments could have been gathered elsewhere.

Also unclear was whether any Russians or prison staff members had died in the attack. Russia’s Defense Ministry said eight members of the staff were injured, but Morozova, the Donetsk official, said in a video interview that no Russians or local staff members were hurt.

“Happily, the workers of the place of internment did not suffer. They find themselves in good condition. Only the prisoners suffered,” she said.

The Azov Regiment vowed revenge. Writing on his Telegram channel, Azov founder Andriy Biletsky pledged to hunt down those responsible. “No matter where you hide, you will be found and exterminated,” he said.

The Azov Regiment is among Ukraine’s most battle-hardened military units but has attracted controversy over its links to far-right nationalist ideology. Russian President Vladimir Putin has framed his invasion of Ukraine as an attempt to “de-Nazify” the country, partly referring to the Azov forces.

Ukraine did not need to use HIMARS launchers to attack a site less than six miles from the front lines, said Yuriy Sak, an adviser to Ukraine’s defense minister. The high-precision weapon systems, of which Ukraine has only 12, are being reserved for their long-range capabilities, he said.

Sak said the Russians could have killed the prisoners for a simple reason: “They hate them and they want them dead.”

Walker reported from London. The Washington Post’s Robyn Dixon and Mary Ilyushina in Riga, Latvia, contributed to this report.