Christopher Meyer, British envoy to US amid buildup to Iraq War, dies at 78 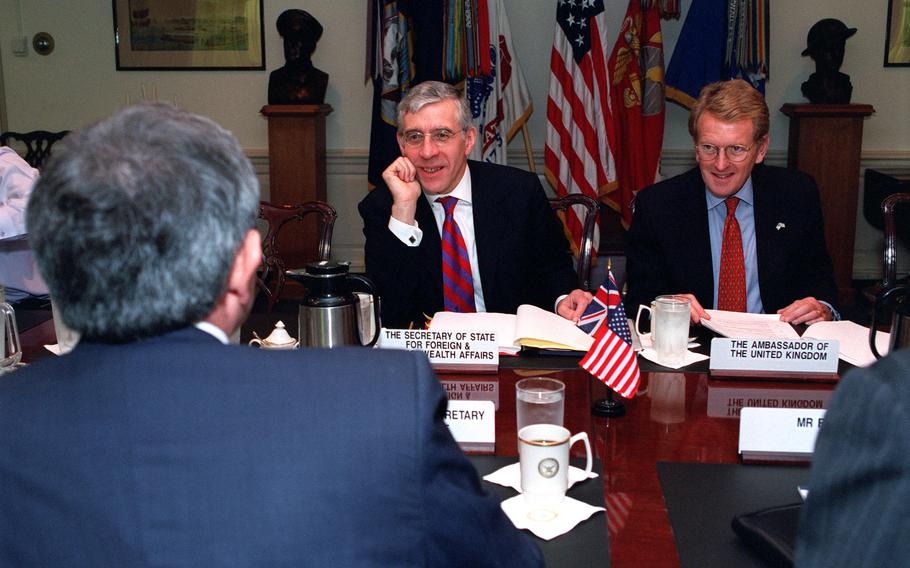 United Kingdom’s former Ambassador to the U.S. Christopher Meyer (right) met with former Secretary of State for Foreign and Commonwealth Affairs Jack Straw and former Deputy Secretary of Defense Paul Wolfowitz for a discussion on Oct. 24, 2001 at the Pentagon. Meyer, who as ambassador to the United States served as go-between for Prime Minister Tony Blair and the George W. Bush administration after the 9/11 attacks and the run-up to the Iraq War in 2003, died July 27 at age 78. (Wikimedia Commons)

Christopher Meyer, a British diplomat who as ambassador to the United States served as go-between for Prime Minister Tony Blair and the George W. Bush administration after the 9/11 attacks and the run-up to the Iraq War in 2003, died July 27 at age 78.

His death was confirmed in a tweet by the British ambassador to the United States, Karen Pierce, but no cause was given in official British statements. British media reported Mr. Meyer suffered a stroke at a vacation home in Megeve, France.

On Sept. 11, 2001, Mr. Meyer was having breakfast at the British Embassy in Washington with his former boss, ex-British prime minister John Major. They were discussing Mr. Meyer’s chat the previous evening with national security adviser Condoleezza Rice about challenges for the West in the Middle East and elsewhere.

Then Mr. Meyer and Major learned about the first plane hitting the World Trade Center and watched the rest unfold under lockdown-level security. “That world we were talking about before bore no resemblance to what we were confronted with the following morning,” Mr. Meyer later told the Daily Telegraph.

“They were hairy days,” added Mr. Meyer, who began his tenure in Washington in late 1997 during President Bill Clinton’s administration. “It was a very emotional time. I felt choked.”

For the next 18 months, Mr. Meyer was in the thick of a transatlantic war council between Blair’s government and the Bush administration as Britain became the main U.S. partner in the post-9/11 invasion of Afghanistan and the buildup to the war in Iraq. Blair broke with many European leaders to support U.S.-led contentions — contradicting U.N. arms inspectors — that Saddam Hussein was developing weapons of mass destruction.

Britain in 2002 issued its own intelligence report reinforcing the Bush administration line that Iraq appeared to have biological and chemical weapons that could be deployed in as little as 45 minutes. The claims over Iraq’s weapons program were proven false after the invasion, which touched off years of warfare, civil conflict and regional instability that claimed at least 150,000 lives, according to groups monitoring war casualties.

Mr. Meyer underwent emergency heart surgery just before U.S.-led forces moved into Iraq in March 2003 and did not return as ambassador. He later cast himself as a skeptic of the claims about Iraq’s arsenal and said he privately advocated to slow the march to war. But the growing bonds between Blair and Bush proved to be a “great accelerator,” he told the Telegraph in 2003.

“My presence in Washington wouldn’t have made the blindest bit of difference,” he said. “In my experience of the first Gulf War and of Kosovo and the Afghanistan war, when war starts, diplomacy takes a back seat.”

Mr. Meyer cut a glamorous swath through the often-staid corridors of international diplomacy. He was an artful storyteller, favored red (and sometimes green) socks, played tennis with Rice, and loved to throw lavish bashes with his multilingual wife Catherine. Their friends included Hollywood power couple Catherine Zeta-Jones and Michael Douglas.

“The cool kids are moving away,” The Washington Post wrote about the Meyers’ farewell party in early 2003.

After leaving the diplomatic corps soon after, he still had more to say. His 2005 book “DC Confidential” was full of name-dropping asides — about camping with former secretary of state Henry Kissinger and white-water rafting with Defense Secretary Donald H. Rumsfeld — but was unsparing with some British officials. Blair, he wrote, was “seduced” by U.S. power, and many of Blair’s envoys were political “pygmies” who failed to impress American counterparts.

Christopher John Rome Meyer was born in Beaconsfield, northwest of London, on Feb. 22, 1944. Weeks earlier, his father, a Royal Air Force flight lieutenant, was lost on a World War II mission over the Aegean. His mother rejoined the war effort, and Mr. Meyer was sent north to Leicester to live with his grandmother, seeing his mother on weekends.

Mr. Meyer joined the British Foreign Office a year after completing a history degree from the University of Cambridge in 1965. Postings in Europe and back in London followed, including Soviet Union analysis at the Foreign Office and serving as spokesman for Foreign Secretary Geoffrey Howe from 1984 to 1988.

Mr. Meyer was in the United States for six years until 1994, on a one-year sabbatical at Harvard University and then in various envoy roles including handling trade policy. He left diplomacy in 1994 to become spokesman for Major’s Conservative government from 1994 to 1996.

He was given the ambassador post to the United States — one of the crown jewels of British diplomacy — at a time when America was riding an economic wave and Britain was rebranding itself as “Cool Britannia.” Mr. Meyer mostly just had to keep his hand on the tiller, with chores such as keeping London apprised of the latest twists in disclosures over President Bill Clinton’s affair with White House intern Monica Lewinsky.

He did his homework. Clinton was term-limited from another White House run. Mr. Meyer wondered how Bush — then a possible candidate — would mesh with Blair. He sought out then-Texas Gov. Bush in 1998 at the governor’s mansion in Austin and had a 40-minute chat. “Bush admitted that, apart from Mexico, he did not know much about international affairs and that he would do well to broaden his experience,” Mr. Meyer wrote in an official report on the encounter.

Between 2003 and 2009, he served as chairman of Britain’s Press Complaints Commission, which deals with complaints about media intrusions into private lives, including the royal family. He then hosted several TV series including “Mortgaged to the Yanks” in 2006, recounting U.S. postwar loans to Britain, and “Getting Our Way,” a 500-year history of British diplomacy based on his 2009 book of the same name.

He kept a running commentary on world affairs and British policies on his Twitter account @sirsocks. He was knighted in 1998.

“DC Confidential” caused the most stir, however. A former deputy prime minister, John Prescott, branded Mr. Meyer a “red-socked fop” and joined others calling for him to be punished for spilling insider stories of British leaders. But the public loved his tales, including how Major would sometimes complain about press coverage even before he put on his pants.

“If society’s shakers are divided between the insiders and the outsiders, Sir Christopher Meyer is more insider-ish than a langoustine snug in its shell,” wrote British author Jasper Gerard in the Sunday Times.

His first marriage, to Françoise Winskill, with whom he had two sons, ended in divorce. In 1997, while serving briefly as ambassador to Germany, he married Catherine Laylle Volkmann, a half-French, half-Russian former commodity broker. At the time, she was involved in an international campaign for the rights of divorced and separated parents to have access to their children when taken across borders.

For a decade, her ex-husband had refused to let their two sons return to Britain from a vacation in his native Germany. A German court ruled the children should remain in Germany, but as young adults they were reunited with Laylle. In 1999, she created the organization Pact (Parents and Abducted Children Together), recruiting Hillary Clinton as honorary chairwoman.

Complete information about survivors was not immediately available.

Laylle’s court fight was also what brought her together with Mr. Meyer. A “whirlwind courtship,” he later said. They were married at a registrar’s office the day before he was scheduled to leave for Washington to take up the ambassador post.

“I think of two people standing, hand in hand, on the highest diving board,” he told the Daily Mail in 2005, reflecting on his marriage and arrival in Washington in less than 24 hours. “We close our eyes, jump and hit the water. It was sink or swim.”