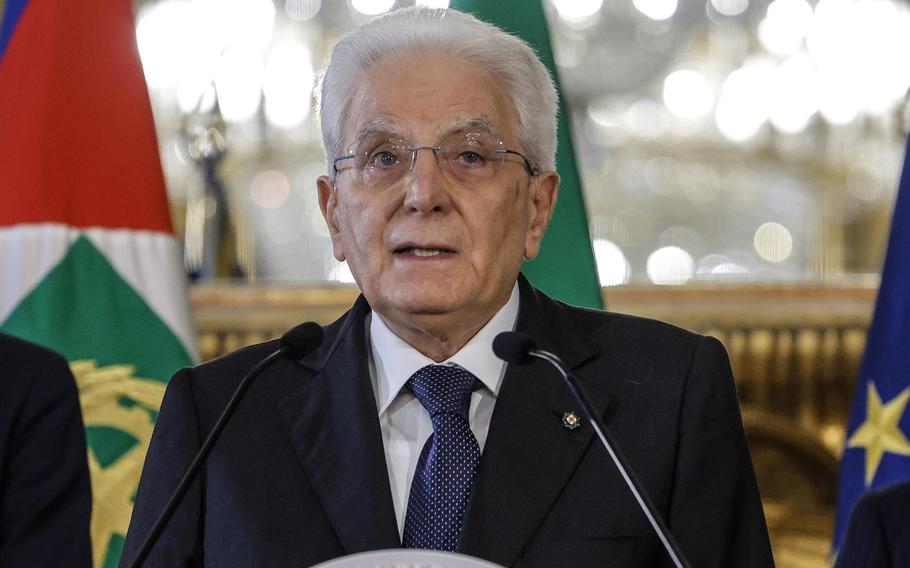 Italian President Sergio Mattarella speaks at the Quirinale Presidential palace in Rome, Thursday, July 21, 2022. Italy’s president says he has dissolved Parliament after Premier Mario Draghi’s coalition fell apart. No date was set for a new election, but President Sergio Mattarella said it must be held within 70 days under Italy’s Constitution. Mattarella said he decided on early elections because the lack of support for Draghi also indicated there was no possibility of forming another government that could carry a majority of lawmakers. (Giuseppe Lami/AP)

ROME — Italy’s president, marking the 100th anniversary of one of the attacks that helped bring dictator Benito Mussolini to power, on Thursday encouraged Italians to reinvigorate their country’s democracy as a bulwark against fascism.

President Sergio Mattarella was commemorating the trashing and torching by fascist thugs of a farm cooperative building in the northeastern city of Ravenna 100 years ago. The violent attack was one in a series launched by fascist supporters of the dictator, whose iron-rule would last into World War II.

Italy's fascist legacy faces increasingly closer scrutiny these days as the country holds an early parliamentary election on Sept 25. Opinion polls indicate the far-right Brothers of Italy, which has neo-fascist roots, would be the top vote-getter, with the party's leader, Giorgia Meloni, eager to become premier.

She has never disavowed her party's fascist roots but has distanced it from Mussolini's racial laws targeting Jews.

Meloni is now the dominant force in an alliance with the right-wing League party led by Matteo Salvini and the center-right Forza Italia party led by former Premier Silvio Berlusconi. The two latter parties have seen their support erode in recent local elections.

Mattarella, as head of state, serves as a guarantor of the republic's post-war Constitution. He called the Ravenna attack a “chapter of our history that would lead to the loss of freedom for Italians, with the start of the dark season of the fascist dictatorship."

Mussolini took power in a march on Rome by his followers in October 1922.

In his speech, Mattarella said Italy's democracy had survived World War I only to be rocked by "dramatic social emergencies, turbulence, strikes, the occupation of factories" and other violence in the immediate post-war period.

Mussolini came to power during a period of “weak” government, the president said, adding that democracy is born of the “widespread conscience of responsibility of each one of us in the defense of common freedoms.”

“It's up to us to regenerate it every day,” Mattarella said, appealing to young people in particular to take up that responsibility.

Sinking Draghi's pandemic unity government were Salvini, Berlusconi and the populist 5-Star Movement, all refusing to back him in a confidence vote.

Meloni was the only major leader to refuse to join Draghi's pandemic unity government when it was formed in early 2021 after he was tapped by Mattarella. She argued that Italians should decide their leader in an election.

When it appeared that Berlusconi and Salvini were waffling at the prospect of Meloni becoming the next premier — and the first woman to hold that office — she demanded the three of them huddle to confirm the alliance's long-standing rule: whoever gets the most votes becomes its pick for the premiership.