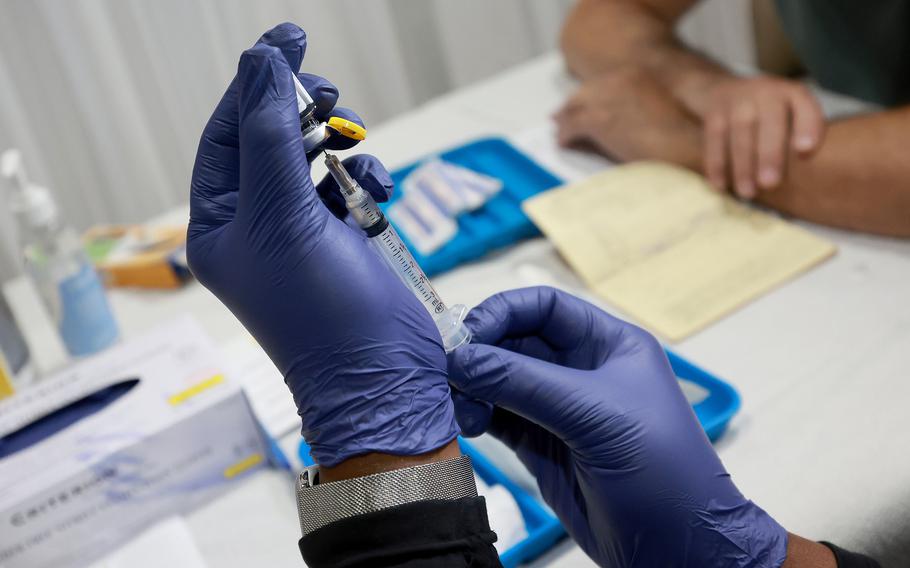 A health care worker prepares to administer a monkeypox vaccine at the Pride Center on July 12, 2022, in Wilton Manors, Florida. (Joe Raedle/Getty Images/TNS)

(Tribune News Service) — The monkeypox outbreak is a public health emergency of international concern, the head of the World Health Organization said, overruling a divided expert panel to issue the group's highest alert.

The move paves the way for stepped-up global cooperation to stop the virus, which has spread to dozens of countries. The last time the WHO made a similar declaration was during the early stages of the COVID-19 outbreak in January 2020.

U.S. Health and Human Services Secretary Xavier Becerra called the WHO decision "a call to action for the global health community." President Joe Biden's administration has made vaccines, testing and treatments available and is "determined to accelerate our response in the days ahead," he said in a statement.

WHO Director-General Tedros Adhanom Ghebreyesus personally intervened after nine members of the expert committee were against declaring the monkeypox outbreak an emergency, while six were in favor. Tedros and the health organization had faced criticism in some quarters that they acted too slowly to ratchet up the alarms on COVID.

"We have an outbreak that has spread around the world rapidly through new modes of transmission," he said during a press briefing in Geneva on Saturday.

A PHEIC — pronounced "fake" — applies to an extraordinary event that carries a public health risk via the international spread of a disease, and one that potentially requires a coordinated response. It can be used to encourage nations to cooperate on countermeasures, while letting the agency recommend steps such as travel advisories.

U.S. health officials told reporters on Friday they've been weighing a similar declaration, which would ultimately come from the Department of Health and Human Services.

"We're looking at that, looking at what are the ways in which the response could be enhanced by declaring a public health emergency," Ashish Jha, the White House COVID response coordinator said.

Raj Panjabi, coordinator of the White House Pandemic Office, said after the WHO's decision that a coordinated international response is essential and "we must step up our work to aggressively combat this virus and protect communities" affected by monkeypox in the U.S. 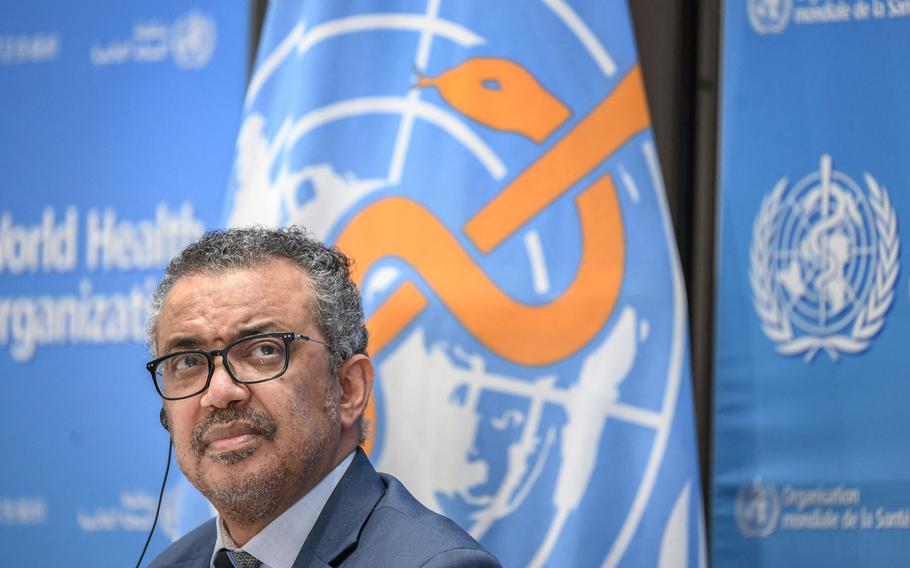 World Health Organization (WHO) Director-General Tedros Adhanom Ghebreyesus attends a news conference on Dec. 20, 2021, at the WHO headquarters in Geneva. (Fabrice Coffrini/AFP/Getty Images/TNS)

A cousin of the smallpox virus, monkeypox has mostly been confined to developing countries for years, but has spread across Europe and the U.S. in recent months.

The WHO's assessment is that the risk of monkeypox is moderate globally and in all regions, except in Europe where it is high, Tedros said.

The pathogen typically causes flu-like symptoms, followed by a rash that often starts on the face and spreads down the belly. The illness often lasts for two weeks to a month, and can be deadly.

The WHO said there are about 16,000 confirmed cases across 75 countries and regions, although most cases are from Europe. Five deaths have been recorded in Africa, the agency said.

A large number of cases occurred in people between the ages of 31 to 40, and the majority of them were in male patients, the WHO said.

A large proportion of cases have been among men who've had sex with men, and many have occurred within sexual networks, though anyone can contract the disease. The U.K. government recently expanded the provision of the smallpox vaccine Imvanex, which is shown to be effective against monkeypox, to some at-risk gay and bisexual men to help control the spread. The EU has also approved Imvanex to target monkeypox.

The WHO recommended that nations implement a coordinated response to stop transmission and protect vulnerable groups by offering international travel recommendations; intensifying surveillance and public health measures; and accelerating research into vaccines, therapeutics and other tools, among other recommendations.

"We believe this will mobilize the world to act together. It needs not only coordination but solidarity," Tedros said.