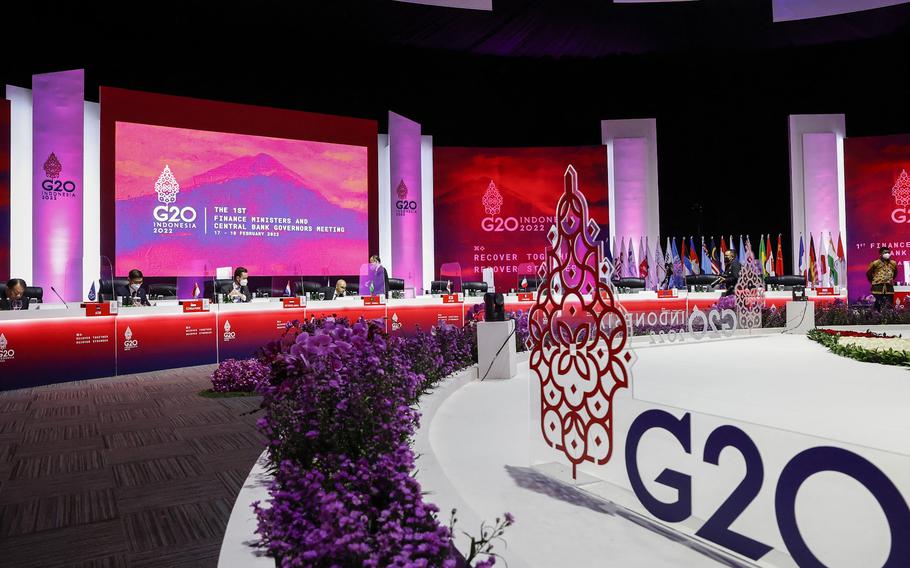 Head of delegates prepares for a meeting on the last day of the G20 finance ministers and central bank governors meeting in Jakarta on 18 February 2022. (MAST IRHAM)

While many blame policy makers for failing to spot the inflation surge they’re now fighting and contributing to it with easy money, U.S. Treasury Secretary Janet Yellen set the tone early at the gathering in Bali, Indonesia, saying the Putin regime had used food “as a weapon of war.”

She said that its actions have prompted “a global crisis of food insecurity as prices spiked for food, fertilizer, and fuel.” Half of the run-up in U.S. inflation was due to energy costs, for which Russia bore the blame, she said.

The finance ministers and central bank governors left Bali with no communique on how to resolve the many agenda items — inflation, supply chains, recession risks, debt, food security, and climate change among them. The lesser-valued and briefer chairman’s summary noted incremental progress on food and energy relief, such as through a tentative emergency fund.

“Many members agreed that the recovery of the global economy has slowed and is facing a major setback as a result of Russia’s war against Ukraine, which was strongly condemned, and called for an end to the war,” the concluding statement noted. “One member expressed the view that the sanctions are adding to existing challenges.”

The focus on Russia as the source of global inflationary woes didn’t translate to much actionable agreement on what to do about it. Yellen’s pitch for an oil-price cap gained little traction and European allies are perhaps ready to launch the experiment alone with the US.

In a blow to the credibility of such gatherings, a rare achievement for a recent meeting — last year’s U.S.-led global tax deal for a corporate minimum rate — met a fresh hurdle in Washington as a member of President Joe Biden’s own party rejected several of the administration’s tax and climate proposals.

The Russia blame game meant there was less attention to how each economy’s finance ministers and central bankers own actions have contributed to the current global situation. The International Monetary Fund’s director for strategy, policy and review, Ceyla Pazarbasioglu, listed a wider range of challenges as she flagged that the global growth outlook will be cut “substantially” in the fund’s next update.

Surging food and energy prices, slowing capital flows to emerging markets, the ongoing pandemic and a slowdown in China make it “much more challenging” for policymakers, Pazarbasioglu said at a Sunday panel in Bali. “It’s shock after shock after shock which are really hitting the global economy.”

In an interview with Bloomberg News a day earlier, IMF Managing Director Kristalina Georgieva cautioned that governments must be careful to not work against their monetary authorities.

“Monetary policy has to tighten but fiscal policy has to pay attention to the impact of inflation on vulnerable populations and on businesses, making sure that these two levers do not clash” with blanket fiscal spending that drives up prices even more. Central bankers were less vocal than their finance chief colleagues at the meetings. Some, like Singapore and the Philippines, attended virtually as they oversaw unscheduled decisions at home to tighten conditions as global monetary mandarins scramble to rein in surging inflation.

“The path to a soft landing is narrowing; we think it is still a feasible path but certainly not a very easy one,” said Hyun Song Shin, head of research at the Bank for International Settlements, at the Sunday panel. “Where central banks take monetary policy in a rapid and decisive manner and have a front-loaded response to inflation, that is more conducive to a soft landing.”