Draghi will offer to resign after Italian coalition splinters 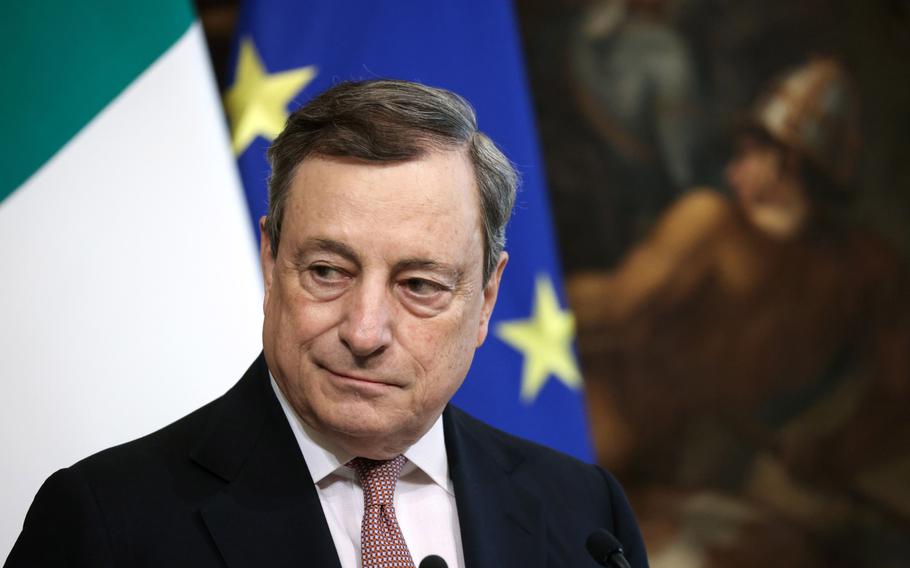 Mario Draghi, Italy’s prime minister, during a news conference following his meeting with Fumio Kishida, Japan’s prime minister, at the Chigi Palace in Rome, Italy, on May 4, 2022. (Alessia Pierdomenico/Bloomberg)

Italian Prime Minister Mario Draghi will offer his resignation later Thursday after the second-biggest party in his governing coalition boycotted a confidence vote.

The premier told his cabinet that he will offer to step down in a meeting with President Sergio Mattarella, according to a statement from his office. Draghi was expected to meet with Mattarella later in the evening.

Italian bond futures plunged to their lows for the day and the euro dipped back below parity with the US dollar after the news. September futures on 10-year Italian government debt fell below 122, the lowest since June and below their 21-day moving average.

“The loyalty agreement that was the foundation of my government has gone missing,” Draghi said in the statement. “The majority of national unity that backed this government since it was set up is not there anymore.”

It’s unclear what the next step will be. Mattarella could ask the former head of the European Central Bank to seek support from all allies in a new vote. A collapse of the coalition could prompt an early election, possibly in the fall, but several parties would seek to avoid this.

Italy’s political turmoil comes as Europe grapples with an energy crunch caused by Russia curtailing gas exports amid its war in Ukraine, stoking fears of a recession. The European Union, whose industries are heavily dependent on Russian gas, cut its growth forecast for 2023 in new projections.

A Draghi exit could throw in doubt his country’s reforms needed to benefit from EU recovery funding, the administration’s strong pro-European stance and its staunch backing for military shipments to Ukraine.

The political turbulence has “concerned and surprised” EU officials, Economy Commissioner Paolo Gentiloni said. “Stability is a value in itself,” Gentiloni, himself a former Italian premier, said in Brussels as he described the “troubled waters” facing the bloc ranging from war to high inflation, energy risks and geopolitical tensions.

Draghi’s intention to resign was prompted by former premier Giuseppe Conte’s decision to walk out from a confidence vote in the Senate on Thursday on an aid package for businesses and households hit by high energy prices.

It remains to be seen if Mattarella will be able to patch Draghi’s broad but divided coalition back together.

Conte’s Five Star Movement is the second-biggest group in parliament but has struggled to regain visibility after falling in the polls. It had been complaining for weeks that the government wasn’t doing enough to shield families from the crisis.

Matteo Salvini, leader of the League which is the biggest party in the coalition, has called for a snap vote. All the other parties in Draghi’s alliance, including the center-left Democratic Party, want the premier to verify support for the coalition.