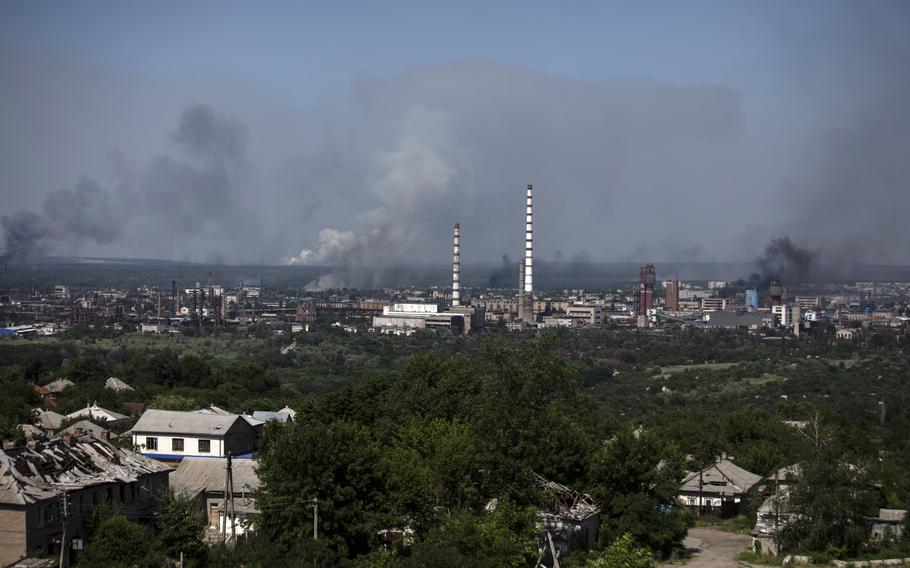 Smoke rises above Severodonetsk during a battle between Russian and Ukrainian forces on June 20. MUST CREDIT: Photo for The Washington Post by Heidi Levine. (Heidi Levine/Washington post)

KRAMATORSK, Ukraine - No one was coming to rescue Arif Bahirov.

After months of fierce fighting for control of the Luhansk region, a withering Russian assault on what remained of battered Ukrainian military positions threatened to cut off one of the last escape routes from Bahirov’s nearly surrounded hometown of Severodonetsk. Carrying only a small backpack, he began a perilous 50-mile journey by bicycle.

Bahirov, 45, who worked in public relations, knew this “road of life” well from volunteering for months to help evacuate hundreds of residents of Luhansk, a sprawling region in Ukraine’s east bordering Russia. He had seen plenty of Russian missile attacks targeting cars and trucks out here, but now as he pedaled, he clung to one thought: “No one would shoot a man on a bicycle.”

It was late May, and he was exhausted. Too many days begging his neighbors to flee amid the constant shelling. Too many sleepless nights and not enough food. He tried to keep his focus as he swerved around bomb craters and jagged bits of shrapnel, listening for incoming and outgoing fire.

“I wasn’t thinking. I was listening to my surroundings,” he said.

About 20 miles in, he heard the familiar rumble of a low-flying Russian plane. Somebody was shooting at a man on a bike. He dove for cover in a ditch filled with wildflowers, and a bomb exploded less than 300 feet away.

Four and a half hours later, he arrived, breathless, to a checkpoint outside the city of Bakhmut, where a surprised Ukrainian police officer inspected his documents and waved him through.

More than a month after escaping, Bahirov hasn’t yet come to terms with what he experienced during the destruction of his city. Even if he were able to return, his apartment and everything in it was destroyed by Russian shelling. “I only have what I put in my backpack. I have to start all over again from the beginning,” he said, speaking from his temporary home, hundreds of miles away in Kyiv, the Ukrainian capital.

The complete capture of Luhansk would mark the first time an entire region has fallen to Moscow-backed forces and their separatist proxies since the Feb. 24 invasion. Recent gains in Ukraine’s east move Russian President Vladimir Putin closer to his stated goal of seizing Donbas, made up of the Luhansk and Donetsk regions.

On July 3, the Russian Defense Ministry announced the “liberation” of Luhansk, but its regional governor, Serhiy Haidai, reported that Ukrainian forces were holding out against the Russians in a “very small” area.

Luhansk, an ethnically and linguistically diverse region, is part of Ukraine’s industrialized east. The area has been at war since 2014, after Moscow-backed separatists seized a large swath of territory and established the self-proclaimed “People’s Republic of Luhansk.” That conflict has displaced tens of thousands and severely damaged cities and villages. In a sign of the area’s complicated ties to Ukraine and Russia, Russian state media outlets broadcast videos of some residents cheering the arrival of Russian troops.

The region’s capital and most populous city, Severodonetsk was one of the hardest hit. By late May, an estimated 90 percent of the city’s buildings and all of its “critical infrastructure” had been damaged, according to Ukrainian President Volodymyr Zelensky.

Maryna arrived in the city on Feb. 23 to celebrate her mother’s birthday. The Washington Post is identifying her only by her first name for the safety of her family members now living under Russian occupation.

The 27-year-old, who hoped one day to become the mayor of her hometown, was trapped in the city for a month after the Russian invasion. The relentless shelling of Ukrainian military positions in an industrial district near their home shook the walls of her family’s apartment. “I could feel it in my knees,” she said.

During the daytime, her parents searched for supplies at the few stores that remained open. They stopped when Russian artillery struck outside a grocery store, killing a man standing near her parents.

The family slept sitting upright, fully clothed, on the living room couch, fleeing to the hallway corridor or bathroom every time incoming rounds crashed near their building. They initially thought the Ukrainian army would rescue them quickly, but they remained trapped there for a month.

Maryna said her father, once deferential to Russia, was changed by the ordeal. “Why are the Russians coming here to kill me to protect us from Ukrainians?” he said. The 60-year-old even tried to sign up for the Ukrainian military but was turned away because of his age.

When their family made plans to escape, her father refused to leave. “This is my home. The Russians came here. Why should I leave?” her father said, according to Maryna.

“It was difficult for us to accept, but there was no choice,” she said.

Maryna and her mother fled the city, but her father moved into a shelter in the basement of their apartment building with 30 others. By late May, three months after the war started, the city had no water, electricity or phone service.

In late June, Maryna received a video from her father: “I don’t know how long I can take this anymore,” he said, amid the crash of artillery shells outside.

“I’m just waiting for a call to make sure my dad is alive,” she said. In the brief messages they’re able to exchange, they have stopped discussing escape. “I don’t even know how to get him out,” she said.

Some parts of the region were spared total devastation. In early March, Russian forces took the village of Yevsuh without a single shot fired after Ukrainian forces withdrew, according to Yulia Naydysh, a small-business owner and local journalist.

With Ukrainian cellphones cut off shortly after the start of the invasion, her family’s only connection to the outside world was Russian state television. In her community, no one came out to protest Putin’s actions; there was no territorial defense. The town did nothing to prepare itself for the war.

Naydysh, then 19, voted in the sham 2014 referendum held by Kremlin-backed separatists in Luhansk. She moved to Russia, afraid that the Ukrainian government would attack her village. “I still haven’t forgiven myself. When the war started, I thought it was my fault,” she said in a phone interview.

She moved back to her town in October 2021, and she said her loyalty is now with her home country. But during the two months she lived under Russian occupation, she felt like she was the only vocal supporter of Ukraine.

She and her father would bicker over false Russian state news reports accusing Ukraine of atrocities. She said countless hours sitting in front of the television made her father believe the Kremlin propaganda.

By late April, with separatists firmly in control of her village, she convinced her father, who was in desperate need of medical care, that it was finally time to leave. She agreed to take him to live with her brother in Russia, then she planned to return to a safer part of Ukraine.

“I walked around and said goodbye to my house. I was saying goodbye to everything I had,” she said. “At that moment, I felt disappointed in my country and my father.”

She brought her father to Russia, enduring an interview by suspicious agents from Russia’s FSB intelligence agency. Then she managed to find her way to safety in Latvia. There, she was captivated by news reports showing video of protests against Russia in Luhansk. She plans to return soon to Kyiv. Ultimately, she wants to return to her home.

“We’re at a turning point for the people of Luhansk,” she said. “In the past, people used to be forgiving when their neighbors or loved ones had pro-Russian views. Now, those that collaborated with Russia will be forced to flee.”