Family of American missing in Ukraine says US response is inadequate 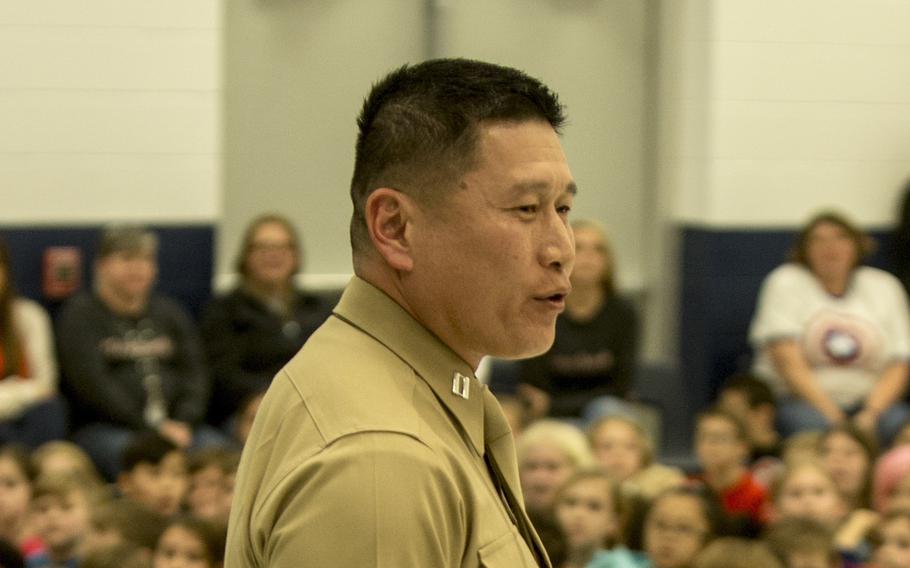 Grady Kurpasi, who retired from the Marine Corps last year, is seen here speaking in 2019. Kurpasi was last seen April 26 in southern Ukraine, where his team of international volunteers was engaged in combat with Russian forces.  (Aaron Douds/U.S. Marine Corps)

The family and friends of a U.S. military veteran who went missing in Ukraine have accused the Biden administration of inaction, saying any hope for finding him alive hinges on diplomacy between Washington and Moscow but that so far the government's efforts are lacking.

Grady Kurpasi, 50, was last seen April 26 in southern Ukraine, where his team of international volunteers was engaged in combat with Russian forces. His loved ones fear he has been killed or captured — and they are mindful of the Kremlin's recent declaration that Americans taken off the battlefield shall not be granted protections afforded to prisoners of war.

A U.S. official, speaking on the condition of anonymity to discuss internal deliberations, said the administration is closely monitoring the situation and seeking information for the family, but stopped short of saying what more the government may do. Neither the Russian Embassy in Washington nor the Ukrainian Defense Ministry responded to requests for comment.

The mystery surrounding Kurpasi's whereabouts presents a unique dilemma for President Joe Biden, who has rallied Western support for Ukraine while ruling out direct military intervention and strongly cautioning Americans against getting involved. At least two U.S. citizens are believed to have been killed in the fighting, and another two are known to be captured.

Kurpasi is a retired Marine Corps infantry officer and Iraq War veteran. The day of his disappearance, he and a British man, Andrew Hill, had left their position in a makeshift observation post to investigate the source of incoming fire, a member of the group told The Washington Post. Hill was captured by Russian forces, and another two members of their unit were killed soon after.

The State Department made contact with Kurpasi's wife, Heeson Kim, soon after he was reported missing. Last month, a group of veterans who served with him in the Marines provided officials with a 46-page document detailing, among other information, the coordinates of his last known location and where his phone had been detected after his disappearance.

In a statement, the State Department said U.S. officials are in contact with Ukrainian and Russian authorities regarding American citizens "who may have been captured by Russia's forces or proxies while fighting in Ukraine." The agency declined to address questions about Kurpasi's disappearance specifically.

His wife and friends said they are upset by what they characterized as a lack of urgency from the administration. In an email, Kim said, "I don't have confidence that they invested or are going to invest any resources" to help track down what happened to her husband.

Biden has faced public pressure from the families of other Americans held by Russia, including WNBA star Brittney Griner, who on Thursday pleaded guilty in a drug case that has magnified the diplomatic standstill between the world powers over the war in Ukraine.

Griner's case has been elevated to an office within the State Department that deals with citizens it decides are wrongfully detained, and the president has told her wife that he is working to secure her release. That drew a rebuke from the family of Paul Whelan, a Marine Corps veteran sentenced by a Russian court to 16 years in prison over espionage charges he has denied. Whelan's sister told CNN last week she was "astonished" her brother's case has not received such attention. Biden called her following the report, vowing to secure his release, a White House official said.

The lack of a strong public response to Kurpasi's disappearance may suggest the administration has made a distinction in how it views such cases. Griner was arrested while working in Russia whereas Kurpasi joined the war in Ukraine on his own accord.

Kurpasi's friends said that Biden has not spoken to the family and that the U.S. government rarely shares anything illuminating about the case. Rather, they contend, the State Department appears dependent on them for information. "The response I got back was, 'He was fighting under another flag, so keep digging and doing what you're doing to help,'" said George Heath, one of Kurpasi's friends.

The two U.S. military veterans captured in Ukraine, Alexander J. Drueke and Andy Tai Huynh, are being held by Russian-backed separatists. Drueke's aunt Dianna Shaw said the family is encouraged by the efforts of State Department personnel and lawmakers in Alabama. U.S. and Ukrainian diplomats are working to get both men on a list of captives potentially eligible for negotiated release, she said.

"When you have good civil servants, you get good results," Shaw said.

Kurpasi, who lives with his wife in North Carolina, was born in South Korea and immigrated to the United States. He enlisted in the Marines at age 29 and served three tours in Iraq, according to his military service record provided by the Marine Corps.

In 2007, Kurpasi was wounded along with several other Marines when an insurgent detonated a suicide vest during a mission in the city of Ramadi, said Don Turner, a fellow veteran who served with Kurpasi and Heath.

Kurpasi was later commissioned as an officer after graduating from UCLA, where he received a scholarship from the Pat Tillman Foundation. The group provides education grants to promising leaders with a military background. He retired from the military in 2021.

Although the U.S. government has warned American citizens not to join the war, Kurpasi, friends say, was compelled to help the Ukrainians fight back and felt his leadership experience would be valuable. He arrived in mid-March and participated in battles outside the capital, Kyiv, before assembling a team that was dispatched to the south, near Mykolaiv.

The events surrounding Kurpasi's disappearance were recounted by a surviving member of his unit, Team Raven, which had been tasked with holding an observation post to blunt Russia's advance outside the coastal town of Oleksandrivka and buy time for civilians to escape.

The team members received fire from an area they believed was a Ukrainian position, but they did not have radio communication with nearby units, a German volunteer named Pascal told The Post. He spoke on the condition that his full name not be disclosed, citing a fear of reprisal.

Kurpasi and Hill, the British fighter, left to investigate. They radioed back, saying they were receiving artillery and small-arms fire, and needed covering fire to return. Russian units shelled the position in response.

Willy Joseph Cancel, another U.S. Marine Corps veteran who was part of Kurpasi's team, was hit along with a Dutch volunteer. Pascal said he tried to treat their wounds but was unsuccessful. He described having to crawl more than a half-mile before running toward a friendly unit.

Pascal said he could not retrieve the bodies of those slain and did not see what became of Kurpasi and Hill after they walked away.

Hill was captured and later charged with fighting as a mercenary by officials in the self-proclaimed Donetsk People's Republic, a Russian-backed zone within eastern Ukraine. Russian state media has reported that he could face the death penalty.

Photos taken from Hill's phone and distributed to his contacts on the WhatsApp messaging platform after his capture appear to show a Russian fighter with a camouflage tarp used by Kurpasi, his wife said. It has led his family and friends to believe that Hill may have information about what happened to Kurpasi, and they have urged the State Department to work with British counterparts to see if they can glean anything from him.

Kim told Kurpasi's friends that a State Department official told her that they would try. A spokesperson for Britain's Foreign, Commonwealth and Development Office said the department will not discuss individual cases.

There are many military veterans working to uncover what happened to Kurpasi, Turner said, adding that their friend would do the same if the roles were reversed.

"When you served with somebody, you have a bond," he said. "And that bond is unbreakable."