A Ukraine priest splits Sundays between church and the front lines 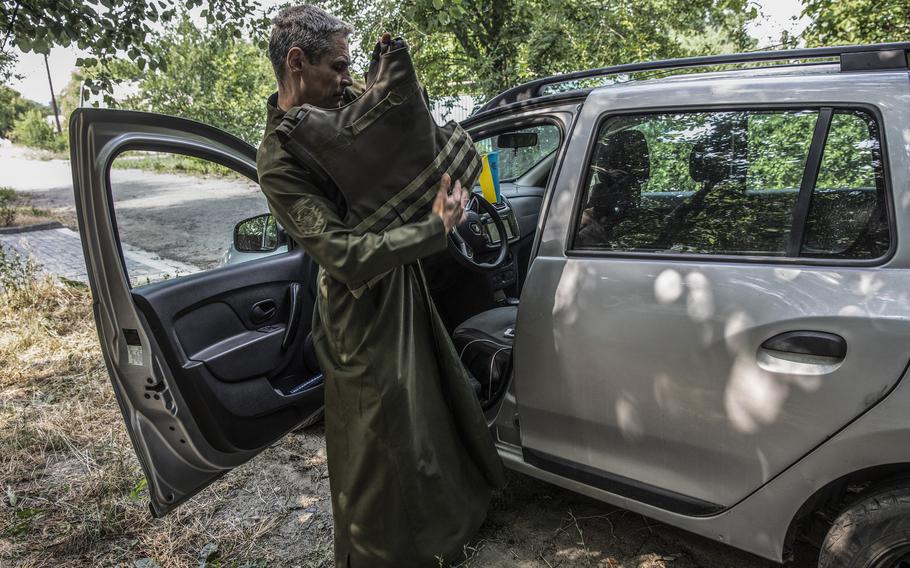 Father Vitalii Kester packs a flak jacket into his car on the way to the front-line Mass. (Heidi Levine/for The Washington Post)

KOSTIANTYNIVKA, Ukraine — Father Vitalii Kester’s Sunday routine is not what it used to be, before war drove most of his congregation away and he started wearing Army pants beneath his robes and splitting his day between one Mass at church and another with soldiers on the battlefields of eastern Ukraine.

But on this July Sunday, the sabbath started out as normally as life can be for a war-zone priest leading a front-line church. Kester, 46, greeted the trickle of parishioners coming for the 10 o’clock service at St. Mykolai the Miracle Worker, a log church topped with onion-shaped domes. The sound of artillery is nearly constant in this mostly abandoned city 11 miles from the nearest Russian troops.

“Glory to Jesus Christ,” he said to Igor Ryzenko, adding, “Do you have any fuel containers I can borrow?” because scrounging gasoline and water has also become normal here.

“I think so. Let me look at home,” said Ryzenko, a fighter in a local militia.

Inside, Kester began to say the Mass for a crowd of just half a dozen, nothing close to the 20 or 30 who would have been there before two-thirds of the city fled to safety. In the midst of their “Hallelujahs,” a distant explosion sounded that, unlike most of the booms, caused several of them to look up. 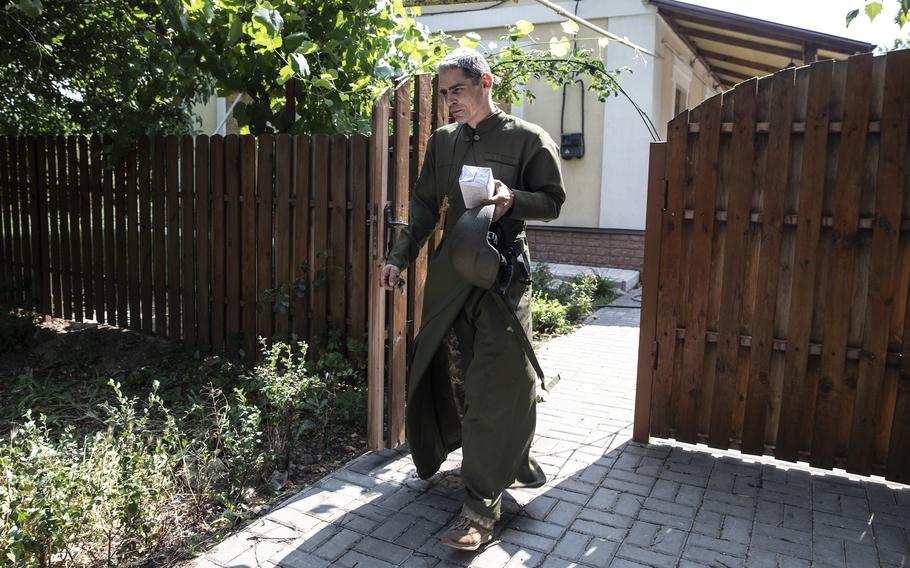 Father Vitalii Kester wears his drab cassock and carries his helmet on the way to a second Mass, for front-line soldiers. (Heidi Levine/for The Washington Post)

Residents here have learned the difference between outgoing Ukrainian artillery fire and an incoming Russian strike. Something had hit close, as was evident by the plume of smoke rising a half-mile or so north of the church.

Kester didn’t pause. The sunlight fell across his robes in stripes because boards have been nailed over the windows, not to protect the church from the Russians who are steadily closing in on the town, but from the Russian-sympathizing neighbors who already surround them.

“Some people would break in,” Ryzenko said after the service. He said he helped build the Greek Catholic church several years ago, despite a petition opposing construction by local Russian Orthodox priests who dismissed the rival denomination as a “cult.”

The tension reflects a larger split between Christian factions that has led many to accuse the churches still affiliated with Moscow as siding with Russia in its fight to take over the entire eastern Donbas region. In this heavily Russian-speaking part of the country, attending a Ukrainian church can feel like worshiping behind enemy lines.

“I have never set foot in a Russian Orthodox church and never will,” said Ryzenko, who has the Ukrainian trident symbol tattooed on his biceps. “I know the lies and propaganda they spread.”

Of those who have remained in Kostiantynivka, many are the “waiters,” Kester said, those who will be happy to welcome the foreign troops.

He took off his embroidered gold robe and left the church in an olive drab cassock, marking his shift from parish priest to army chaplain. He was preparing to take the sacrament to the troops.

“There are two wars going on here now,” he said. “The fight for our land and the fight for the soul.”

Kester made a stop as his house, where he and his wife, Natalia, ate a quick lunch of sandwiches and coffee. (Greek Catholic priests can be married.) She tries to go with him on his Sunday trips to the front — “It is easier to go than to not know that he is OK” — but today she had to stay behind to collect water.

After days of dry taps, a muddy trickle had begun running the night before. The couple was filling the bathtub and every container they could find while the system was functional. 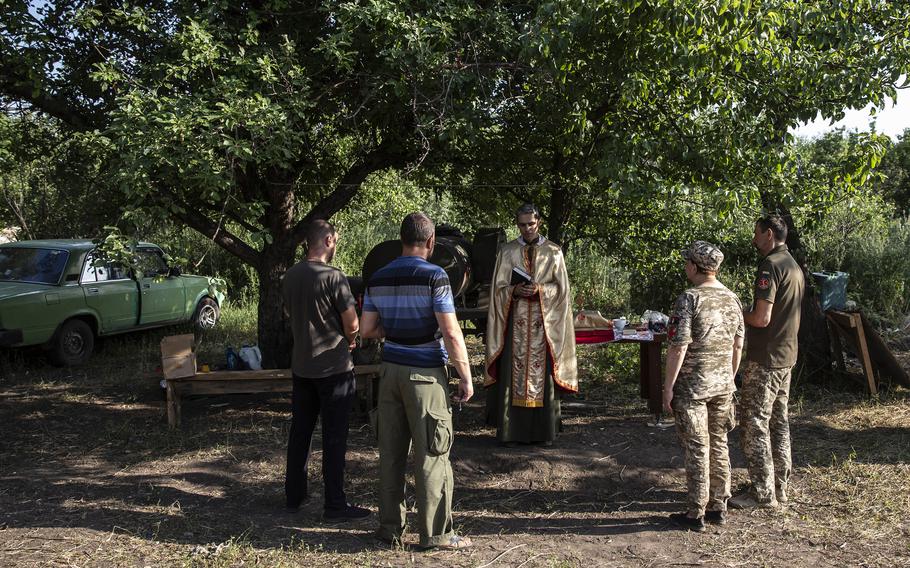 “Without electricity, we can manage, but without water, it’s going to be a catastrophe,” Natalia said. The couple have been determined to stay through four months of war, but she is watching the Russians approach. Referring to a town 24 miles away, she said, “If they take Avdiivka, that will be our last call to leave.”

Kester gathered the kit he needs to celebrate Mass in a combat unit: the flask of wine, Communion bread, a wooden-handled brush to sprinkle holy water. Also body armor and a helmet.

He has been a priest since 2005 and a military chaplain since 2015. In one of his first engagements, he was with troops fighting for control of the Donetsk airport. On a shelf, he keeps a statue of Jesus that was nicked by bullets in that battle.

“I blessed the soldiers going in and coming out, but they wouldn’t let me into the airport itself,” he said. “A chaplain’s job is to reassure them, not give them someone else to worry about.”

He tailors his preaching and his counseling to a range of soldiers at the front, those who are fierce nationalists and those who just needed a job, the believers and the nonbelievers.

His experience with spiritual dynamics in wartime tells him that “many more of them will be believers by the end.” 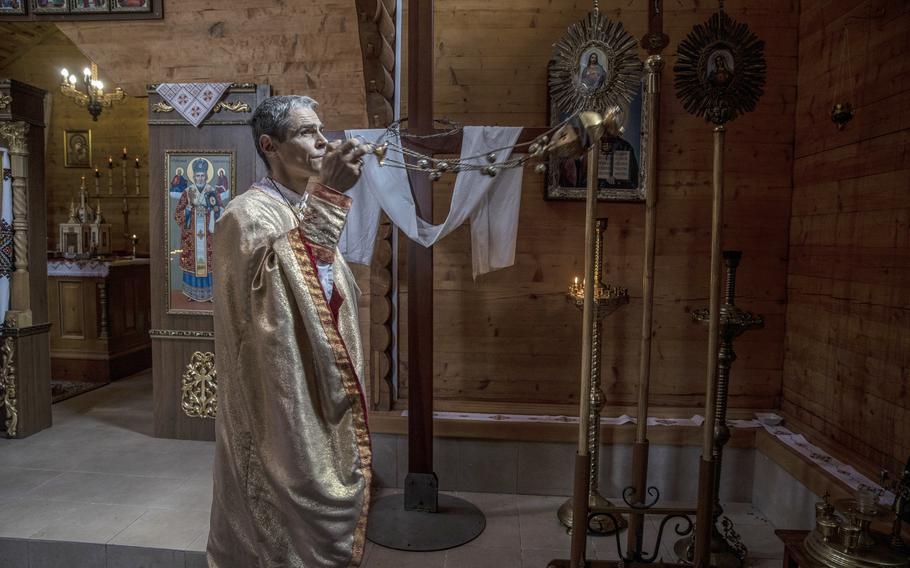 Kester loaded his Renault wagon and set off on the semi-ruined roads of the eastern front, a crucifix swinging wildly from his rearview mirror as he swerved around shell craters and roadblocks. Ukrainian military authorities asked that the precise location of the unit he was heading for this week not be revealed. It was a mechanized regiment that had been involved in the fighting around Severodonetsk and Lysychansk, both front-line cities that have fallen to the Russians in recent days.

“We’ve been praying for God to protect us,” said Oksana Vorobiova, a medic, greeting Kester like an old friend. “How are you? How is your flu?”

“Hello, Father,” said Mykhailo Skorbach, an ambulance driver. “Since you blessed our vehicle at Easter, we have had no accidents. Only some dents.”

Four service members arrived to help set up a wooden table under a tree, out of view of Russian targeting drones, and prepare it as an altar.

Kester pulled his bright vestment over his military cassock, and Skorbach placed a brand-new green helmet on the table beside the candle. A Ukrainian friend shipped it from the United States. “Will you bless my new helmet, Father?”

And, with the smell of frying onions drifting over from the big iron camp stove, the priest raised his hand and began his second Sunday mass. 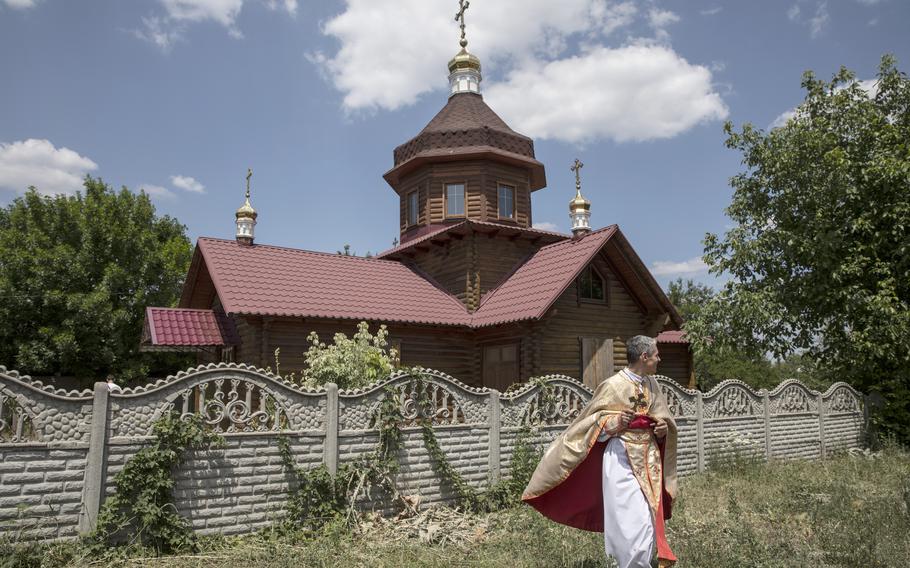 Father Vitalii Kester, outside St. Mykolai the Miracle Worker after a Sunday morning Mass for a handful of parishioners in the eastern Ukrainian village of Kostiantynivka on July 3, 2022. (Heidi Levine/for The Washington Post)