Putin is set to halt gas, and Germany fears it's not coming back 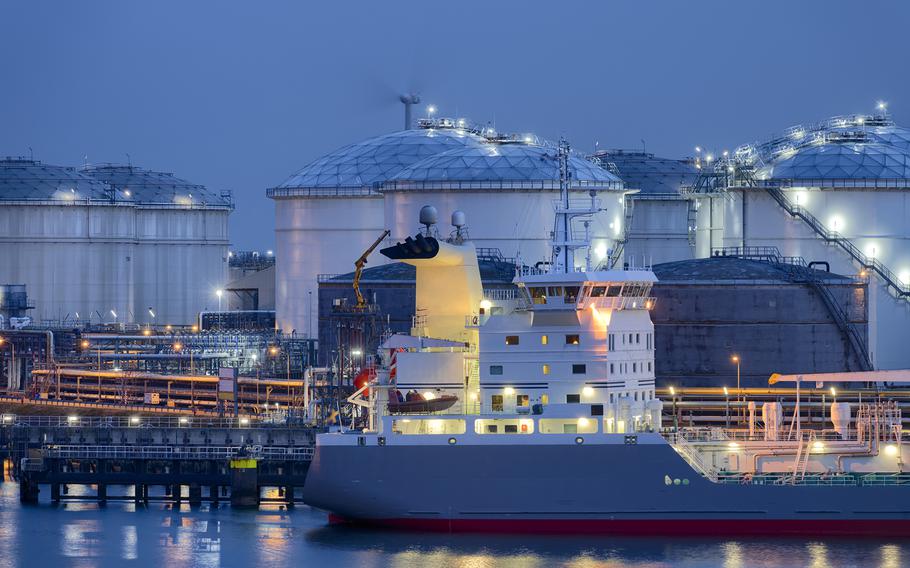 Europe is seeking alternatives such as U.S. liquefied natural gas to Russian supplies after Gazprom PJSC slashed shipments through Nord Stream, its biggest pipeline to Europe, and cut off shipments to countries that didn’t comply with new payment terms. Russia met more than a third of the European Union’s gas demand last year. (Dreamstime/TNS)

FRANKFURT, Germany (Tribune News Service) — On calendars in Germany's industrial heartland and the halls of power in Berlin, July 11 has been marked in red for weeks.

When the main conduit for Russian gas to Europe goes down for 10-day maintenance on Monday, Germany and its allies are bracing for President Vladimir Putin to use the opportunity to cut off flows for good.

If Moscow signals the Nord Stream pipeline won't come back as planned, Chancellor Olaf Scholz's government would likely trigger emergency measures such as rationing and company bailouts. The consequences would almost certainly mean a deep recession for Europe's largest economy and create ripple effects across the continent.

"Are we worried? Yes, we're very worried," said Christian Kullmann, chief executive officer of German chemical giant Evonik Industries AG. "It would be naive and starry-eyed not to be worried."

Given Germany's dependence on Russia for more than a third of its gas supplies and a lack of viable alternatives in the short term, the chance to inflict damage on Europe in retaliation for sanctions and support for Ukraine may be too good for the Kremlin to pass up.

While Moscow denies it's using energy as a weapon, the calculus for Putin is as straightforward as it is cynical. Europe is desperate to fill up storage to keep homes heated and factories running through the winter. So the sooner Moscow acts to disrupt gas markets further, the higher the prices and the more time Russia has to reap the rewards.

"Russia has only so many chips they can play," Olga Khakova, deputy director at the Atlantic Council's Global Energy Center. "They're trying to maximize the tools they have left."

Decades of Russia serving as a stable energy partner have gone out the window in the months since its invasion of Ukraine in late February. The German government now has no visibility into Putin's plans, with lines of communication to state-owned gas giant Gazprom PJSC cut and officials in Berlin referring to the country as a "blackbox." Germany has been gradually preparing the country of 80 million people for tough times ahead. Scholz has compared the situation to the inflation surge in the 1960s and '70s and warned it won't be over soon.

Economy Minister Robert Habeck has evoked images of the financial crisis, warning of Lehman Brothers-like contagion and recently echoing Mario Draghi who as head of the European Central Bank at the time famously vowed to do "whatever it takes" to save the euro.

This time, the urgency is focused on preventing a collapse in energy markets and the fallout that would bring for Europe's industrial engine.

The impact of the energy squeeze is gradually become more tangible. Munich lowered the temperature of its public pools, Cologne is dimming street lights and Hamburg plans to make warm water only available at certain times of the day.

Parliamentary offices in Berlin are lowering thermostats, and Vonovia SE, Germany's largest landlord, will start reducing the night-time temperatures in the bulk of its apartments to 63 degrees Fahrenheit.

In the scramble to prepare, Scholz's administration is bolstering its powers, including rushing through legislation that would allow it to acquire stakes to rescue struggling energy companies such as Uniper SE. Germany's biggest buyer of Russian gas and a key supplier to local utilities put pressure on the government by saying on Friday that it was running short of cash.

Chief Executive Officer Klaus-Dieter Maubach warned that Uniper would soon have no choice but to pull gas from storage, raise prices to customers, and even reduce supply. That's exactly the kind of knock-on effects Habeck has been seeking to avoid as he tries to defend the economy from Russia's weaponization of its energy resources.

"We won't allow a systemically important company go bankrupt and throw the global energy market into turmoil as a result," Habeck said in a response to Uniper's statement, adding that the form of the support was still under discussion.

To fight the crisis, Germany is also backsliding on environmental commitments by reviving mothballed coal plants to generate electricity. The move would enable the country to cut the amount of gas used for power by 52% over the next 12 months, according to BloombergNEF estimates.

The government already has the authority to ration gas. It escalated its alert level to the second-highest "alarm" stage in mid-June after Russian state-owned gas giant Gazprom PJSC reduced Nord Stream flows by 60%.

Declaring an "emergency" would allow Germany's network regulator Bundesnetzagentur to control distribution. While households and critical infrastructure like hospitals would be protected, industrial companies could see deliveries reduced and consumers could still be required to reduce thermostats and lower temperatures on water boilers.

The regulator, known as BNetzA, is hurriedly working on models that would allow it to take a "least-worse decision" on rationing, but they won't be ready until the fall, said Klaus Mueller, the agency's chief.

Germany aims to have storage facilities at least 90% full by November. The current level is about 63%, and the fill rate over the last week — which will likely drop when Nord Stream goes down — would mean it would take 86 days to reach that target.

In the meantime, companies across Germany are getting ready by securing reserves, scouring for alternative fuels and reviewing the risks of shutting down equipment. Manufacturers in neighboring Poland are also preparing for rationing.

"Being worried about it isn't enough," said Evonik's Kullmann, who also heads Germany's chemical-industry lobby. "We're not in a college seminar discussing sociology. Action needs to be taken. We need to prepare for this scenario."

Even without a complete shutdown of Nord Stream, Putin has already hurt Europe's economy. ING estimates that the euro zone will succumb to a recession regardless of Russia's next moves on energy.

As the tension mounts, Habeck has resorted to desperate measures. This week, he made a public appeal to Canada to release a Nord Stream turbine that was in the country for repairs but stranded by sanctions.

While Kremlin spokesman Dmitry Peskov said Russia would be able to lift the pipeline's flows if the component is fixed and returned, Habeck isn't expecting a change in tact. He told Bloomberg that the plea was intended to "take this road of excuses away" from Putin.

It's a sign that Berlin is aware it has few options left.

"It was a grievous mistake that Germany was so dependent on one country with the energy supply, and this country is Russia," Habeck said in an interview. "It took decades to build up the dependency of Russian gas, and we are trying to change this now in months."