One scandal too many: British Prime Minister Boris Johnson resigns 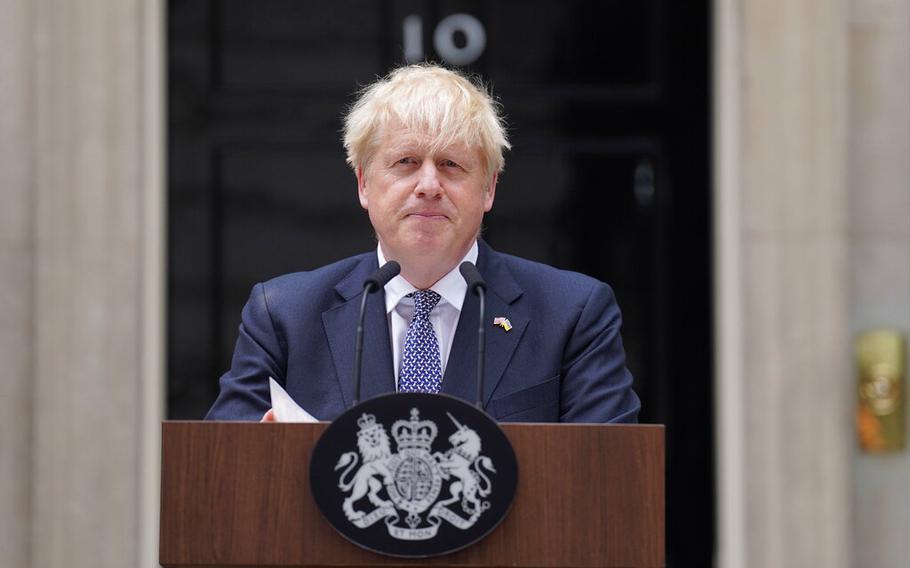 LONDON — Prime Minister Boris Johnson announced his resignation Thursday amid a mass revolt by top members of his government, marking an end to three tumultuous years in power in which he brazenly bent and sometimes broke the rules of British politics.

Months of defiance ended almost with a shrug as Johnson stood outside No. 10 Downing St. and conceded that his party wanted him gone.

The brash, 58-year-old politician who took Britain out of the European Union and steered it through COVID-19 and the war in Ukraine was brought down by one scandal too many — this one involving his appointment of a politician who had been accused of sexual misconduct.

The messiest of prime ministers did not leave cleanly. Johnson stepped down immediately as Conservative Party leader but said he would remain as prime minister until the party chooses his successor. The timetable for that process will be announced next week, he said.

But many in the party want him gone before then, and his government has been shredded by scores of resignations.

After the latest scandal broke, Johnson clung to power for days, defiantly telling lawmakers on Wednesday that he had a "colossal mandate" from the voters and intended to get on with the business of governing.

But he was forced to concede defeat Thursday morning after one of his closest allies, newly appointed Treasury chief Nadhim Zahawi, publicly told him to resign for the good of the country.

"In the last few days, I tried to persuade my colleagues that it would be eccentric to change governments when we're delivering so much and when we have such a vast mandate," Johnson said. "I regret not to have been successful in those arguments, and of course it's painful not to be able to see through so many ideas and projects myself.''

About 50 Cabinet secretaries, ministers and lower-level officials had quit the government over the past few days, often castigating the prime minister for his lack of integrity.

The mass resignations had stalled the business of some parliamentary committees because there were no ministers available to speak on the government's behalf.

"It is clearly now the will of the parliamentary Conservative Party that there should be a new leader of that party and therefore a new prime minister," Johnson said. 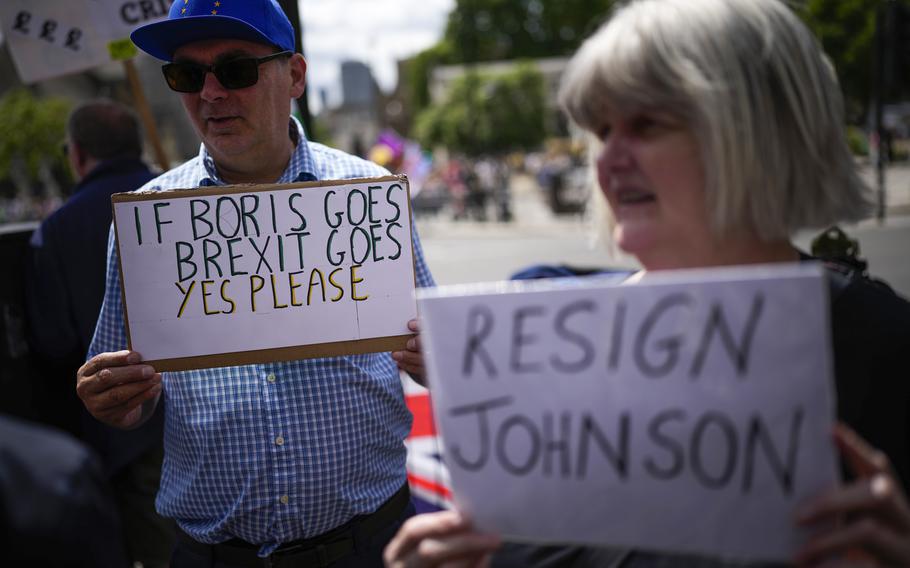 People holds placards as they protest outside the Houses of Parliament, in London, Wednesday, July 6, 2022. (Matt Dunham/AP)

Zahawi, who was promoted earlier this week as Johnson tried to shore up his Cabinet, said he and a group of colleagues had privately expressed their concerns to the prime minister on Wednesday and he decided to go public after Johnson ignored the advice to resign.

"The country deserves a government that is not only stable but which acts with integrity," Zahawi said in a letter posted on Twitter.

It was a humiliating defeat for Johnson, who not only pulled off Brexit but was also credited with rolling out one of the world's most successful mass vaccination campaigns to combat COVID-19.

But the perpetually rumpled, shaggy-haired leader known for answering his critics with bombast and bluster was also dogged by allegations he behaved as if the rules did not apply to him.

He managed to remain in power despite accusations that he was too close to party donors, that he protected supporters from bullying and corruption allegations, and that he misled Parliament about government office parties that broke COVID-19 lockdown rules.

He was fined by police over the parties and survived a no-confidence vote last month in Parliament in which 41% of Conservative lawmakers tried to oust him.

Johnson became prime minister in July 2019, succeeding Theresa May, who resigned after Parliament rejected the Brexit agreement she negotiated with the EU. Johnson pushed his own Brexit deal through in an often messy and turbulent debate.

With his mop of unruly blond hair, he often looked like a schoolboy who had just rolled out of bed and run to class with his pajamas under his clothes.

In his rise to power he showed many of the same habits and abilities that would carry him far but also spell his downfall: He was an ebullient, attention-loving mayor of London; a journalist who was fired for making up a quote and filed exaggerated stories about EU excesses; and a politician with an Eton- and Oxford-honed talent for colorful language and the thrust and parry of debate.

He became known for his light regard for the truth and his glib and offensive marks. He called Papua New Guineans cannibals and likened Muslim women who wear face-covering veils to "letter boxes."

Recent disclosures that Johnson knew about sexual misconduct allegations against a Conservative lawmaker before he promoted him to a senior position in government proved to be one scandal too many.

The crisis began when Chris Pincher resigned as deputy chief whip amid accusations that he had groped two men at a private club. That triggered a series of reports about past allegations against Pincher.

Johnson offered shifting explanations about what he knew and when he knew it. That just heightened the sense that the prime minister couldn't be trusted.

Javid and Sunak resigned within minutes of each other Tuesday night, triggering the wave of departures among their Cabinet colleagues and lower-level officials and sending the government into crisis.

Javid said Johnson's actions threatened to undermine the integrity of the Conservative Party and the British government.

"At some point we have to conclude that enough is enough," he said Wednesday in the House of Commons. "I believe that point is now."

After Johnson's repeated ethical lapses and brushes with political ruin, many Britons reacted to his resignation with surprise, given that he had hung on through so many scandals before.

"It felt like he can just keep on going and keep on ignoring it, so I was bit surprised this morning when saw it on my phone,'' Himmat Dalyway, an investment trader in his 20s, said outside an Underground station in London. "Are you still 100% sure that he is going?''

Now with a leadership election upon them, the Conservatives will have to decide whether they can stomach Johnson as a caretaker leader, a job that normally entails saying little and doing nothing. Johnson is not the type to fade into the background.