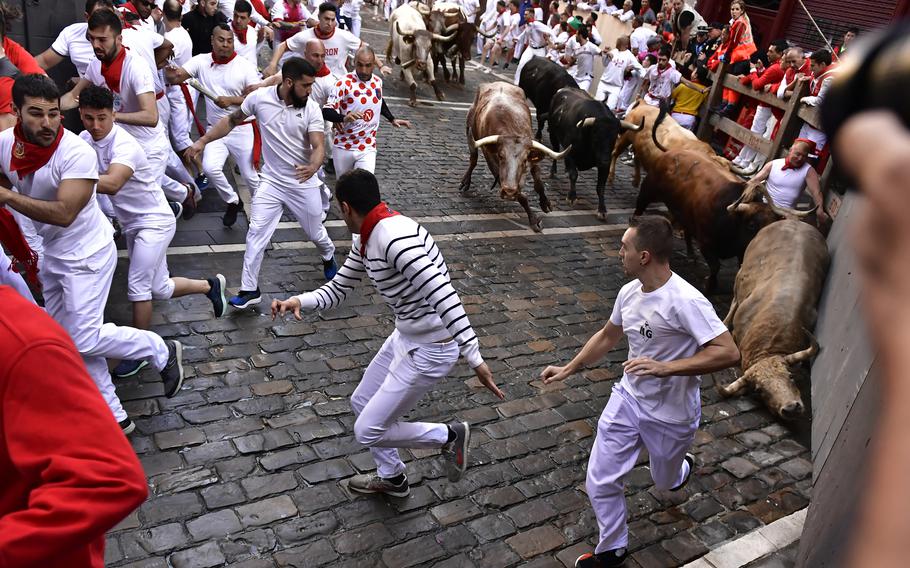 People run through the streets with fighting bulls and steers during the first day of the running of the bulls at the San Fermin Festival in Pamplona, northern Spain, Thursday, July 7, 2022. (Alvaro Barrientos/AP)

PAMPLONA, Spain — The first bull run in three years took place Thursday at the San Fermín festival in the Spanish city of Pamplona. No one was gored, but several runners took knocks and hard falls as tens of thousands people reveled in the return of one of Europe's most famous traditional events.

Six bulls guided by six tame oxen charged through Pamplona's streets for around two minutes and 35 seconds without provoking too much carnage among the thousands of observers and participants cramming the course.

Several runners were stomped, trampled or shoved to the cobblestone pavement. A animal's horn smacked at least two men in the head, but neither suffered a skewering.

The Pamplona hospital said six people were brought in for treatment. They included a 30-year-old American man who fractured his left arm and a 16-year-old Spanish boy who lost part of a finger in the bullring, where a pile-up of runners occurred at the entrance. Four Spanish men between the ages of 19 and 45 also were injured.

Ryan Ward, an American tourist from San Diego, California, said the risk of running with the bulls was well worth the rush.

"I feel like I need to cry. It's just so many emotions built up in me, running with 'mis amigos' (my friends). I don't know where they are, I lost everyone," he said after finishing the bull run unscathed.

"It felt like two seconds, it was probably like a minute when I actually had the bulls running by me, but it felt so quick, like a blink and it was gone," Ward continued. "It's amazing, incredible, one of the best experiences I've ever had."

Eight people were gored during the 2019 festival, the last held before the coronavirus pandemic. Sixteen people have died in bull runs since 1910, most recently in 2009. 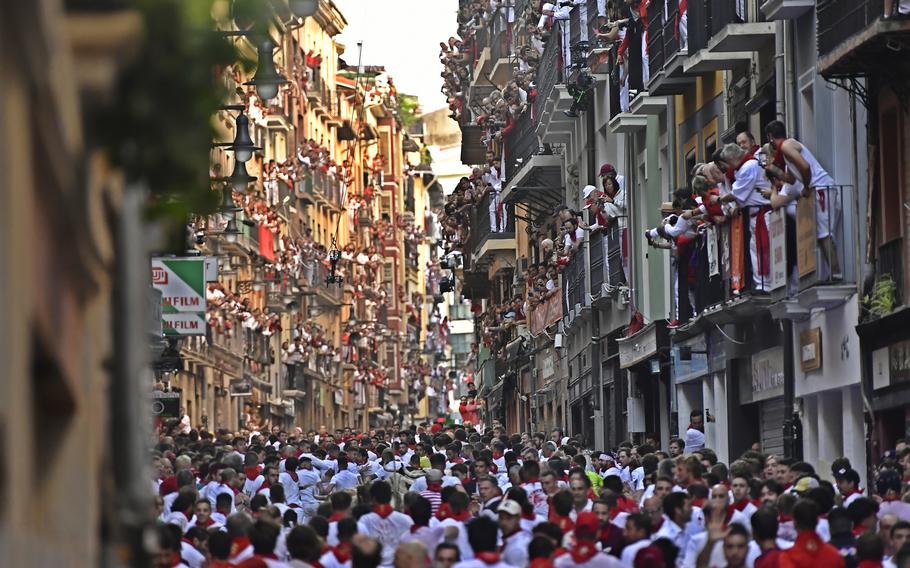 People run through the streets ahead of fighting bulls and steers during the first day of the running of the bulls at the San Fermin Festival in Pamplona, northern Spain, Thursday, July 7, 2022. (Alvaro Barrientos/AP)

The bulls that run each morning are killed in the afternoon by professional bullfighters. Animal rights activists have campaigned against the slaughter of the animals, but bullfights are still popular among segments of Spanish society and an integral part of the San Fermín festival.

The incredibly popular Pamplona festivities were canceled in 2020 and 2021 due to the pandemic.

Spain's strong vaccination program has allowed life to return to more or less normal, but a recent uptick in cases led Pamplona authorities to recommend using face masks when necessary. That said, masks were a very rare sight among the throngs of people packing the city's square for the official kickoff of the party on Wednesday or during the first bull run.

Thousands of men, and some women, participate in the "encierros," or bull runs, trying to avoid the massive bulls and oxen that thunder along the narrow, twisting cobblestone streets of Pamplona's old quarter.

The course of 875 meters (956 yards) is sprayed with a substance to help prevent the bulls from slipping on the tight corners. The run usually is over within three heart-stopping minutes.

Expert bull runners, mostly locals, try to sprint at full steam just in the front of the bull horns before peeling off at the last second. The inexperienced, a group that includes most foreigners, do well enough to scramble out of the way, often ending up in piles of fellow runners.

Almost everyone in Pamplona this week wears the traditional white shirt and pants with red sash and neckerchief for the festival.