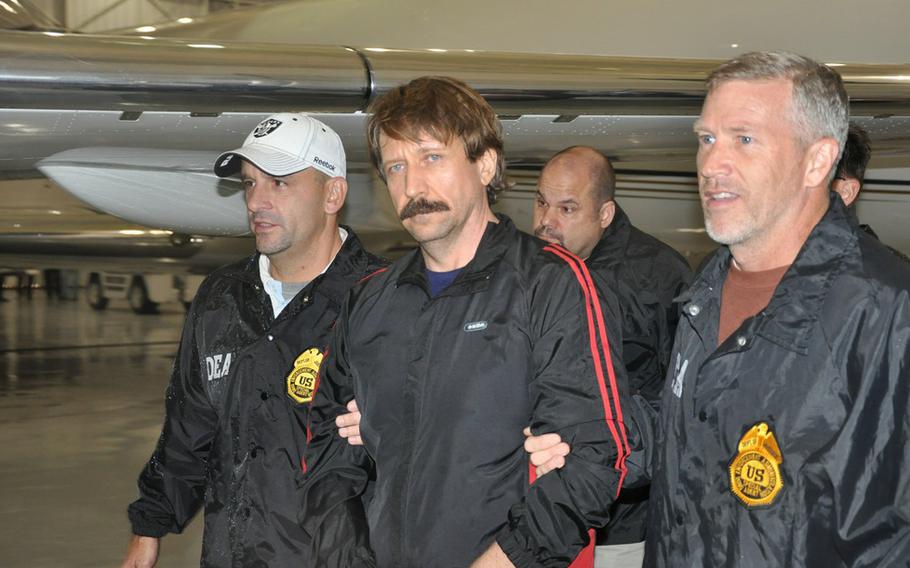 The fate of two Americans detained in Russia could depend on what the U.S. government decides to do with an imprisoned Russian arms dealer nicknamed the “Merchant of Death,” whose wild exploits once inspired a Hollywood film starring Nicolas Cage.

Viktor Bout, 55, is a former Soviet military translator who became an international air transport figure after the fall of communism. Bout is currently serving a 25-year sentence at a medium-security prison in Illinois for conspiring to kill U.S. nationals and selling weapons to the Revolutionary Armed Forces of Colombia (FARC).

The Kremlin has long pushed for Bout’s release, calling his conviction “unlawful.” And in recent weeks, media reports in Russia have hinted that he could be swapped for WBNA star Brittney Griner and former U.S. Marine Paul Whelan.

On Friday, Griner appeared in a Russian court to face drug charges stemming from her arrest at Moscow’s Sheremetyevo International Airport in February. Whelan was arrested and charged with spying in 2018 — and has called the trial politically motivated.

U.S. officials have declined to say whether the Biden administration is seeking a prisoner swap involving Griner and Whelan. In April, another U.S. prisoner held in Moscow — former Marine Trevor Reed — was released in exchange for a Russian convicted in the United States.

“All that remains is for the U.S. government to have the courage to admit the obvious -- get what we can for Viktor Bout,” Zissou said. “The alternative should be obvious -- no Americans will be exchanged unless Viktor Bout is sent home along with them.”

What led to Bout’s arrest?

Bout was arrested in Thailand in 2008 in a sting operation after spending years dodging international arrest warrants and asset freezes.

“Today, one of the world’s most prolific arms dealers is being held accountable for his sordid past,” Attorney General Eric Holder said when he was convicted in New York in 2011.

The focus of the trial in Manhattan was Bout’s role in supplying weapons to FARC, a Marxist-Leninist guerrilla group that staged a long-running insurgency in Colombia. The United States, which worked with Thai authorities to apprehend Bout, said these weapons were intended to kill Americans.

But Bout had an even longer history of weapons dealing in some of the most dangerous and impoverished places in the world. His relationship in the 1990s with the Taliban led the Los Angeles Times to profile him in 2002, quoting a former U.S. government official who described him as the “Donald Trump or Bill Gates” of arms trafficking. He was also known to have links to Liberia’s Charles Taylor and Libya’s Moammar Gaddafi.

Why would Moscow care so much about him?

Bout himself has denied the charges against him, telling The Washington Post in 2002 that he was simply a man in the “air transportation business” and, presciently, that the accusations against him sounded like something out of a “Hollywood action film.”

And publicly at least, Russian officials have maintained that Bout was an entrepreneur who was unfairly targeted for political reasons. He has become something of a cause celebre in Russia, with government buildings in Moscow exhibiting his prison-made artworks last year.

Zissou said that much of the deterioration in U.S.-Russia relations could be tied to Bout’s case.

“The United States government set out to make a case against him for crimes that could be charged and prosecuted in an American court, and so they lured him into a sting operation,” Zissou said. “This targeting of one of its citizens is seen in Russia as a direct attack on its sovereignty.”

But outsiders have long suggested that Bout had ties to the Russian government that enabled him to gain a foothold in the international arms smuggling world.

David Whelan, the brother of Paul Whelan, said it was “understandable, if disappointing” that the focus was on Bout.

“There are hundreds of Russian prisoners held by the Bureau of Prisons and, if the U.S. decided to engage in a prisoner swap, many more names that might be palatable,” David Whelan said, pointing to one — Roman Seleznev, who has been imprisoned in the United States since 2011 on charges related to hacking and fraud — as another prisoner the Russian government has asked for.

But Russian journalist Andrei Soldatov said that even after all these years, Russia still seemed to care strongly about Bout’s case. He wasn’t just a hacker that was used occasionally by Russian intelligence services like the FSB or the GRU, “he was really important for military intelligence,” Soldatov wrote in an email.

Plus, “he kept his cool in prison [and] never exposed anything to the Americans, as far as I can tell,” Soldatov said.

What is his link to Americans arrested in Russia?

On paper, there is no link.

Indeed, there is little comparison between the enormous accusations against Bout and the minor charges that Griner faces.

Two-time U.S. Olympic gold medalist Griner, whose trial began on trial Friday, was arrested over 4 months ago on charges of possessing cannabis oil while returning to play for a Russian team.

While Whelan was arrested three years prior on espionage charges, his family and friends have said it was inconceivable that the charges are true. In 2020, U.S. officials said that his conviction was a “mockery of justice.”

But family and supporters of both Griner and Whelan have said that they hope a deal can be struck with Moscow that would see the two U.S. citizens released in exchange for Bout. And they have good reason to believe a deal is possible.

In April, the U.S. government agreed to a prisoner swap that saw former Marine Trevor Reed returned from Russia in exchange for Konstantin Yaroshenko, a Russian pilot serving a 20-year prison sentence in Connecticut for drug trafficking.

Though such prisoner swaps between Washington and Moscow are unusual, they are not unprecedented. In 1986, detained American journalist Nicholas Daniloff was swapped for Soviet physicist Gennadi Zakharov. In more recent years, the United States has exchanged prisoners with Iran.

David Whelan said his family was not aware of any discussions about a swap but that they did not expect to be provided information like that anyway.

“It’s also our understanding that there are obstacles within the U.S. government for any prisoner exchanges to happen, obstacles that only President Biden could surmount,” he said.

U.S. Secretary of State Antony Blinken said Sunday that he had “no higher priority than making sure that Americans who are being illegally detained in one way or another around the world come home.”

Bout’s lawyer, Zissou, said that he had not had any contact from the State Department about the case and that the families of Griner and Whelan had been advised not to talk to him.

He said that if a swap does not happen, he plans to file a motion for a reduction of his sentence to time served — as is commonly known as compassionate release. Even if that is denied, Bout could probably be released to an immigration facility 12 months before the end of his term.

That means he could be home in as little as five years, Zissou said.

David Whelan said the focus on Bout underscores how Russia controls the “context of wrongful detention of Americans.”

“It is time for the U.S. government to have a solution to deter them and to take control of the problem. Otherwise, it will always be responding -- in public, if not in reality -- to Russia’s most outrageous demands,” David Whelan added.