Ukrainian borscht gets a spot on U.N. protection list 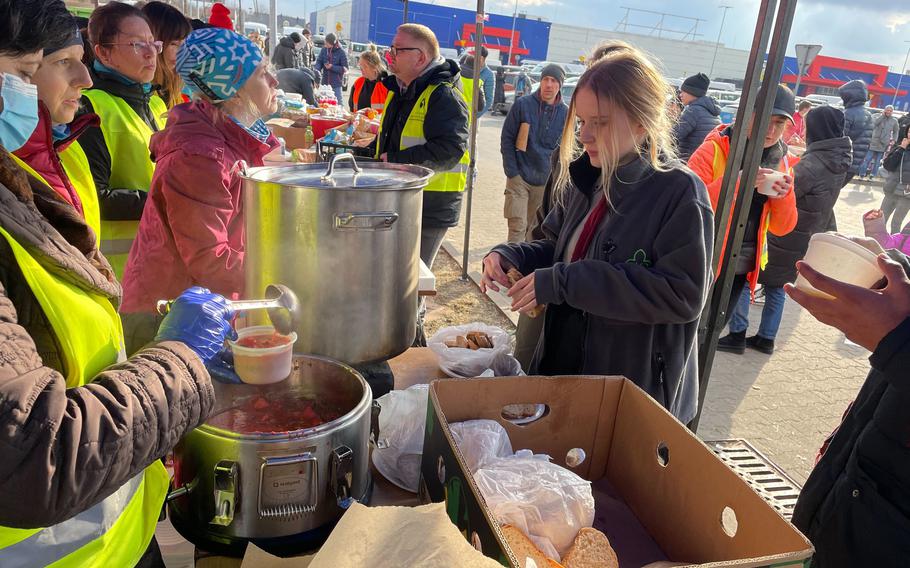 Volunteers ladle out steaming hot borscht at a makeshift welcome center for refugees in a supermarket parking lot in Przemyśl. (Max Bearak/Washington Post)

Ukraine’s version of borscht - the eastern European beetroot soup produced in various forms in countries throughout the region - has been added to a United Nations’ protection list, fast-tracked because of the Russian invasion.

Ukrainian borscht was already on the U.N. intangible cultural heritage list, but as of Friday, it has been upgraded to the grandly named List of Intangible Cultural Heritage in Need of Urgent Safeguarding. According to the U.N. citation, “the displacement of people and bearers threatens the element, as people are unable not only to cook or grow local vegetables for borscht, but also to come together to practice the element, which undermines the social and cultural well-being of communities.”

Borscht is cooked in many different forms, from a pure beetroot barszcz common in Poland, to recipes including mushrooms, fish or sweet peppers. Core ingredients include beet, cabbage, onion, potato and carrot. It is also common in Russia and Romania, leading to culinary disputes about which kind of borscht is tastiest or most authentic.

“Borscht is considered part of the fabric of Ukrainian society, cultural heritage, identity and tradition,” says the U.N., while noting that inclusion on its urgent safeguarding list “does not imply exclusivity, nor ownership, of the heritage concerned.”

Borscht and the best way to cook it have long been the subjects of fierce dispute between Russians and Ukrainians, well before the invasion in February, with Ukrainian chefs drawing up a compendium of regional variations. And, like arguments in Middle Eastern countries about hummus, it is a subject with many partisan advocates but no undisputed claimant, born of traditions that predate today’s national borders.

“Food, like language, is the first and last cultural bastion,” Marianna Dushar, a Ukrainian anthropologist and food writer, told The Washington Post in 2020. “We grow up with it, and we associate ourselves with it. Countries communicate with other countries through food.”

Immigrants to the United States from borscht-making regions have also made the recipe their own. In an article for Bon Appétit magazine, food writer Claire Saffitz called an Ashkenazi Jewish preparation “the greatest recipe of all time.”

“It’s something every grandma teaches their kid how to make,” said Jason Birchard, the third-generation owner of Veselka, a popular, 24-hour Ukrainian diner in New York’s East Village, said in a phone interview, adding praise for the UNESCO listing.

In the wake of Russia’s invasion of Ukraine, Birchard said that all proceeds he makes from selling borscht in-house and online will be donated to humanitarian relief efforts in Ukraine. So far, the restaurant has raised more than $200,000.

“I have customers telling me that they don’t like borscht but they want to contribute $100,” Birchard said.

Duplain reported from London and Tsui from Washington. Robyn Dixon in Riga, Latvia, contributed to this report.