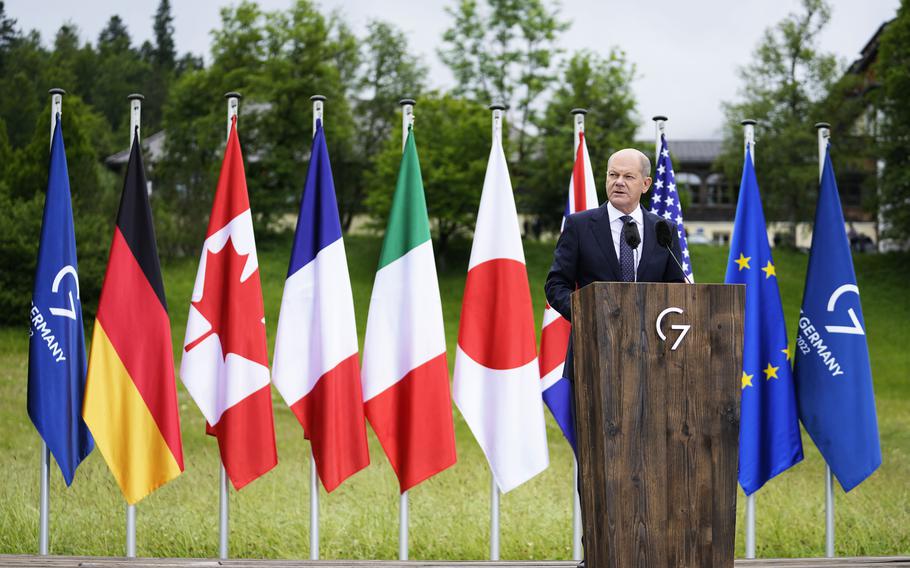 In a pivotal week of European summitry, two of the West’s major geopolitical blocs are focusing on what they were built to do: hedge against the Kremlin.

In the Bavarian mountains, leaders of the Group of Seven nations pledged to back Ukraine “as long as it takes” to successfully resist Russia’s invasion. It described an apparent Russian missile strike on a crowded shopping center in east Ukraine as a “war crime.”

Russia’s presence within the grouping between 1998 and 2014 - the age of the Group of Eight - now seems an aberration. The bloc was initially assembled in the depths of the Cold War as an alliance of the capitalist West’s major industrialized countries. Russia joined in the years that followed the fall of the Soviet Union, an entry that reflected the liberal optimism of the moment. But then the rule of President Vladimir Putin hardened into an ultranationalist autocracy, and Russia’s annexation of Crimea eight years ago led to it being no longer welcome in the club.

The latest meeting of the G-7 saw a slate of moves aimed at ratcheting up Western pressure on Moscow. The group’s nations are pursuing the implementation of a price cap on Russian oil to further deprive Putin of much-needed revenue, while they announced on Sunday a ban on new imports of Russian gold.

“The United States has imposed unprecedented costs on Putin to deny him the revenue he needs to fund his war against Ukraine,” President Joe Biden tweeted, noting that gold is “a major export that rakes in tens of billions of dollars for Russia.”

Biden and most of his G-7 colleagues will next be in Madrid for a NATO summit. The gathering of the West’s preeminent military alliance is set to be a major affair, where member states are slated to announce they will boost the number of forces kept at a high readiness level to 300,000. It’s a direct response to the Russian invasion of Ukraine and is part of the “biggest overhaul of our collective defense and deterrence since the Cold War,” NATO Secretary General Jens Stoltenberg said Monday.

“Transforming NATO’s quick-response force, which has some 40,000 troops, is one of the ways the 30-member alliance is responding to Russia’s invasion of Ukraine,” The Washington Post reported. “Leaders also will discuss plans to bolster the alliance’s eastern flank, outline a new force model, announce funding decisions and publish a strategy document that lays out NATO’s strategy for the years ahead, according to NATO diplomats.”

In 2010, the last time NATO outlined its “strategic concept,” the world seemed a rather different place. “Today the Euro-Atlantic area is at peace and the threat of a conventional attack against NATO territory is low,” the document declared.

Now, for many Europeans, the war is at their doorstep. Far from being an anachronism, NATO is the chief vehicle for their collective security. Pending the resolution of certain Turkish objections, Finland and Sweden are slated to join the bloc. Countries once formerly in the Soviet world are its most vociferous champions.

The war in Ukraine has profoundly shifted the mood on the continent. A recent survey found that more than half the people in each country of the G-7 - which includes Europe’s four largest economies - believe they are in a new Cold War with Russia. “Indeed Italians today are more eager to confront Russia than the generally more hawkish Britons were in November, a sign of how drastically things have changed,” the Economist noted.

Plenty of wrinkles remain. Countries in Eastern Europe fear a lack of commitment and eventual fatigue from partners to the West. More than half of NATO members have not increased their defense budgets during the ongoing crisis.

At the G-7 meeting, divisions emerged over how to reduce pressure on the world’s energy supply, with French officials suggesting the Biden administration should ease its sanctions on oil-producing nations Venezuela and Iran. That may be a domestic political non-starter for a beleaguered White House.

The NATO summit, meanwhile, is set to also spotlight the challenge of China. The leaders of Australia, Japan and New Zealand and South Korea will all be in attendance, in a mark of the Western alliance’s shifting focus on the world stage. But there’s no unanimity on how to face Beijing, with major European powers like France and Germany wary of adopting wholesale Washington’s hawkish and confrontational stance.

But for Russia, the writing is on the wall. The G-7 leaders made clear that Western powers were not interested in finding Putin a diplomatic off-ramp to end the war. “It is up to Ukraine to decide on a future peace settlement, free from external pressure or influence,” they said in a joint statement. “We will continue to coordinate efforts to meet Ukraine’s urgent requirements for military and defense equipment.”

Discussions on those fronts will continue this week in Madrid under NATO auspices. It all underscores a dramatic paradigm shift in Europe. “From Murmansk in the Arctic to Istanbul on the Bosphorus, a new Iron Curtain is falling across Europe - 1,000km east of its Cold War predecessor,” wrote Jeremy Cliffe in the New Statesman.

And Moscow now finds itself in the geopolitical cold. “In Russia, being ‘Russian’ is now defined by genuine or feigned public support for Putin’s war with the west,” wrote Ivan Krastev, chair of the Bulgaria-based Centre for Liberal Strategies. “In the west, being Russian is increasingly identified with not belonging to the west. Many Russians living outside Russia today feel like exiles.”