Ukraine retreats from Severodonetsk as Russia advances in the east 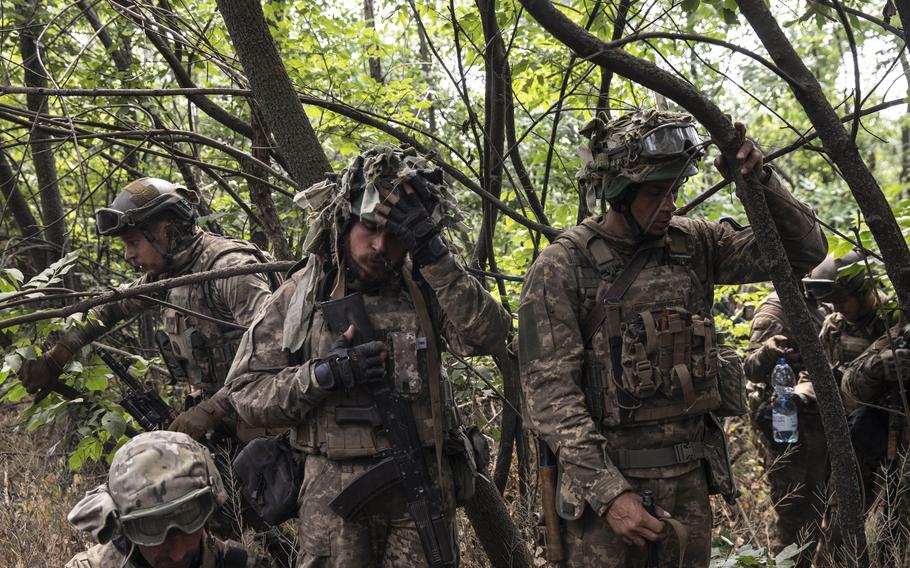 Fearing they spotted a Russian drone overhead, fighters of the Ukrainian Territorial Defense take cover on June 21, 2022, in woods along a road that leads to Lysychansk, Ukraine. (Heidi Levine/for the Washington Post)

As the war in Ukraine grinds on for more than 120 days, Russia has been concentrating its fire power in the east of the country for weeks, specifically on the strategic city of Severodonetsk. Now, Ukrainian troops will be withdrawing from there, says Luhansk regional governor Serhiy Haidai — an effective surrender of the embattled city.

"Unfortunately, we will have to withdraw our troops from Severodonetsk, because it makes no sense to be in broken positions - the number of dead is growing," he said in a video posted on Telegram on Friday. "No one is abandoning our boys, nobody will allow them to be surrounded," he said. "There is no point in simply being there, because with every day the proportional number of dead on unfortified territories could increase."

"No one is abandoning our boys, nobody will allow them to be surrounded," he said. "There is no point in simply being there, because with every day the proportional number of dead on unfortified territories could increase."Ukrainian troops have "already received an order to withdraw to new positions, to new fortified areas," he added.

The eastern city, on the Donets river and normally home to around 100,000 people, has emerged as a focal point of Russia's war in Ukraine. It is one of the last cities standing in the way of Russia's controlling the Luhansk region, and, analysts say, is one of the three cities Russia needs to claim victory in the wider Donbas region after pivoting its focus to eastern Ukraine in April. The city, which has experienced intense fighting, has been largely under Russian control for weeks.

Russian forces have pounded Severodonetsk with artillery and engaged in street fighting, inflicting heavy damage as part of a scorched-earth assault in the east, causing significant casualties among Ukrainian forces.

"The Russians have been shelling Severodonetsk almost every day for four months, the city's infrastructure is completely destroyed," Haidai said, adding that almost 90% of homes have been damaged or destroyed.

Across the river from Severodonetsk, its sister city Lysychansk also is seeing Russian troops advancing, Haidai said Friday, as the Kremlin's forces move to encircle the city just west of Severodonetsk. So far, it remains under Ukrainian control, but the terrain there makes it "difficult" to defend, Haidai said.

He added that some humanitarian supplies had been delivered and a handful of evacuations carried out, but he chided residents as waiting too long to leave.

However, Ukraine's loss of Severodonetsk and Lysychansk "will not represent a major turning point in the war," the Institute for the Study of War, a Washington-based think tank, said in its latest analysis on Thursday.

"Ukrainian forces have fundamentally accomplished their objective in the battle by slowing down and degrading Russian forces," it said. "Russian offensive operations will likely stall in the coming weeks … likely granting Ukrainian forces the opportunity to launch prudent counteroffensives."

Russia has declared that its primary war goal is the conquest of Donbas, Ukraine's industrial heartland, which encompasses the Luhansk and Donetsk regions. Moscow has made consistent, incremental gains there in recent weeks.

President Vladimir Putin recognized the separatist areas of Donetsk and Luhansk as independent before he invaded Ukraine in February, and the United States said last month that Moscow was preparing to annex the regions, along with the southern city of Kherson.

Donetsk governor Pavlo Kyrylenko told Agence France-Presse on Thursday there are few "safe" places left in the region, and he urged civilians to evacuate. He added that Ukraine's forces were primarily focused on holding the major Donetsk cities of Slovyansk and Kramatorsk.

Ukrainians are continuing to carry out "resistance" operations in Russian-held regions of the country, Ukraine's military said Friday in an update. Its outgunned troops have slowed Russian advances largely with weapons supplied by the West. This week, Washington announced a new, $450 million security assistance package, including the heavy artillery that is widely seen as key to Ukraine's defense.