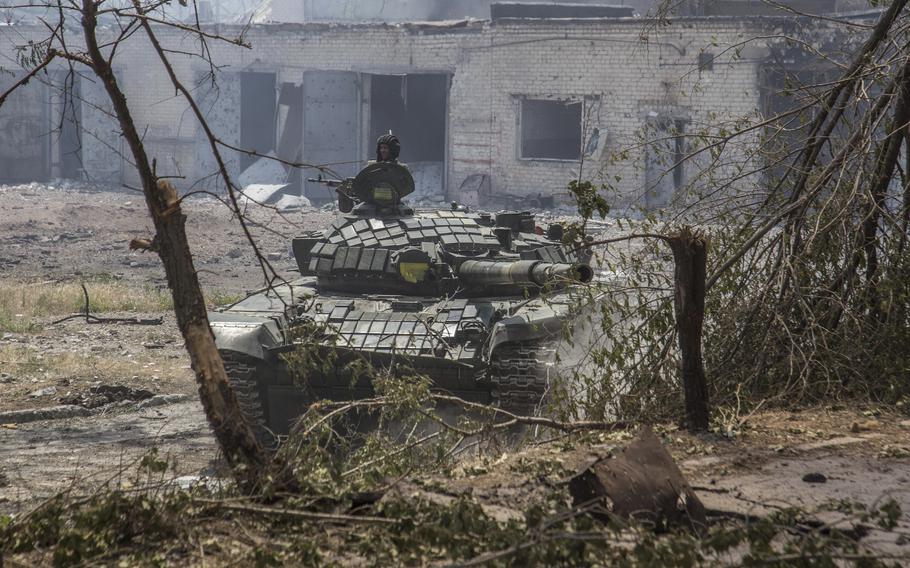 A Ukrainian tank is in position during heavy fighting on the front line in Severodonetsk, the Luhansk region, Ukraine, Wednesday, June 8, 2022. (Oleksandr Ratushniak/AP)

Reporters Without Borders said an investigation it published Wednesday found evidence that Russian forces killed a Ukrainian photojournalist, along with a soldier accompanying him, in a forest near Kyiv in March.

Maksym Levin, whom colleagues called Max, was found dead in April after friends lost contact with him in March. The photojournalist — who had worked for organizations including Reuters, the BBC and Ukrainian outlets — had been reporting near the front lines around the capital, from which Russian forces later retreated.

He is one of at least eight journalists killed doing their work during nearly four months of Russia’s war in Ukraine, Reporters Without Borders said.

The press freedom group, known by its initials in French as RSF, sent two investigators to Ukraine to gather evidence about Levin’s death on the northern outskirts of Kyiv.

The probe, including at the site of Levin’s charred car, indicated the two men “were executed in cold blood by Russian forces, probably after being interrogated and tortured,” RSF said Wednesday, citing photos, testimonies, bullets it collected from the site and other information it gathered.

“The evidence against the Russian forces is overwhelming,” it said.

The 40-year-old Levin — survived by four young sons, as well as his wife and parents — had covered the conflict between Ukrainian forces and Russian-backed separatists in the eastern Donbas region since 2014.

He had wanted to be a photographer since age 15, according to Ukrainian online media outlet LB.ua, where he had worked. His colleagues recalled that Levin once said: “Every Ukrainian photographer dreams of taking a photo that will stop the war.”

After its findings, RSF said it has “not been able to answer all the questions” that remained, but it detailed two scenarios based on the evidence and hoped its reconstruction of events could one day lead to the perpetrators.

RSF said it counted 14 bullet marks in the car and recovered the identity papers of Levin’s friend, Ukrainian soldier Oleksiy Chernyshov, whose body was burned. A gasoline jerrycan and Levin’s helmet were nearby.

Photos from April showed a bullet impact on the photographer’s chest and two in his head, the investigation report added. It said the two were probably searching for Levin’s camera drone when they were killed.

A Ukrainian search team discovered a bullet buried in the ground where Levin’s body was found and spotted what was a Russian position about 230 feet into the forest, which it could not approach because of the possible presence of explosive devices, RSF said. The findings indicate the bullets that hit Levin were “fired from a close range when the journalist was already on the ground,” it said.

The report said that while Levin may have at times provided images from his drone to Ukrainian forces, the use of his equipment was “above all journalistic in nature.”

The group said it shared evidence with Ukrainian investigators and could not confirm whether authorities had performed autopsies, which it described as vital to investigating the deaths.

Fighting had gripped the outskirts of the Ukrainian capital, near where Levin was reporting, before Russian forces shifted their focus to the east more recently. Their withdrawal revealed evidence of war crimes including bodies in the streets, burning and torture. The Kremlin has denied the accusations.

In a post sharing Levin’s work shortly after his death, a Politico journalist described him as thoughtful and also a talented writer.

“He was brave, talented, and dedicated to covering this story,” Christopher Miller wrote. “He talked about peace more than war.”

The Washington Post’s Amar Nadhir contributed to this report.