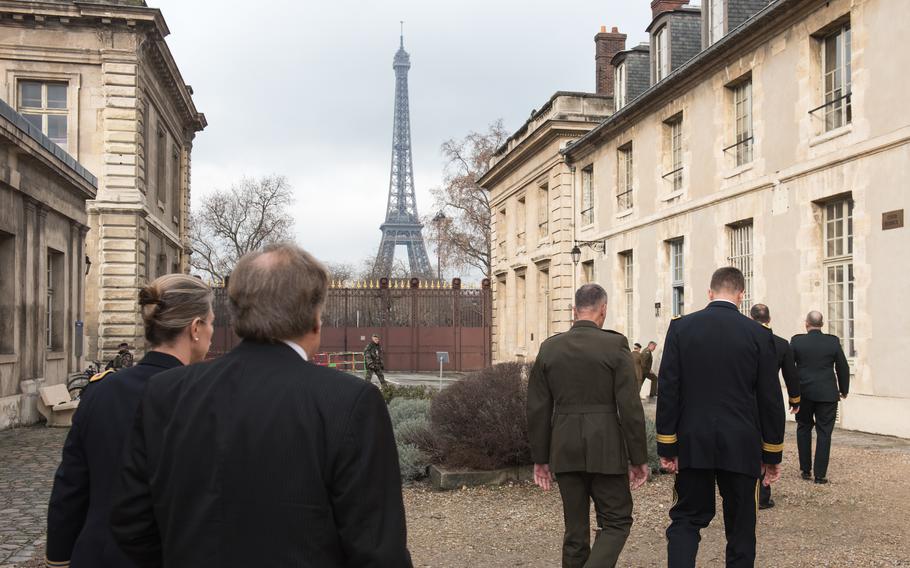 France is expected to see the peak of a heat wave that is hitting countries across Europe with record temperatures in the next few days. (James McCann/Department of Defense)

A punishing heat wave is underway in parts of Western Europe, with widespread temperatures near or above 104 degrees Fahrenheit (40 Celsius) expected through the weekend. Heat is expected to peak in France on Saturday and center over Germany by Sunday, but Spain, Poland and Austria will all feel abnormally high temperatures for the next few days.

Heat has already been building. On Wednesday, Madrid rose to around 105 (40.5 Celsius). The State Meteorological Agency called it the earliest major heat wave in more than 40 years. Similar temperatures were seen across the area Thursday, with official numbers still being tabulated.

Catalonia, a region in northeastern Spain, had one of its hottest days on record Thursday, with a scorching 109 degrees (43.1 Celsius). Saint-Jean-de-Minervois, France, hit 104 degrees (40 Celsius) on Thursday - the earliest the country has hit that high temperature in recorded history.

The heat comes after other major preseason heat events in Europe during May. Spain and France both recorded their hottest May on record.

Locations in Poland, Austria and perhaps even Russia or Ukraine may experience abnormally high temperatures by early next week.

Daytime readings are likely to soar as high as 25 to 35 degrees (15 to 20 Celsius) above normal the next several days across a large chunk of the continent. The most expansive day of debilitating heat may be Saturday, with absurdly high readings stretching from Spain to Poland.

Forecast readings a few thousand feet off the ground are predicted to be in the 99th percentile or greater for much of Western Europe. A snapshot for Saturday, below, focuses on France.

Scott Duncan, a meteorologist based in Scotland, tweeted that the event could be "one of the most profound heat waves in French history. An immense number of records are about to fall."

Temperatures in Madrid, where the heat wave has been underway since Monday, may have peaked or are now near peak. Any cooling is relative, as highs flirt with 100 degrees (38 Celsius) through Saturday.

London will probably escape the worst of this heat wave, but even there, toasty temperatures will run between 80 and 85 degrees (27 to 30 Celsius) over the next few days.

There will be little relief when the sun goes down. Temperatures at night are forecast to run as much as 25 degrees (15 Celsius) above normal.

While daytime heat often grabs the headlines, the lack of relief at night tends to be as bad or worse for a population largely without air conditioning. This is particularly true of those already at risk, such as the elderly, the very young or the infirm, as well as homeless individuals.

In Spain, where significant heat is more common than in other parts of the continent, air-conditioning usage is as high as 1 in 3 for residential homes across the country, and up to 70% in a city like Seville. Estimates of access to air conditioning are much lower to the northeast.

Both France and Germany are reported to have roughly 5% or fewer residential homes with air conditioning, although percentages are probably growing given notable heat spells in recent years. In contrast, more than 90% of people in the United States have access to air conditioning at home.

This early-season spell of intense heat comes at the same time that parts of the United States have been dealing with a major heat wave. Record-high and record-warm low temperatures have covered much of the central and southeast United States in recent days, and another heat pulse is likely to build in the Midwest and push east early next week.

These heat waves over the past month are only a few of a slew affecting the world in the past several years. This spring, India and Pakistan registered their hottest March and April on record amid a series of heat waves, which were 30 times as likely to have occurred because of climate change. In 2021, the Pacific Northwest hit record temperatures in a heat wave deemed "virtually impossible" without global warming.

"Climate change is bringing more frequent extreme weather events. Drought and water shortage are expected in France this summer, with direct damage to agriculture," Marc Poumadere, a risk scientist in Paris at the Symlog Institute of France, wrote in an email.

Heat wave days could double by 2050 in the Iberian Peninsula, according to one study. It finds that as heat waves grow longer and more intense, so will dangers to human health, fire threat and energy demand.

Despite the challenges, there are signs that Europe continues to adapt to the increased frequency of intense heat.

"In 2003, the risks of heat waves were largely underestimated, causing that year in France some 20,000 excess deaths," wrote Poumadere. "France now applies a heat wave plan to limit fatalities."